TODAY IS OPENLY SECULAR DAY, and those who have been following my unfolding saga this week know that CBS Sunday Morning did a timely segment on the Openly Secular campaign featuring me, Mandisa Thomas of Black Nonbelievers, and Todd Stiefel of the Stiefel Freethought Foundation.  If you haven’t watched that piece yet, you can see it here.  The flood of contacts, emails, and new friends on social media has been like a shot in the arm during a difficult year for me.  About those emails, by the way…I promise I will get to them eventually. It’s been a crazy busy week, thanks to this campaign, but I’ll get to them soon.

Two days later, my local paper wrote a follow-up piece about my involvement with the campaign and about my own report of discrimination from a former employer in the metro area.  My town is a pretty provincial place so this second exposure was considerably more dramatic for me locally. Now the preacher boys down at the gym know that I’m the atheist guy, and now the proselytizing will begin in earnest.  I’m already hearing from old classmates I haven’t seen in 30 years, and they’re all ready to tell me things I don’t already know.  To hear the reaction from some in the community, you’d think I’ve committed a felony.

Thankfully, my online friends are always there to back me up. Boy, have they! Their support has meant the world to me, and it keeps me from feeling like I’ve done something somehow morally reprehensible just for asking to be treated like a normal human being.  They’ve been so encouraging, and many have taken to their own social media circles to stand up and be counted among the other openly secular folks in the U.S.

In honor of Openly Secular Day, I’ve posted the video from a talk I did at Apostacon 2014 entitled “Outgrowing Your Closet:  Coming out atheist to religious friends and family.”  In this talk, I give my own advice for how to know when the time is right to “come out” to the people closest to you, and I describe the sorts of challenges you will face along the way.

The full talk is 40 minutes long and can be found at the end of this post.  For those who need something a little shorter, I’ve also included an abridged version here that’s only 19 minutes long, mainly missing the middle portion I did called “Godless Bingo” (also available at the bottom).

In this workshop, I talk about why it’s important to “come out” in the first place. As I said at the end of the CBS segment, the most important reason is that everyone deserves to be at home in his or her own life. The more we step up and identify ourselves, the less stigma will cling to our identity and ultimately the better our lives will be.

But I also hasten to add that “coming out” isn’t always in everyone’s best interests. I would caution my fellow activists to acknowledge that for many folks who live in highly religious subcultures, openly identifying as an outlier can cause considerable damage.  I would advise them to take time and consider if the timing is really right before they do anything rash.  It’s like I told a friend this week:

You gotta do what you gotta do. Just remember that “owning your own life” sometimes means doing whatever it takes not to open the door for others to take things away from you.  If that means staying closeted, then so be it.

Here are the highlights from the video of my advice to those considering becoming openly secular in highly religious contexts:

1) If you’re financially dependent, don’t do it.

2) Take time to build your support network. Do some reading and connecting. Remember there’s a bigger world out there and most would just shrug at this.  The problem is theirs, not yours.

3) When you do it, do it slowly, circle the runway a number of times before you try to land.  Talk about science things and possibly express doubts but not full-on unbelief, because that threatens them. Possibly put it in writing.

4) Use plenty of feeling words instead of fact words because it feels less threatening. Consider not using the “A” word.

5) Empathize.  Count the cost and put some effort into remembering how you used to think.  They will probably not be able to empathize with you (if they’ve never been a non-believer) but you can with them, and that can enable you to be wise about this.  Consider how this strikes them.

6) Remember that you aren’t responsible for your family’s reactions or feelings.  You can only be responsible for handling yourself and your own behavior.  It’s a boundaries thing, and some of us are terrible at this.  Learn to set and maintain boundaries or you’ll be run over.

7) Don’t try to defend yourself. Don’t fall for “debaiting.”

8) Be sure to choose the correct media (in person, via email, etc.) at the right time, setting clear boundaries regarding what they are willing to discuss or not discuss, and the consequences should anyone not respect those boundaries.

Aside from giving advice, I used this talk to summarize the typical responses most of us get from people when they find out we’re atheists. At some level it can help if you know to anticipate these responses so that you can have some time to think about how you would want to respond to each of them. You’ll eventually collect them all, I promise, but in the meantime, maybe you can have some fun and play Godless Bingo to keep it interesting (click image to enlarge). 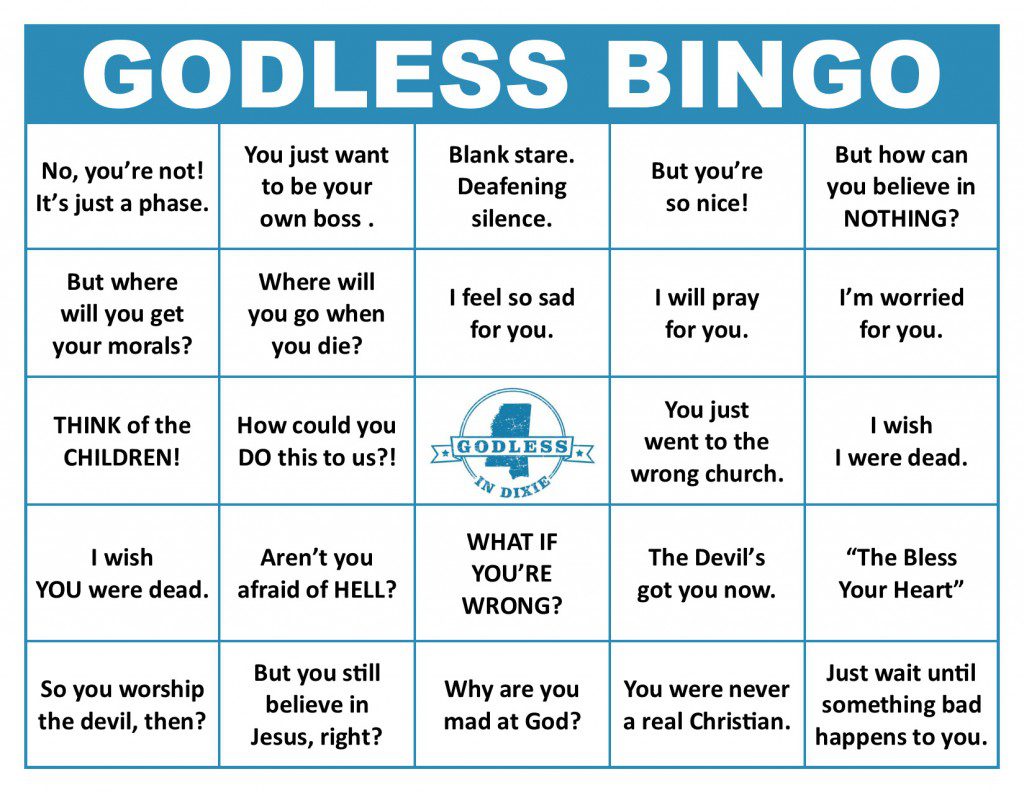 I hope this talk will be helpful to some folks.  It was borne out of personal experience and out of the experiences of a great many friends who have pitched in to give their advice as well.

Finally, if you’d like to view the longer talk (about 40 mins) you can see it here:

Drop me a note if you’d like to know more, and happy Openly Secular Day! 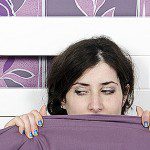 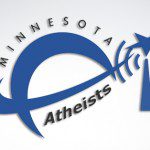