Why God Cannot Forsake You 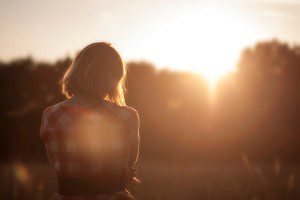 When I first “came out” to some of my closest friends and told them I no longer believe in supernatural things, they were greatly distressed. A few of them got together and staged a kind of “intervention” which lasted about 10 hours one day. As with any good drama, they did their best to provide occasional comic relief so that it wouldn’t be too overwhelming, but they asked a lot of intrusive and confrontational questions:

“If there’s no God, then where did everything come from?”

“If we came from monkeys, how come there are still monkeys, hmm?”

“If there’s no God, then what’s to stop you from raping and killing and robbing banks?”

“Do you struggle with pornography?”

I kid you not. These were the questions I got. This went on all day long. I was very new at this and I didn’t have the benefit of having had conversations like this before, nor did I have any fellow skeptics with whom I could work through my thinking on those matters. I was a new deconvert, so I didn’t answer their questions well. Honestly, I felt a bit cornered by the whole thing. It was only after this was over that I realized how unfair this set up really is. I know too many who have found themselves in this same kind of situation the moment they admitted their loss of faith to their friends and family. Evangelical Christians in particular feel quite threatened when someone close to them leaves the faith.

There is a kind of asymmetry to what happens when people “switch sides.” When you become a Christian, you typically find yourself targeted with a well-organized and time-tested onslaught of emotional appeals, social pressure, (sometimes) scare tactics, and thoroughly thought-through sales pitches which have been honed by centuries of meticulous reworking and refashioning to fit each successive “zeitgeist.” They even offer classes for new members of a church so that you can have answers to the questions you bring to the table. By now this is well-oiled machinery.

By contrast, when a person who was raised within a church tradition leaves her faith, she typically will have few people to talk to about her questions, so her journey is often a lonely one, at least at first. Most people I know who left their faith went it alone. There’s typically not much social pressure to conform to atheism (in fact, probably the exact opposite), no support group, no emotional appeals or mood music, no week-long retreat away from normal life, and no classes to help you work through all the intellectual, relational, and ethical questions you encounter on your way out. In the last few years the internet has produced several virtual versions of each of these things, which helps a great many people connect so that they won’t feel so utterly alone with their questions. But at the time of my departure I had not yet discovered those resources, so I was totally green.

Painting Yourself into a Corner

Toward the end of this all-day interrogation (all in love, of course), they asked me a question which I answered quite poorly because I had given it so little thought:

“What would change your mind? What would make you believe again?”

I answered honestly, that at the moment I couldn’t think of anything which would make me believe the Christian message again. If I hadn’t felt so put on the spot, I would have clarified that all of the things which could really persuade me to reconsider my newfound skepticism were simply things I knew good and well weren’t going to happen. I could have said “Pick any one of the thousand miracles reported in the Bible” but anytime I started talking about needing to see an unambiguous miracle or signs, I was told that was bad. That makes me a part of the “wicked generation” which Jesus reprimands in Matthew’s gospel. My response to that was the very first blog post I wrote for this blog and it explains why it’s perfectly biblical for me to require such proof for claims of divinity.

But I’ve since realized that the real reason why this upsets them so much is that they know too well how likely it is that a person will be disappointed if he banks his faith on seeing clear and present evidence for supernatural claims. The next time someone asks me what I need to see in order to believe, I’ll simply tell them I want to see God heal an amputee. Most sane people will warn you away from seeking evidence that concrete, but what interests me most are the reasons they come up with for why God will not do such a thing. Their confidence about this screams volumes about what’s going on inside their own thought processes. When you’re the one creating a character, you can dictate what he will and will not do.

At the time of my “intervention,” I couldn’t think of any proofs which would convince me, so I was told that I had “painted myself into a corner.” They said I had stacked the deck—rigged the game. I had constructed for myself a situation in which God could not be proven real. With time to reflect on this interchange I see how terribly off this accusation was. In reality, an intervening and personal God should very well be expected to “show up” in some sort of discernible way (at least if the biblical concept of God has any truth to it). It was as if they were switching gods on me mid-conversation, wanting me to accept the claims of a personal, interventionist God while appealing to some kind of non-interventionist god of Deism for the sake of argument. I don’t think people even realize how often they do this. It’s an incredibly inconsistent line of reasoning. But now I see that for what it is. So from now on, I’ve got a different response when someone tells me I’ve painted myself into a corner. Now I will turn around and ask them a question of my own:

Do you believe that God could ever forsake you? What would that look like? Can you describe for me any scenario at all which would constitute God forsaking you?

Think about that question for a bit. I suspect that if most Christians were to ponder this they would have to admit that any scenario they could dream up could quickly be explained away as “God testing us” or “working all things together for good, according to his divine plan.” This question exposes something about the Christian faith which you almost have to be on the outside to see: It is a carefully-wrought construct within which it is impossible for God to do wrong. It doesn’t just mean that his character prevents him from doing evil (and keep in mind here, I believe we’re talking about a fictitious character anyway). What I’m getting at is that this version of God has been so cleverly conceptualized that you cannot find anything wrong with him. It’s not possible. All criticisms of the character of the Christian God have been categorically disallowed because your starting point asserts that all he does must be good, must be loving. Since that is your starting point, your frame of reference, absolutely anything and everything which happens must be interpreted as God being faithful to those whom he loves. No matter how awful the situation, it’s God being good to you. Devastating hurricane? God is good. Child has cancer? God is good. Spouse dies in a car wreck? God is good. Minister molests several church members? People are bad but God is good. Congratulations, you have constructed a framework that necessarily precludes any criticism of God. He cannot be unfaithful to you. You have logically disallowed it.

At the gym where I work out they regularly play popular Christian music overhead (I’ve lamented about this before). Recently they played a song which includes the refrain: “Not for a moment will you forsake me.” I’m familiar with this sentiment, and like most Christians I was taught to remind myself of this notion whenever I find myself in a stressful or worrisome situation. Some of my closest friends and family members still draw comfort from this idea whenever they are afraid or hurting. Part of me is truly conflicted about robbing them of a thing that makes them feel better, so I don’t discuss this with them in person. But it’s still a mistaken notion. It’s ultimately an empty idea. It’s a construct that really says nothing at all because God “being faithful” could mean terrible, awful things happening to you. It really should bring little or no comfort when you think about it. Just ask the character of Job from the Old Testament. This concept of God was built in just such a way that no matter what happens, God is above reproach.

When we are thinking clearly, things like this should send up red flags, warning us that we’ve played a trick on ourselves. Like my interrogators incorrectly suggested about my disbelief, you have painted yourself into a corner so that “God being faithful” becomes a meaningless phrase. I won’t tell you what that means you should believe instead, but I think it can only be a good thing to perform a little meta-cognition to see the games we play with our own minds in order to preserve the beliefs that we were given. 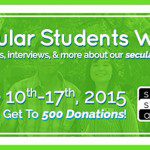 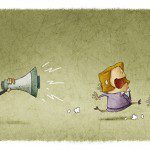 June 14, 2015 Dear Christian Evangelist, Whom Are You Trying to Save?
Recent Comments
0 | Leave a Comment
Browse Our Archives
Follow Us!