Mississippi Votes Against Its Own Best Interests, Again

Yesterday my state voted against adequately funding my children’s education. I’m just heartsick this morning. So incredibly disappointed.  And the voting results don’t even make sense when you add them up.  They only make sense when you consider who opposed this initiative and how they went about defeating it.

Last year 200,000 Mississippi residents signed a petition to amend our state constitution in such a way as to provide accountability for our state legislators, who have consistently underfunded our public education system every year since Obama took office, to the tune of a $1.7 billion shortfall. In a state as poor as ours, that is an awful lot of cutting corners.

In our state’s history we’ve had many initiatives go directly to the ballot for popular vote, but this time our state legislature did something that’s never happened before:  They disliked the one on the ballot so much that they turned around and crafted an initiative of their own—which actually changed nothing—and called it almost the same thing (42-A instead of 42), placing it alongside the voter driven one as an alternative.  And just to make matters more confusing, here is how the options were laid out on the ballot: 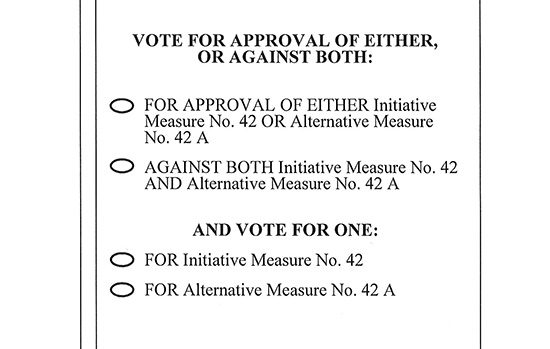 So in order to approve of Initiative 42 (the one that actually made it onto the ballot because of the proper petitionary approach), voters had to choose both the first option and the third option simultaneously.  Any other combination of selections would result in the failure of the initiative, and legislators would continue cutting corners exactly as they have been doing all along, underfunding our schools for as many more years as they keep getting reelected to do so.

If you do the math on the results above, it looks like more than 500,000 Mississippi voters chose to amend the constitution by picking either Initiative 42 or 42-A, and yet only about 300,000 correctly selected to amend the constitution in the question before it.  Do you see what I mean?  That would mean at least 200,000 people voted against amending the constitution, but then chose which amendment they preferred.  Why would almost half the people who voted on this issue have voted in such a self-contradictory way?

Why Are We Voting Against Fully Funding Education?

One possible explanation is that Mississippi voters were confused. The ballot above is not the most straightforward ballot I’ve ever seen.  There originally wasn’t even supposed to be a second initiative. That option didn’t get put there the normal way. Mississippi voters didn’t circulate a petition collecting 200,000 signatures to win the right to place that choice on the ballot. Our predominantly Republican state legislators placed that option on the ballot themselves (and again, their option essentially changed nothing, so I’m not even sure how they could call it an amendment at all).

But I also know that in the months leading up to this vote, the American Family Association (based in Tupelo, MS, and formerly headed up by the infamous Bryan Fischer) advised Christians in Mississippi to vote against this initiative because they are convinced it would only empower liberal judges to hold the state accountable to implementing the federal educational standards found in the Common Core, an educational initiative which fundamentalists and evangelicals in my area have decided is designed to make people gay.  I know, right?

Tim Wildmon, who serves as president of the AFA, advised people to vote exactly as people did above in a memo entitled “Vote NO on Initiative 42”:

If Initiative 42 passes, then one chancery court judge in Hinds County will usurp legislative control over education.

The Bible teaches that the responsibility of educating children begins at home (Deut. 6:6-7). Because of this parents should be free to choose and hold accountable who they partner with. That is in the best interest of their child’s education.

Because representative government through the Mississippi legislature provides the ideal safeguard for the liberty of parents for their children’s education, we oppose Initiative 42.

We also urge that you vote against Initiative 42 on Nov. 3rd by:

(1) voting “Against” amending the Mississippi constitution, and

(2) voting “For” Alternative 42A, keeping a single judge from controlling Mississippi education.

Huh. It turns out that’s exactly what almost half the people who voted yesterday did.  Despite the contradiction, they both voted against amending the constitution and yet they also selected an amendment for approval.  This move was suggested in order to ensure that, in the event that there were more who voted in favor of amending than against it, the amendment that won out wouldn’t be the one that actually empowers another branch of the state government to watch over the legislators to make sure they follow their own law (they voted in 1997 to adequately fund education because evidently they will only do so if forced by law, and even then apparently they won’t do it).

Wildmon makes it clear why he doesn’t trust the judicial system:

Americans have seen this type of judicial overreach and tyranny before. Recently, the federal courts were used to promote the “progressive” agenda by redefining marriage and violating states’ rights. This type of secular, liberal agenda has made its way to Mississippi in the form of Initiative 42, but the agenda is to control K-12 educational policy through one judge in a Hinds county chancery court.

So what we have here just like always is a confluence of factors: People with a whole lot of money to pour into preserving the gap between the haves and the have-nots (the most public push against Initiative 42 was funded by the Koch brothers’ Americans for Prosperity) bamboozled a state already primed to oppose progress because of a series of biases against federal initiatives going back to…well…at least the mid-1800’s. Fighting against “the federales” has been a Southern tradition for more than a century and a half. And Christians in my region have become convinced that fighting homosexuality is the main reason the church exists in the world today. So it wouldn’t take much to mobilize them against an initiative so long as someone they trust tells them that’s what they have to do.

Personally I’m persuaded that growing up in church conditions people to vote as they are told, and all a party has to do is convince a few preachers that their party has the same goals as they do, and voila!  You’ve got a formula for getting large numbers out to the polls to do your bidding, even if that means telling them to vote against adequately funding their own children’s education.

But then let’s be honest.  The people who voted against Initiative 42 were already happy with their children’s education.  The more prosperous districts sided with the legislators on this one because they think things are just fine and dandy thank you very much. It was the poorer districts that needed this the most, and many of them came to this vote confused by what they saw on the ballot.  The smoke and mirrors worked, and another attempt to improve the educational system in my state has failed.

Back to the drawing board. 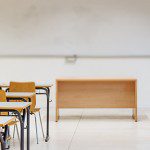 November 1, 2015
When State Representatives Try to Kill Their Own Educational System
Next Post 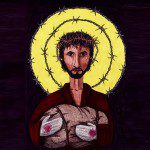 November 20, 2015 On the Futility of Using Jesus to Make People Care
Recent Comments
0 | Leave a Comment
Browse Our Archives
get the latest from
Godless in Dixie
Sign up for our newsletter
POPULAR AT PATHEOS Nonreligious
1