Ordinarily a father can speak freely with his  children about his own faith (or lack thereof) in a fairly unguarded way.  But my situation is more complex than that.  At the beginning of my fatherhood adventure, I was essentially an evangelical Christian.  Now that my girls are entering adolescence, however, I more readily identify with secular humanism and as such I find myself in an awkward situation.  The culture in which they live is almost entirely evangelical, and I myself am not.  To further complicate matters, for reasons that are personal I have not been able to talk with my girls about my own views for quite a while now.  I trust that it won’t be long before I can be more open with them, but in the meantime I will be using this space to write out for their benefit some of the things that I know they will need to hear from me when the time is right.  I know they will have many questions, and I can anticipate many of them because I have already heard them from so many other Christian friends and family who have struggled to understand how a man can go from devout faith to fairly comfortable non-belief.  They will also have some fears which come from exposure to only one side of this ideological divide, and I would like to address those fears and give my perspective on them as well.

I will put these thoughts here not only because it will help me think through what I would like to say to them, but also because there may be others who will wrestle with how to speak to their loved ones about their skepticism towards religious belief.  Just as I have, they too will likely encounter strong and emotional disapproval from some, and they will struggle with how to respond in ways that are constructive.  Maybe in these letters some will find a helpful suggestion or two which can help move discussion in a positive direction.  I welcome feedback, since this is no small or easy thing for me to work through myself.

In short, this page will feature a collection of letters to my four beautiful daughters for them to read when the time is right.  I’ll be posting them here over the next few weeks so check back soon to see what’s been added.

Letters to My Daughters #1:  “We’re Not Bad People”

Posted on July 5, 2013 by godlessindixie

Letters to My Daughters #2:  “Just Be Yourselves”

Letters to My Daughters #3:  “Fighting Fear and Shame”

Letters to My Daughters #4:  “The Beauty and Value of Critical Thinking”

Posted on September 10, 2013 by godlessindixie

Letters to My Daughters #5:  “Life’s Not Black and White”

Posted on October 24, 2013 by godlessindixie

Letters to My Daughters #6:  “On Science, Sexuality, and Social Justice”

Posted on October 30, 2013 by godlessindixie

Letters to My Daughters #7:  “What It Means to Be a Christian”

Posted on December 28, 2013 by godlessindixie

Letters to My Daughters #8: “The Silver Lining in Your Situation” 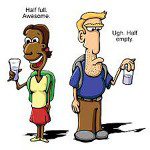 As you girls wrestle with the realization that I no longer agree with or accept so many things which I was taught to believe, and which you yourselves are being taught to believe, at some point you may feel a bit like you’ve been cheated out of a more harmonious family situation.  It would be so much simpler if, like many of your friends you’re growing up with, your parents both saw eye-to-eye on most things…(read more)