The Ultimate Punishment Part One: Introduction

Stanley “Tookie” Williams was a founding member of the West Side Crips, one of the most notorious gangs in all of Los Angeles. Otherwise, a man with a promising future in social work, Tookie’s life unravelled in gang culture. He began using hard drugs, losing opportunities because of his ties to the Crips and friends and family left or died or were killed. It took a toll on Tookie, who stayed briefly in a psychiatric ward after a particularly rough PCP trip.

His life continued to go downhill and at the beginning of 1979, he was accused of a crime spree which consisted of several robberies and multiple murders.

Tookie maintained his innocence from the moment he went down. No one was ever able to prove it, though, and with a guilty verdict in the murders and robberies, Tookie was sentenced to death.

The first decade of his incarceration, Tookie spent the majority of his time fighting other inmates and correctional officers and subsequently lived the hole. Solitary confinement for near a decade seemed to have some effect on the man because when he emerged in the 90s, he had changed. He did a complete 180 and began devoting his life inside to working against gangs and working toward a better life for at-risk kids.

Williams wrote near a dozen books geared towards kids, to educate them about the risks of joining a gang. With nothing but time on his hands, his anti-gang activism consumed him. As a bonafide “OG”, the man had an audience in the gangs that were tearing apart South Central LA in the 90s and with that clout, he negotiated a peace treaty between the rival gangs, the Bloods and the Crips. It was called the Tookie Protocol For Peace, and this accomplishment won him a pat on the back from President George W. Bush himself.

During the span of his anti-gang activism, he was nominated for 6 Nobel Peace Prizes. His books were read widely by at-risk youths,  and his autobiography, called Redemption, was turned into a TV movie starring Jamie Foxx as Tookie himself.

A plea for clemency was made on Tookie’s behalf, citing his good work and perceived redemption. It was backed by thousands upon thousands of people who saw the positive change in Tookie. These people included the aforementioned Jamie Foxx, former Crip Snoop Dogg, Rev. Jesse Jackson, Mike Farrell, Joan Baez, Danny Glover and more. A petition was signed by thousands of people around the world. Even Austria called for California Governor Schwarzenegger to be stripped of his Austrian citizenship if he allowed the execution to be carried out.

The Governor, with piles of Tookie’s post-conviction accomplishments on his desk that won the offender 6 Nobel nominations, took little time at all to decide to carry out the execution.

Tookie’s execution was set for December 13th, 2005. I remember staying up that night, hoping for a stay, but fearing the worst. I was glued to my computer screen. There were a few activists live blogging. It began as they wheeled him into the death chamber. He was asked if there was anything he would like to say and he said,

“My lack of fear of this barbaric methodology of death, I rely upon my faith. It has nothing to do with machismo, with manhood, or with some pseudo former gang street code. This is pure faith, and predicated on my redemption. So, therefore, I just stand strong and continue to tell you, your audience, and the world that I am innocent and, yes, I have been a wretched person, but I have redeemed myself. And I say to you and all those who can listen and will listen that redemption is tailor-made for the wretched, and that’s what I used to be…That’s what I would like the world to remember me. That’s how I would like my legacy to be remembered as: a redemptive transition, something that I believe is not exclusive just for the so-called sanctimonious, the elitists. And it doesn’t—is not predicated on color or race or social stratum or one’s religious background. It’s accessible for everybody. That’s the beauty about it. And whether others choose to believe that I have redeemed myself or not, I worry not, because I know and God knows, and you can believe that all of the youths that I continue to help, they know, too. So with that, I am grateful…I say to you and everyone else, God bless. So take care.”

They strapped him to the gurney. He fought his restraints to deliver a promised smile to his friend and co-author of his anti-gang books, Barbara Becnel. They began to drive needles into his arm, unable to find a vein. They kept poking and prodding, prompting an angry response from Williams, “Are you guys doing this right?”. Some sources reported it went on for 20 minutes, others say it was as long as 35. Either way, cruel and unusual doesn’t begin to describe it.

Tookie, a Nobel Peace Prize nominee, a man who negotiated a peace agreement between two of the most feared gangs in all the world and likely saved lives in the process, a man whose work would have surely saved even more lives in the future, was pronounced dead at 12:35 am Pacific time.

The live blog updated. Newly dating Godless Dad, I sobbed in his arms.

It needs to be made clear here, no one ever asked for him to be freed. No one said he should be able to walk the streets again, or even be placed on parole. No one suggested he should be forgiven for the murders he was convicted of. No one ever once suggested that he should not face punishment for what the law says he did. What was requested, was merely to commute his sentence to life in prison, so he could continue to do his good work from within the walls of San Quentin. There have certainly been lives lost since Tookie’s death that may have been saved if he’d been able to continue his work. Lives that mattered to families. Families who now feel the same devastation and loss as those of Tookie’s victims.

This case makes apparent the emotional engine that keeps the justice system running. If it were truly the most important thing to California citizens to prevent people from becoming victims of similar crimes in the future, they would have seen the value Tookie’s life had towards that end. More than one life would have been spared if he had been allowed to carry on his work, and some of those spared lives would have been innocent; they would have been youths. That’s not what people are interested in, though, and that’s not what the death penalty is about. It’s an emotional response and nothing more. This case makes it very clear what the justice system and the average voter does not actually value the potential to save innocent lives. They value:

And nothing more. This is the ultimate barbaric act. Taking a life that could have saved others, simply because “someone must pay”.

If you call yourself a skeptic, a rational thinker, a person who functions on reason and critical thought, you will see, through this series, the facts are there. There is no reasonable defense for the death penalty.

You cannot, and will never, teach the world to value human life by taking human life.

This is part one in a series about the death penalty. To subscribe for future parts, please enter your name in the sidebar or follow me on Twitter: @godless_mom 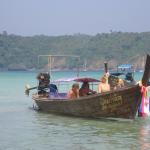 September 21, 2018
Storytime: How An Atheist Experiences Awe
Next Post 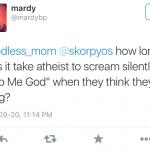 October 2, 2018 12 Times I Felt The Christian Love
Recent Comments
4 Comments | Leave a Comment
"If you don't fear death, then atheism is working for you. When three medical specialists ..."
bill wald 10 New Questions I’ve Never Been ..."
"The Nigerian-American Community and the Embassy in the US would then pressure the Nigerian Government ..."
Christian Death For Atheism: How Do We ..."
"My point is that your "arguments" have been refuted thousands of times already.If you want ..."
TheMarsCydonia Are These 7 Arguments For A ..."
"Looking through the cast of The Odyssey I was looking up what had happened to ..."
lone wrecche How To Say Goodbye
Browse Our Archives
get the latest from
Nonreligious
Sign up for our newsletter
POPULAR AT PATHEOS Nonreligious
1