The Case For Replacing Jesus With Jason Momoa

Alright hetero boys, if you are at all uncomfortable with your sexuality, now’s the time to check out because Mama’s gonna praise the gods of rock-hard man-abs in just a few. Consider this your trigger warning.

A while ago, on Instagram, I posted this meme:

And it turns out it’s not true. See, GM didn’t do her research before posting this, and now I’ve got proverbial egg schmeared all over my heathen face. Don’t worry; I’ll kick my own tuchus later. My laziness is not important. What’s important here is the idea.

What idea is that, GM?

Why, the idea that we could potentially choose a new face to pass as Jesus, of course!

I mean, think about it. When you focus on Jesus in your mind, you picture a man who has hair that could win a Pantene commercial and eyes that could win Harvey Weinstein a fresh new charge on his rap sheet. He looks like a twenty-something globetrotter with a B.O. problem, a hemp backpack and an itinerary that’ll block him from entering the US for the next ten years. You wanna call him River or Blaze. Not Jesus, right?

So, why don’t we replace the image with something a little more… well… suitable?

I am here to propose we do just that. I think we ought to replace the blonde-haired, blue-eyed image of Christ with…

I’ll give you a minute to change your panties, ladies.

Here are the reasons Jason Momoa should replace the face we know as Jesus:

1. He could pass for Middle Eastern better than the image of Criss-Cross Jeebs we have now – Momoa is dark and mysterious with locks of chocolate brown like a Persian prince. He’s got the olive skin that is far more convincing than our existing Jesus’ milky complexion. Momoa is Hawaiian with some of that delicious Pacific Islander blood in him that makes him a far more believable Jesus than… well, Jesus. 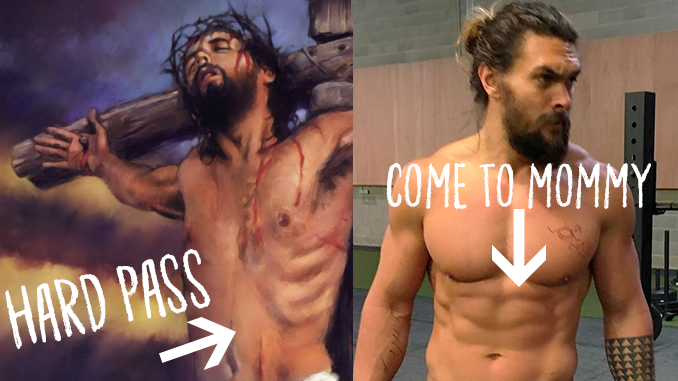 I mean, if you’re a god and you can look like whatever the flip you want to look like, why would you choose to resemble a runway waif whose last meal consisted of a whiff of the essence of kale? Why not choose to look like you were chiselled from the firmament by god’s very hand?

3. You’ll fill more pews – sure they’ll be filled with yoga pants, bejewelled iPhones and Louis Vuitton knock-offs, but they’ll fill up nonetheless. The ladies will flock to your holy house in droves, just to be able to take a moment to run their fingers down the razor-sharp abs on the life-size statue of our Lord and Saviour. Heck, you might even find GM in there one day, ’cause if there’s one thing that’ll make me fall to my knees in worship, it’s Jason goddamned Momoa.

4. He speaks Dothraki – Dothraki is a far more contemporary language than Aramaic, guaranteed to titillate fanboys across the globe. Yep, the abs will bring the ladies to the pews but Khal Drogo’s Athchomar Chomakea will bring enough boys to the churchyard to make Kelis jealous.

5. You might be more successful with your fundraising – under the powerful spell of Momoa’s hypnotizing green eyes, even a hetero man could be talked into handing over his life savings and the man-bun is the perfect place to tuck a twenty.

6. He’s a better role model – not only is Momoa fallible like the rest of us, but his devotion to his wife, mother and children is also inspirational. Further, the man isn’t sitting on the ability to magically multiply food while 25,000 humans beings starve to death every day on Planet Earth. While all-powerful Jesus has, for two-thousand years, had the power to end child suffering of all kinds, but done nothing to that end – not even in his own churches, Jason Momoa has committed to causes his mortal self believes in. In just a few short years of fame, he’s brought clean drinking water to people in need and helped to save the natural Hawaiian landscape.

7. Legend has it he can breathe underwater – makes your floating feet seem like a cheap parlour trick, hey Jeeboner?

And finally, the most important reason to replace our recognized image of Christ with Jason Momoa:

8. Fewer sexual abuse scandals – There are no clergy members willing to stand up to this when they’re caught pawing the kiddos. He didn’t get that eyebrow scar from putting up with nonsense, I tell you what:

So, what do you say? Shall we replace the image of Christ with Momoa? Let me know in the comments! 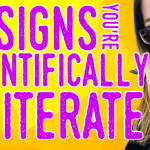 March 28, 2019
How to Know If You're Scientifically Illiterate
Next Post

April 10, 2019 Your Stories of Atheism: I'm A Better Person Without Religion
Recent Comments
30 Comments | Leave a Comment
Browse Our Archives
get the latest from
Nonreligious
Sign up for our newsletter
POPULAR AT PATHEOS Nonreligious
1