Virtue Signalling And Why It’s Okay To Care About The Things You Do April 18, 2019 Courtney Heard 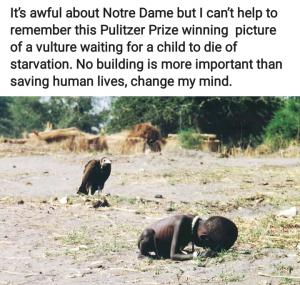 It was the first thing I saw when I logged onto Facebook this morning. This photo, it’s worth noting, was taken by a man who won the Pulitzer prize for it but who later committed suicide. The child, whose name was Nyong, is now dead.

This horrific picture is expressing similar ideas to what many people have been sharing in the wake of the fire at Notre Dame. Said people are taking the time to show that there are much more pressing issues than the fire at Notre Dame that we ought to care about, and I agree. Really, I do.

I mean, at first glance, it seems like a goodhearted sentiment, right? But when you think about it, when you break this meme down, what it’s saying is that if you care about something and it’s not the worst thing, you’re wasting your energy. It’s suggesting that there is an “issue” hierarchy and we must only tackle one at a time starting with what we all deem the worst. The meme is hinting that we cannot care about all things that upset us at once. Ultimately, that means my blogging as Godless Mom is silly until I end the death penalty. Heck, ending the death penalty is ridiculous until we end child poverty. Or is child abuse the worst thing? Do we put off trying to end child abuse until we’ve solved climate change? ‘Cause climate change threatens our very existence, right.? It’s gotta be the most pressing issue there is.

That crack in my shower tiles has got a long time to wait for repair while we fix everything worse, then, right?

The thing is, if I choose to spend Saturday fixing the crack in my tile, it doesn’t mean I don’t care about poverty or the death penalty or wrongful convictions anymore. I am not repairing the tile in place of caring about other issues. If I choose to send a few bucks to help rebuild a church, it doesn’t mean I’ll stop donating to Doctors Without Borders or the Innocence Project. People don’t care about Notre Dame in place of worse problems. Even the maker of this meme decided to make it when they could have been crowdfunding their way to a poverty-stricken country to teach people to grow their own food or build drinking water infrastructure. But the meme-maker didn’t. Instead, they hopped up on their high horse and dropped this exploitative image on us so they could feel superior to everyone who thought it was sad to see a 900-year-old piece of human history burned. It didn’t work though; I still care about losing historical sites like this and all at the same time I can continue to educate people on why the death penalty is terrible and try to normalize the state of being godless so that thirteen countries end its punishment by death. I can, and I do, care about these problems all at once.

With this meme, you are shaming people for having feelings about a building, an inanimate thing but I am sure you’ve been upset about losing or breaking an object before. With this meme, you’re criticizing people who took the time to express sadness over this burning cathedral, and yet, you’ve taken the time to do something even less productive.

If posting about the fire in Paris is considered low because more significant issues are left untackled in our world, how low can we consider taking time out of our day to criticize those who expressed sorrow at its destruction? I mean, you could have used that energy to start a GoFundMe to feed the starving children you’re so quick to exploit for likes.

This meme is not about caring about more significant things. This picture is not about feeling as though there are more outstanding issues. It’s more just about your need to be a contrarian. It’s about standing out from the crowd and propping yourself up on an unstable moral high horse so you can whiff a fleeting moment of superiority.

The fact is, we all care about things that may seem trivial to other people. The truth is, there’s always a more pressing issue. Shaming people is not the answer though, or you’re committing the very same crime. The answer is and always will be to use your energy to set an example. Talk, instead, about what you ARE doing to fix these more critical issues, rather than pointing out what everyone else isn’t doing. Show us how you’ve spent your time so much better than the rest of us. Give us your scorecard, if you will, because if it’s as impressive as you want us to believe, it might inspire others to do good, too.

Until you, yourself, have ceased spending a single moment talking about “trivial” things, though, don’t crap on other people for it. Your hypocrisy won’t feed a child.

April 24, 2019 Death Penalty Conclusion: Capital Punishment Is Irrational
Recent Comments
10 Comments | Leave a Comment
"If you don't fear death, then atheism is working for you. When three medical specialists ..."
bill wald 10 New Questions I’ve Never Been ..."
"The Nigerian-American Community and the Embassy in the US would then pressure the Nigerian Government ..."
Christian Death For Atheism: How Do We ..."
"My point is that your "arguments" have been refuted thousands of times already.If you want ..."
TheMarsCydonia Are These 7 Arguments For A ..."
"Looking through the cast of The Odyssey I was looking up what had happened to ..."
lone wrecche How To Say Goodbye
Browse Our Archives
get the latest from
Nonreligious
Sign up for our newsletter
POPULAR AT PATHEOS Nonreligious
1