Why I Owe Kim Kardashian West An Apology 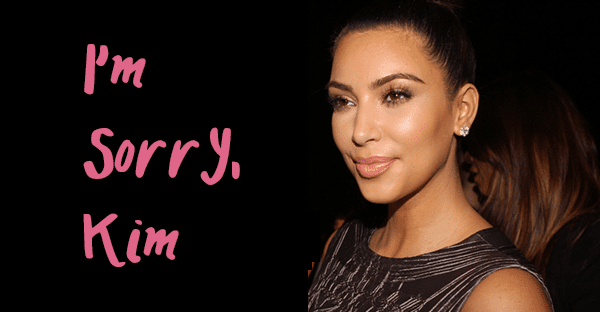 I don’t understand people who say they don’t like Reality TV. It’s such a mixed bag; there’s something in the genre for everyone. I mean, I love watching the strategy in Survivor as much as I love watching the strategy in a good football game. To me, it’s like chess with human pieces. I used to enjoy watching Bam Margera torture his parents on Viva La Bam. Few things have made me laugh as hard as Phil coming home to his entire wardrobe emblazoned with iron-on hamburgers.

Of course, the shows the genre tends to bring to mind the most, for me, are also vacuous pits of mind-sucking nonsense (not that Viva La Bam isn’t, but we’re all hypocrites). Intellectual black holes for the more daft portion of our species. Shows like Paris Hilton’s The Simple Life, John and Kate Plus Eight and of course, the mind-numbing, shrill, culture-killer that is Keeping Up With The Kardashians.

I have never had any time for the Kardashians.

I tried once. I attempted to watch it when a friend insisted I’d love the show. I got about 3 seconds into the muck before I realized that if I waded too far, my sense of self would be held hostage by inanity and creeping brain-rot and there would be no negotiations.

I have always looked at the Kardashian clan as a group of spoiled, self-important rich kids who complain when Mommy doesn’t get their new Lambo wrapped in the right shade of rose-gold.

As a gutter-dwelling, bleeding-heart socialist obsessed with making the world a better place for all the forgotten sorts of people, the Kardashians were my goddamned kryptonite. In my forty-two years here on earth, I don’t even think I’ve been in the same room as anything with the word Gucci on it, save for the knock-off wallet I bought in the red light district of Bangkok when I was fifteen.

Sometimes, though, pieces seem to come together out of nowhere to form a sort of puzzle you didn’t even know you were trying to solve.

I first perked up when it clicked that one of my heroes, Barry Scheck, who is also the co-founder of the Innocence Project, worked closely with the Kardashian’s late father, Robert. I had no idea that Kim Kardashian’s dad was one of OJ Simpson’s lawyers. I knew that Barry Scheck was part of what we duped the “Dream Team”, but I never saw the connection between the Innocence Project and Kim Kardashian. Not until I tried to watch that nightmarish flop they attempted to pass off as a television show, American Crime Story: The People Vs. O.J. Simpson. It was somewhere in that miscarriage of creativity that it finally clicked for me where the Kardashians got their notoriety. Daddy was on the Dream Team.

And then, as though synchronicity were a thing, the pieces to the puzzle just kept falling in my lap. I saw an article posted to Facebook about how Kim Kardashian had been quietly fighting to raise awareness for the same prison issues I have obsessed over for decades. I caught a story on Philip DeFranco’s show that mentioned her prison-issue activism and then I saw her tweet something about the same issues. Finally, just a couple of weeks ago, as I was brushing up on the Rodney Reed case, I found an article that highlighted Kim’s relentless attempts to shed light on this miscarriage of justice.

It all came together. It just kinda clicked into place. Had I given Kim half the chance years ago, I might have realized that she is not as dim as I had thought. I would have known she is a member of the Innocence Project’s extended family. I’d have seen that this woman is anything but the airhead I thought she was and is precisely the sort of person these issues need to become part of the zeitgeist.

I had done Kim wrong it would seem.

I mean, sure, she enjoys the fluffier stuff in life, but if we’re being honest, I do too. I spend way too much time thinking about the perfect bowl of ramen, and I have a makeup collecting problem that could land me on the show Hoarders one day.

The fact is, Kim Kardashian has a massive platform, and she is actively using it to affect real change for marginalized people. Not only does she work tirelessly to raise awareness for prison issues, but she experiences success at it too. In 2018, her activism directly led to Donald Trump signing into law the First Step Act, which is a prison reform act aimed at reducing recidivism. The bill, according to Wikipedia,

After Trump signed the act, Kim was recognized as the reason he did so.

This is more than enough to earn my respect. But this woman is currently studying to pass the bar exam, too. She doesn’t need to. She’s worth hundreds of millions of dollars. She has a lucrative career and owns brands that rake in more money per year than you or I will see in our lifetime. She does not need to become a lawyer. She is doing it because she’s passionate about the same causes I am.

I apologize because I was wrong.

I’m still not going to watch your television show, but I’m on your side, now. I never thought I would say this, but Kim Kardashian West, you have an ally in me. 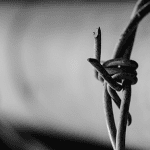 November 13, 2019
In Seven Days, We All Become Killers
Next Post 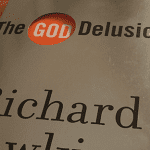 November 19, 2019 Atheists Deny Themselves This One Question?
Recent Comments
10 Comments | Leave a Comment
Browse Our Archives
get the latest from
Godless Mom
Sign up for our newsletter
POPULAR AT PATHEOS Nonreligious
1