When retired U.S. Supreme Court justice John Paul Stevens recommended recently that we toss out the Constitution’s Second Amendment — the one about guns — a whole lot of Americans freaked out.

You’d have thought he wanted to toss a passage in the Bible.

But here’s the thing: The Constitution is not sacred, as isn’t the Bible. The American founding document is entirely temporal — imagined and written solely by and for human beings. If a divinity did have a hand in it (as many dreamily insist), no unimpeachable proof exists to corroborate that. So, from all rational appearances, it’s a thing we made ourselves.

Perhaps more to the point here, it’s also a manmade creation we have the absolute authority, even the responsibility, to revise as makes sense, not in a static netherworld but in the constantly evolving real one.

Same deal for the Bible, which is also wholly inspired and crafted by humankind in the natural world and provides no irrefutable evidence of supernatural assistance.

So, insist as we may, neither the Constitution nor Bible is manifestly divine. They are simply books we have written ourselves for our own purposes. Each is occasionally sublime, in their own fashion, to be sure, but also flawed in sometimes supremely ungodly ways. Think of the slaughter of innocent women and children frequently demanded by God in the Old Testament, and the Constitution’s original codification of slaves as only partially human (two-thirds, to be exact).

But, unfortunately, a lot of Americans still refuse to see it that way. So, when ex-Justice Stevens suggested throwing away the Second Amendment, a lot of folks irrationally interpreted that as tantamount to heresy, plain and simple.

It’s probably a lot of sound and fury signifying nothing, because the obstacles to amending much less repealing the Constitution, for all practical purposes, are a bar too high. Indeed, we couldn’t even get all the states to agree that women should have equal rights with men. While the Founders reasonably worried about creating a founding document of our democracy that might be too vulnerable to impetuous revisions, how they ultimately structured the Constitution for long-term stability also made it near impossible to even throw out the bathwater when necessary, much less the baby.

Which brings us back to John Paul Stevens.

The now 97-year-old jurist wrote in a March 27 New York Times op-ed piece that the recent student marches to promote greater firearms control in the U.S. were a reflection of public opinion turning sharply against the increasingly lethal hazards posed by guns in America.

“That support is a clear sign to lawmakers to enact legislation prohibiting civilian ownership of semiautomatic weapons, increasing the minimum age to buy a gun from 18 to 21 years old, and establishing more comprehensive background checks on all purchasers of firearms.”

But the demonstrators — and the American people — should go farther, he urged, and “demand repeal of the Second Amendment.” Stevens stressed that the genesis of the original amendment, now obsolete — “a relic of the 18th century” — resides in the idea that “a well-regulated militia” was a necessary for states to protect their sovereignty against an envisioned federal standing army (which didn’t exist when the amendment was written).

Does a rational American still actually believe that even AR-15s could hold back the federal government, if, indeed, it actually posed an imminent authoritarian threat to U.S. states at all? After all, isn’t ours a democracy of, by and for the people, an inherent bastion against federal tyranny, where the people at the ballot box have the overriding power?

Stevens explained in his op-ed that until the late 1980s, U.S. courts, including the Supreme Court, consistently upheld that the Second Amendment’s reach was limited, and that reasonable restrictions could apply. Then, toward the end of the millennium, the National Rifle Association began to push back against those assumptions. Stevens wrote:

“When organizations like the National Rifle Association disagreed with that position and began their campaign claiming that federal regulation of firearms curtailed Second Amendment rights, Chief Justice Burger publicly characterized the N.R.A. as perpetrating ‘one of the greatest pieces of fraud, I repeat the word fraud, on the American public by special interest groups that I have ever seen in my lifetime.’”

Nonetheless, the high court in its District of Columbia v. Heller decision in 2008 overturned previous precedent, ruling that the Second Amendment guaranteed an individual right to gun ownership. Stevens was among the four dissenters in the split decision. He now calls the decision not valuable precedent but “a propaganda weapon of immense power.”

“Overturning that decision via a constitutional amendment to get rid of the Second Amendment would be simple and would do more to weaken the N.R.A.’s ability to stymie legislative debate and block constructive gun control legislation than any other available option.”

What Justice Stevens is saying is that staggering gun violence in America is such a compelling societal issue that blocking any means of effective firearms control for knee-jerk, doctrinaire reasons is counterproductive. The problems of the real world demand fealty to real-world solutions, not the moot words in a document indefensibly stipulated as divine.

We need to remember that the Constitution isn’t sacred — not one word. As aren’t any words ever written by humankind. They should be changed if necessary, as reason (not chimera or self-delusion) compel. 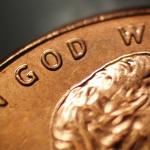 April 29, 2018
The Chaplain is Gone. Long Gone the Chaplain.
Next Post 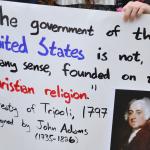 May 1, 2018 Hooray: A Caucus for Freethinking U.S. Representatives Debuts
Recent Comments
0 | Leave a Comment
Browse Our Archives
Follow Us!