Religion, Guns and Trump are Killing Us. Pass it On.

Suddenly, after yet another multiple-fatality shooting in America, the latest yesterday at a venerable newspaper office in Maryland, I’ve reached the end of my rope.

I no longer give a flying flock of fairy flycatchers what either the 1st or 2nd amendments say.

They both need to go, in part. Or, at bare minimum, be radically rewritten.

To keep saying the 1st Amendment, the one about guns, is keeping us safer than we would be otherwise, is pure invention. A lie. I guarantee you those five people who died instantly in Maryland yesterday weren’t safer. Or were ones gunned down earlier. Or the rest of us today. Yet Thursday’s victims probably felt unreasonably secure right up to their final terrifying moments.

The illusion of safety

It’s simply a conservative Republican illusion born of a coward’s debilitating fear that the more than 300 million firearms already in private hands in America have somehow shielded us from anything. Just look at the depressingly mounting body count. Over decades.

Admit it: You gunsters just feel better gripping iron, when it rarely actually saves you from anything. Right?

Sure, every once in awhile some guy who happens to have a gun at home shoots a burglar and thus protects his family. But far more often, the burglar shoots him (or her). Often with their own gun.

And, honestly, do we really want to live in country anyway where everyone is armed to the teeth like in Dodge City, Kansas, circa 1870s and ’80s, where, even there, authorities eventually forced visitors to surrender their firearms while in town because it got too friggin’ dangerous what with all the gratuitous gun-slinging going on.

Let’s stop kidding ourselves that the 2nd Amendment says what the gun lobby and NRA insist it does. It doesn’t. It simply states:

“A well regulated militia, being necessary to the security of a free state, the right of the people to keep and bear arms, shall not be infringed.” (Note that the framer’s first mistake, before not realizing how powerful, simple and many-bulleted guns would become, was not to put a hyphen between “well” and “regulated,” as proper usage requires.)

If you were even slightly awake during high school English, you know that everything hinges on the amendment’s first two phrases that cite the need for a “well-regulated militia” to guarantee security in free states. Well, we don’t need volunteer militias anymore to guarantee our freedom; we have police, the National Guard and a standing army. So those opening phrases are now obsolete in the 21st century. And without them, the last two are fully unsupported and irrelevant.

But, if abolishing the whole amendment is too much to digest, I propose drastically rewording it (see italics) to this:

“Protection of private residences, being necessary to the peace of mind of a free populace, the right to keep one two-shot, no-pump shotgun or one manual six-shot revolver in the home shall not be infringed, except for professionally adjudged mental or emotional unfitness. But such weapons are prohibited outside the home, except for hunting or sport shooting, which States will strictly and purposefully regulate and control to as far as possible guarantee public safety.”

The opening of the 1st Amendment, the part about religion, could also use a major facelift. The amendment now reads:

Since freedom to believe in any superstition you want, while clearly ill-advised, is so beloved by people that trying to do away with it is probably pointless. But, in the secular republic that Thomas Jefferson and the other Founders tried to create in America, religion (which definitively is just another word for “superstition”) should not be kept at arms length from government and any publicly funded entity or practice. It should be kept completely out of sight.

To that end, there should be no divine references of any kind, as there are now, on our money, in our official oaths and pronouncements, in the Pledge of Allegiance to the country, in invocations at government gatherings, in school graduation speeches and prayers before football games. This would encompass any government building, such as the U.S. Capitol, where National Bible Week is already a blatantly unconstitutional annual excuse for legislators to fulsomely proselytize about the Christian Lord in the rotunda. In effect, selling superstition to America.

In a nontheist spirit and assuming the primacy of truth over dreamy speculation, I propose this new language (italicized below) for the Sixth Amendment:

“Congress shall make no law or prohibition respecting private superstitious beliefs or practices, if they do no harm to public peace, safety or constitutionally protected personal freedoms or rights, or violate codified secular laws, or willfully indoctrinate children in superstitious fantasies, but Congress can fully prohibit such “religious” practices and expression within government buildings and all other publicly funded spaces and venues; or abridging the freedom of speech, or of the press, unless officially deemed  purposely and flagrantly untruthful, deceitful or inciteful to violence; or the right of the people peaceably to assemble, and to petition the Government for a redress of grievances.”

By the way, the new freedom of speech language above relates directly to President Trump’s personal behavior in flamboyantly deceiving the American people and promoting violence (“I’d like to punch ‘em in the face,” he said at one rally; he offered at another to pay the legal bills of supporters should they physically assault his opponents).

Obviously, religious freedom as envisioned by the framers of our Constitution is not being practiced in the spirit, so to speak, that was originally intended.

Today, people with superstitious beliefs can refuse to execute their government and private-sector jobs based on their illusory assumptions, and not face sanctions; deny public services to American citizens due to their sexual orientation or religious status; vote for an amoral leader, one who violates every one of their ancient beliefs, just to obtain laws that allow them to discriminate against and dominate unlike-thinking but law-abiding citizens; and allow them to brainwash children in often-dangerous ideas (think Heaven’s Gate, People’s Temple, Branch Davidians, et al) that have resisted verification since the dawn of recorded history if not before.

The problem with true believers in superstitions is that they constantly try to insinuate their wispy but charismatic ideas deep into the body politic, into the warp and weft of society, into the hidden recesses of unwitting minds. With time as a powerful ally, that is where the perpetuating damage is done.

Make no mistake, Christianity seeks a theocracy in America, and always has. Take, for example, this disturbing statement by former U.S. presidential candidate and Arkansas governor Mike Huckabee (whose daughter, Sarah, is the Donald Trump’s press secretary):

“We cannot survive as a republic if we do not become, once again, a God-centered nation that understands that our laws do not come from man, they come from God.”

And he’s just the tip of the iceberg.

But before you even go there, read this quote from Saudi Arabian dissident and activist Raif Badawi, author of 1,000 Lashes: Because I Say What I Think (based on his own punishment for speaking out in a theocracy). He knows of what he speaks.

“Any religion-based state has a mission to limit the minds of its people, to fight the developments of history and logic, and to dumb down its citizens. It’s important to stand in the way of such a mentality, to deny it from continuing its mission to murder the souls of its people, killing them deep within while they are still alive and breathing.”

Jefferson, Franklin, Madison, even Adams, would roll over in their graves if they were aware of the Christianity-tinged sectarian irrationality that’s now ravaging their beloved country.

At the moment, President Trump is ruthlessly, un-Christianly separating undocumented immigrant children from their parents with the full support of American evangelicals, whom he has disingenuously courted. Yet I don’t hear the loyal faithful asking, “What would Jesus do?” Because they know the answer. He would be doing the opposite. Likewise, I don’t see them withdrawing their support for this cruel president.

And innocent Americans, including children, are still continuously being mowed down in broad daylight by strangers with guns, as the administration goose-steps in lockstep with the NRA to block any sensible gun laws, much less a badly needed constitutional amendment of the amendment.

You know what would really make America great again?

Far less religious hypocrisy, far fewer guns and any other president than the one we’ve got (except Mike Pence) . 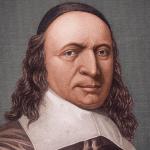 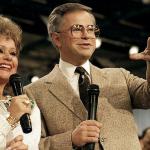 June 30, 2018 Praise The Lord and Other Jim Bakker Nonsense
Recent Comments
0 | Leave a Comment
Browse Our Archives
Follow Us!