How soon we forget.

And we thought we were evolving in a positive direction.

This intractable fearfulness is spotlighted in an excellent New York Times article today by scholar Russell Shorto, an expert in Dutch history in the United States’ colonial development.

Shorto compellingly contends that the persecution and banning of Quakers in the 1650s by Peter Stuyvesant, director-general in the 1650s by the Dutch colony of New Netherland (now New York), closely mirrors the dynamics of the current U.S. policy to block entry to people mainly from various majority-Muslim countries.

Both bannings are based on the prejudicial fear that people of a particular religion are a clear and present danger to society. Now it’s Muslims, because radical Islamist terrorists attacked our country specifically and continue to pile up body counts elsewhere in the world. Then it was Quakers, Christians whose unique worship practices (including vigorous shaking, “quaking”) were viewed as foreign and heretical, and thus socially hazardous, by mainstream Protestant immigrants.

Fast forward to today. Quakers were never an existential hazard to anyone; quite the opposite. They have long been famously nonviolent, peaceful and fervently pacifist regarding warfare. Note that the 37th U.S. president, Richard Nixon (in office 1969-74), was a Quaker, if not a law abider.

Still, in the middle of the 17th century, Quakers had some American colonists quaking in their boots, including Peter Stuyvesant. Shorto writes:

“When Stuyvesant’s frank bigotry (‘an abominable sect,’ he termed the Quakers) was countered by reference to the Dutch principle of religious toleration, he ruled that the need to uphold ‘pax et Concordia,’ peace and harmony, overrode the toleration principle. Mr. Trump likewise shifted from blunt animus (saying during the campaign that he would ‘strongly consider’ closing mosques in the United States) to having his solicitor general argue before the Supreme Court that the travel ban is ‘not a so-called Muslim ban’ but was imposed in the name of national security.”

In fact, as Mr. Trump’s anti-Muslim diatribes during and after his presidential campaign clearly attest, it was precisely a Muslim ban. The only apparent reason the Supreme Court approved the ban is because (as Chief Justice John Roberts admitted) its most recent, disingenuously worded version “on its face” appears “neutral.” The high court overturned the many prior lower court rulings against the ban, all starkly citing the president’s obvious and publicly stated animus against Muslims as evidence of his unconstitutional intent in signing an executive order barring them from entering the country.

This is a patently unconstitutional assault on religious freedom, pure and simple. The majority of the Supreme Court, in a strictly bipartisan decision (5 Republicans to 4 Democrats) simply decided to ignore the president’s own damning words and just accept at face value its deceitfully bland wording (very carefully chosen by the administration to convey to judges a false neutrality).

Shame on these men. They risk the republic to protect reactionary ideology. And kudos to Justice Sonia Sotomayer and Ruth Bader Ginsburg for calling them out in a scathing dissenting opinion.

There were other Sotomayers and Ginsburgs railing against bigotry back in mid-17th century America. But mainstream colonial Christian animus against Quakers was intense. Charles Gehring, who translated a trove of recently released 17th century historic documents from colonial New Netherlands, told Shorto:

“‘The religious leaders in the community were up in arms about the Quakers. People believed they were outside the norms of the faith — that if they didn’t punish them for their behavior it might bring down the wrath of God.’ Whether out of his own bigotry or to appease his base, Stuyvesant wanted them out.”

Some Quakers were hung by prejudiced colonists.

When a small number of Quakers began settling in the New Netherland town of Vlissingen (later Fluising), Stuvesant commanded that no one in town was to harbor them. Thirty non-Quaker residents then issued a defiant document stating they were duty-bound by conscience and Dutch law to accept members of the sect into the community.

“We are bound by the law to do good unto all men … The law of love, peace and liberty,” including “Jews, Turks and Egyptians.”

The push-back by Vlissingen citizens, now known as the Flushing Remonstrance, caused a Struvesant crackdown, in which he arrested and jailed local leaders for “heresy and unseemly lawlessness” and prohibited them from conducting town meetings. He demanded the appointment of a “good, devout, God-fearing and orthodox minister” to be paid by the town.

With disturbing elitism, Stuvesant denigrated the inhabitants of his own unusually diverse colony, now further infested by Quakers, as “the scrapings of all nations.” Wrote Shorto:

“The series of actions Stuyvesant took to try to prevent the Quakers from settling is almost a template for what President Trump has done to restrict Muslim immigration.”

Like the Netherlands, the American colonies in the 1650s held a diverse populace but was dominated by majoritarian English Puritan Christians who tried to homogenize religion in the region to their liking. New Netherland’s citizens, if not its leader, pushed back.

Americans like to think that we invented freedom of religion, but the Dutch embraced the concept — more precisely, “freedom of conscience” — long before us, in their de facto Constitution of 1579 that proclaimed “no one shall be persecuted or investigated because of his religion.”

“That was a watershed in human history,” wrote Shorto.

The Dutch Constitution was codified at a time when Western Europe was wracked by bloody religious strife, where nations embraced state religions ؙ— Catholic or Protestant — to maintain control and social stability.

The religiously and ethnically diverse Dutch, wrote Shorto: “Went in precisely the opposite direction, and proved that tolerance could actually strengthen society.”

So it’s unsurprising that Dutch American settlers resisted Stuvesant’s strong-arm bigotry in Vlissingen. And that Dutch-founded New York would become ultimately a global icon of American diversity and trade, bolstered by its radical founding feature of religious toleration.

We should well remember this as the president of the United States attempts to blockade potential immigrants — and demonize those already here — based solely on their religious beliefs. 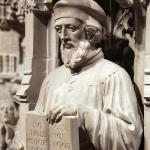 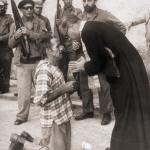 June 29, 2018 Religion, Guns and Trump are Killing Us. Pass it On.
Recent Comments
0 | Leave a Comment
Browse Our Archives
Follow Us!