Why The Heck Do Newspapers Still Publish Horoscopes?

As usual, while reading my hometown newspaper today and the bigger metro one from our state’s largest city some 60 miles east, I noted — with mild despair — the horoscopes printed therein.

I mean, horoscopes (I call them horrorscopes) were revealed to be the functional equivalent of nonsense with the development of scientific astronomy in the Middle Ages. Not that even a few befuddled astronomers didn’t still dabble in it for centuries thereafter.

Yet, there it still remains — every day — in newspapers and god knows where else in American society and probably elsewhere. Although its regular and broad promotion across the nation implies some heft and relevance to existential importance, horoscopes are in fact simply mindless entertainment often arbitrarily written to appeal to a particular publication’s readers not to reflect some encoded eternal truth in the astrological pantheon.

My wife is a Taurus (the bull), while I am a Cancer (the crab) born on the cusp of Gemini (the twins). So we joke that it must all be true because she is far more bossy in temperament than I am (although she bullishly disagrees), and that I will probably die prematurely from cancer because I don’t eat the purportedly healthier natural, gluten- and sugar-free, granular and plant-based, non-dairy, blender-smoothed, utterly tasteless foods she prefers.

When, in fact, she could keel over tomorrow from some mysterious ailment doctors would prove helpless to diagnose, and I could (although it’s highly unlikely) live fit as a fiddle to a ripe old age. It’s mostly genes and luck, after all, not so much whether Big Macs and couch potato-ing comprise too much of our lives. Although, I concur, junk food (as wonderful as it is) probably isn’t exactly a boon to longevity.

But I digress. I was talking about horoscopes.

For this post, I actually checked out my horoscope in the metro paper for folks born under the sign of Cancer during June 22 to July 22 (I was born June 23). My horoscope today advises me:

“Social faux pas are easier than ever to make. An unanswered text or the wrong sort of social media comment could cause dissonance.”

Glad I checked it out. Otherwise, I would never have known these terrible risks I faced just getting out of bed.

I understand that other countries are far more obsessed with and abiding of horoscopes than the U.S., but we can’t feel too smug considering they’re still a mainstay of newspapers and other media in our own country. To be sure, they’re there not because the “information” they contain is valid and substantiated but simply because people for some reason like to read them. Like the funnies, which we can only hope readers don’t think are real.

For the uninitiated, let me explain what horoscopes actual represent: the idea that how the planets are aligned and the cosmos is poised on the day you are born predicts how your life will unfold — unless you “read the tea leaves” and purposely avoid what predestination has divined will happen to you throughout your life without necessary adjustments.

So, apparently, Cancers are extraordinarily susceptible to social errors, failing to respond to text messages or making disastrous comments evoking awful consequences. That is the function of horoscopes, to provide information on whether a day is “auspicious” or not for making major decisions or launching specific events, and what pitfalls await that must be sidestepped.

As an atheist and realist, I just see this stuff as dangerous, much as I see religion, a repository of made-up ideas with no demonstrable link to material reality, other than their inked words on paper. Worse, it’s constant and widespread promotion in media perpetuates irrational thinking, as indoctrination of children in religious fantasies has relentlessly perpetuated unsubstantiated faith over centuries.

As such, in my view, mental-health warnings should be affixed to horoscopes, along the lines of those on cigarette and e-cig vaping packs, such as this 2012 Lucky Strike inscription: “Surgeon General’s Warning: Smoking Causes Lung Cancer, Heart Disease, Emphysema, and May Complicate Pregnancy.”

“American Philosophical Association Warning: Horoscopes are based on pseudo-scientific fictions that have zero substantiation in reality. Subscribing to ideas horoscopes propose will contribute to blunted reason and personal ignorance, and perpetuate expansive silliness to no useful purpose, and they might complicate pregnancy if adherence to horoscopes undermines the advice of credentialed obstetricians.”

In the meantime, I will just continue to be somewhat pointlessly annoyed that horoscopes even exist in American media unaccompanied by warnings of their inherent bogus-ness, and wait for change. 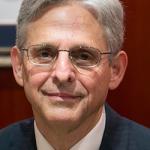 October 8, 2018
We Could Have Avoided All This. Two Words: Merrick Garland.
Next Post 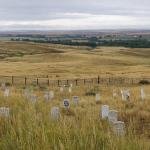 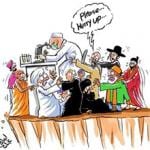 Nonreligious
To trust or not trust God is faith...
Godzooks: The Faith in Facts Blog
TRENDING AT PATHEOS Nonreligious