As I thumbed through my email and magazine in-boxes this weekend, I was again reminded not to grow complacent about evangelical Christianity’s relentless, continuous effort to ram religious ideology deeper into American public life, and, failing that, to quietly insinuate it.

I’m always struck by the sheer un-Christian-ness of such coercive and two-faced behavior. As my very Catholic grandmother used to say (somewhat tongue-in-cheek, knowing her), “You can go to hell for lying just as you can for killing someone.”

Yet, especially for evangelical Christians in America’s currently raging political milieu, they don’t seem to think that aphorism applies to their own self-serving, harmful disingenuity — which is to say callous and covert dishonestly — even though, as far as I know, it’s a cardinal sin in any Christian book.

The end justifies the means?

In other words, to zealous Christians, the end justifies the means when “salvation” is deemed the end.

Which is why they elected and continue to slavishly support President Donald Trump, who is likely the most manifestly un-Christian president we’ve ever had. I have a hard time trying to think of a sin he hasn’t committed, from adultery (serial), illicit fornication (serial), disloyalty to “friends,” not protecting the vulnerable (tearing immigrant kids from their parents), vanity (please), gluttony (just look at his waistline — so sad), lying (oh, please), and boasting (oh, oh, please), wrath and greed.

To be fair, I guess, sloth isn’t one of them; he’s known to be a workaholic. But, rather than a virtue, that’s a kind of character flaw, because loved ones are inevitably sidelined and neglected.

But, still, right-wing Christian evangelicals seem to care nary a wit about the grossly un-Christian flaws in their chosen leader as they continue to gloss over his sins to help pass his patently un-Christian agenda. Anything justifies making abortion harder to access, right? Also, for example, how is it Christian to call any woman for any reason “horsefaced” or insult honorable Americans as “stupid,” “liars” and “bad people”? Or to insist that people born in certain countries can’t be trusted to be fair?

A ‘biblical view of justice’

The latest outrage involves the president’s choice to serve as acting U.S. attorney general, the nation’s highest law-enforcement officer, to replace resigning Jeff Sessions. Longtime Trump loyalist Matt Whitaker, whom the president lied this week that he “doesn’t know,” has said in the past that judges should be Christians with a “biblical view of justice,” and he proposed blocking non-religious candidates from any judicial appointments.

These biases not only promote un-Christian intolerance, they’re patently unconstitutional and fundamentally un-American. He voiced them at an Iowa candidate forum for U.S. Senate in 2014, and videos of his remarks were saved by People For the American Way, a liberal campaign group.

Asked by the moderator at the 2014 event whether he favored a “Levitical or New Testament” view of justice, Whitaker chose the latter, according to an article in the Guardian newspaper:

“What I know is that as long as they have that worldview, that they’ll be a good judge. And if they have a secular worldview, that ‘this is all we have here on Earth’, then I’m going to be very concerned about how they judge.”

So much for religious “freedom” and the constitutional prohibition against religious tests for persons seeking public office.

I found a couple of other incidents of this kind of religious insinuation in the November 2018 edition of Church & State, the monthly periodical of the nonprofit Americans United for Separation of Church and State (AU).

Cross on the highway

One news brief in the magazine (“Supreme Court Asked to Hear Md. Cross Case”) reported that the case was still on the high court’s docket but as yet unconsidered (I posted about this case previously, here). The case, which has been climbing toward the Supreme Court on appeal for a number of years, involves a 40-foot Christian cross at a war memorial on publicly owned and maintained land in Bladensburg, Maryland. A lawsuit was originally filed by the American Humanist Association to have the cross revised or removed because it’s unconstitutional (non-Christian American soldiers are honored there, as well as Christians).

“The government can’t prefer one religion over another, and it certainly can’t do so by placing a 40-foot Christian cross in the middle of a busy highway intersection,” AHA senior counsel Monica Miller told the radio station WTOP near Washington, D.C.

The U.S. 4th Circuit Court of Appeals ruled in the case that the cross is unconstitutional, but a group of Maryland lawmakers, including Republican Gov. Larry Hogan, then asked the high court to hear the case. We await a decision.

Church & State also reports a number of other faith-embed initiatives are being shepherded around the country by Christian Right organizations.

Sneaking ‘In God We Trust’ into schools

Among these are more than two dozen bills in state legislatures are proposing that the U.S. motto “In God We Trust” be placed conspicuously in American schools and other public places, despite its recent emergence and obvious religious message. These measures are in addition to three similar ones last year, and the new ones are being coordinated by conservative lobbying groups such the American Legislative Exchange Council and Focus on the Family, which direct lawmakers in how to word their religion-tinted bills.

“Project Blitz is described as an effort to push ‘traditional Judeo-Christian religious values and beliefs in the public square, and to reclaim and properly define the narrative which supports such beliefs.’”

“In God We Trust” is just the beginning of an intrusive Project Blitz propaganda onslaught across the country, AU warns. The slogan was picked because it is likely to receive the least blowback because it already has government endorsement (it was ill-advisedly passed during the McCarthy era when American terror of a supposed existential threat from “Godless Communism” was at its peak).

AU described the intent of Project Blitz by quoting from its 116-page playbook that has been distributed to more than 750 state legislators:

“Despite arguments that this type of legislation is not needed, measures such as the ‘In God We Trust’ bill can have enormous impact,” the playbook assures. “Even if it does not become law, it can still provide the basis to shore up later support for other governmental entities to support religious displays.”

The camel’s nose in the tent strategy.

Most disturbing about this playbook is that Project Blitz’s first priority, according to AU, is legislation that focuses on “young children” to promote “our Judeo-Christian heritage” in public education. This would include prominent displays of “In God We Trust” and religious documents, plus an emphasis on “Bible literacy” in curricula.

Dishonestly indoctrinating children in contravention of constitutional secular principles of American government is the mortal sin of this enterprise.

Would Jesus say, “Screw those of other faith or no faith. Make them all Christians — dishonestly, by stealth, by any means possible”? 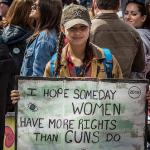 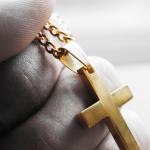