This week I learned that anti-blasphemy laws aren’t the only statutes U.S. state governments still have on their books to enforce religion on citizens.

Regarding Pennsylvania, the New York Times explained in a 2014 report:

“Pennsylvania’s Constitution contains no prohibition, but does say that no one can be ‘disqualified’ from serving in office on the basis of religion — as long as they believe in God ‘and a future state of rewards and punishments’ (a reference to heaven and hell).”

“Mississippi’s Constitution says, ‘No person who denies the existence of a Supreme Being shall hold any office in this state.’ North Carolina’s says, ‘The following persons shall be disqualified for office: First, any person who shall deny the being of Almighty God.’”

Surprisingly, these clearly unconstitutional provisions remain despite unambiguous court rulings against the practice, such as the 1961 U.S. Supreme Court’s Torcaso v. Watkins decision. In that case, the court ruled unanimously that Roy Torcaso, a bookkeeper appointed as a notary public by Maryland’s then governor, could not be blocked from serving because he was an avowed atheist and refused to swear belief in a supreme being as the state’s constitution required. Maryland’s Constitution also still holds that belief in God is required even for jurors and witnesses in judicial proceedings.

In Torcaso v. Watkins, the high court ruled that state are prohibited under the federal Constitution from requiring a “religious test” for public office, citing the First and Fourteenth amendments to the U.S. Constitution regarding freedom of religion (or non-religion) and equal application of rights constitutionally guaranteed to all U.S. citizens under the Bill of Rights.

Complicating these conflicts are echos of the historical realities attending the nation’s creation, as our Founding Fathers sought to fashion a national Constitution via compromises with Southern states that critically relied on slave labor to drive their economies and Northern states, many of whose citizens were viscerally opposed to slavery. Thus was born U.S. constitutional language giving separate sovereign authority to states over all powers not specifically assigned to the federal government.

For example, Article VI of the United States Constitution says no “religious test” should ever be required for federal office but mentions nothing about state offices. Subsequently, many states enacted constitutions and laws regarding religion. In fact, in some colonies in emerging America, taxes were collected and given to religious denominations. But, over time, a legal consensus has emerged in opposition to state religious requirements at odds with federal constitutional ones.

Nonetheless, some states have balked. Ira C. Lupu, an emeritus professor specializing in church-state issues at George Washington University Law School, told The Times that while court cases have been crystal clear that making belief in God a litmus test for public office is patently illegal, the issue is politically fraught.

“Of course [the religious-test requirements] shouldn’t be in there. They’re all unconstitutional. They can’t be enforced,” Lupu said, but, “Which politician was going to get up and say, ‘We’re really going to clean this up’?”

Religious-test statutes have been rarely tested in court since 1992, the Times reported. But in that year, Herb Silverman, a Charleston, South Carolina, college math professor and atheist sued the state when it denied him a notary public appointment for religious reasons. He won in the state’s Supreme Court in 1997. Then, in 2009, atheist Cecil Bothwell was seated on the Asheville, North Carolina, City Council after opponents tried to block him using the state Constitution’s atheist ban but later yielded.

But as secular Americans who are either nonbelievers, skeptical believers or religiously apathetic grow in numbers, activism has increased to remove religious artifacts from America’s bygone past from the nation’s constitutions and laws. The surge in irreligion in the U.S. has been startling in the past several decades, and “nones” (people who check “none” when asked their religious affiliation on surveys) now comprise nearly a quarter of the U.S. population — a larger proportion than Catholics or any single Protestant or other Christian denomination.

Meanwhile, as secular activists try to clean up state constitutions to be more in line with the federal one, nonreligious Americans, particularly atheists, are working hard to improve their generally negative reputation in their still Christian-majority nation. A 2014 Pew Research Center poll reported that nearly half of Americans oppose a family member marrying an atheist, and 53 percent said they would hesitate to vote for an atheist presidential candidate.

“Being an atheist was found to be the least desirable trait a candidate could have — worse than having cheated on a spouse or used marijuana,” the Times article noted.

Openly Secular, a 30-group activist organization that formed in 2014, initially worked to encourage greater acceptance of religious nonbelievers in the U.S. by encouraging prominent people to publicly declare their atheism. The coalition also sought to encourage state legislatures to remove religious-test language in their state laws and constitutions.

But it likely won’t be a slam-dunk.

As then-Republican Majority Whip Christopher B. Shank of the Maryland Senate told the Times several years ago, reflecting many lawmakers’ endemic visceral opposition to anything that seems anti-religion:

“I think what they want is an affirmation that the people of the state of Maryland don’t care about the Christian faith, and that is a little offensive.”

But offensive or not, it’s the law of the land. And so long as anti-atheist artifacts remain in state constitutions, church and state remain illegally entwined.

(Thanks to Wallace Brewer, Science-Friendly Skeptics, for the tip) 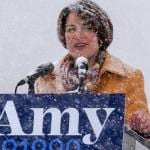 February 15, 2019
A snowstorm isn't climate change. The president should know that.
Next Post 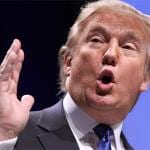