Great scientists like Albert Einstein, Carl Sagan and Stephen Hawking seem to totally get the concept of existential awe, which is why I believe they never cruelly trashed religion while still rejecting its veracity.

In his posthumously published book, “Brief Answers to the Big Questions,” Hawking, the world-renowned British theoretical physicist and cosmologist who died last March, wrote in the first chapter, titled “Is There A God?”:

“I don’t have a grudge against God. I do not want to give the impression that my work is about proving or disproving the existence of God. My work is about finding a rational framework to understand the universe around us.”

Hawking says religion was mankind’s “early attempt to answer the questions we all ask,” such as, “why are we here, where did we come from?” He says humans, even as tough as Nordic Vikings reputedly were, have long looked to supernatural explanations for fearsome natural phenomena that they lacked the knowledge to rationally explain, such as violent storms, lightning and eclipses.

“Science is increasingly answering the questions that used to be the province of religion. … better and more consistent answers, but people will always cling to religion, because it gives comfort, and they do not trust or understand science,” Hawking wrote.

For many centuries, Hawking notes, human beings generally believed that personal handicaps, such as the crippling amyotrophic lateral sclerosis that wracked his own body his entire adult life, were curses visited on them by displeased supernatural super-beings.

“Well, I suppose it’s possible that I’ve upset someone up there,” he wrote, “but I prefer to think that everything can be explained another way, by the laws of nature. … If you like, you can say the laws are the work of God, but that is more a definition of God than a proof of his existence.”

Nothing can strip away ignorance and misconception like science, he says, referencing a historic scientific epiphany experienced by the ancient Greek proto-astronomer and science pioneer Aristarchus of Samos (310-230 BC).

In Aristarchus’ day, the time-honored consensus belief falsely held that everything in the universe revolved around the earth, even the sun, and that eclipses were caused by the gods. However, in his fascination with eclipses, Aristarchus worked out a physical theory, many centuries later proven true, that instead of being random events divinely ordained, eclipses were, in fact, visual effects of heavenly bodies moving in relation to each other.

As did astronomers far into a future dominated by Christianity, Aristarchus was robustly attacked for his theory, which indicated the universe was a dynamic place infinitely larger than anyone else thought possible in his time, and that the earth was likely just one among multitudes of worlds and suns.

“What a stunning realization that must have been,” Hawking wrote. “The universe is a machine governed by principles or laws — laws that can be understood by the human mind.”

Hawking contends that the knowledge science relentlessly and exponentially provides to mankind affects how people, particularly scientists, think or don’t think about divinity.

“If you accept, as I do, that the laws of nature are fixed,” he wrote, “then it doesn’t take long to ask: What role is there for God?”

It’s an “ancient conflict,” he notes, yet the personal, human-like God as described in the Bible seems implausible in the context of “accidental” human existence in a tiny outpost of an unimaginably endless cosmos. So, Hawkins says,

The origin of the universe is one realm where religion is still trying to lay a claim, he wrote, “but even here science is making progress and should soon provide a definitive answer to how the universe began.”

With what he knew about science before he died, Hawking said he believed that the universe was “spontaneously created out of nothing.” His “God,” so to speak, is a Deist-type force like that of third U.S. President Thomas Jefferson and other American Founding Fathers, one that creates everything but then cannot change the laws it simultaneously created to perpetuate its creation.

That said, Hawking was no religious curmudgeon. He was respectful toward faith, but still believed that asking whether God exists is a “valid question for science.”

“After all, it is hard to think of a more important, or fundamental, mystery than what, or who, created and controls the universe.”

For the moment, however, the debate seems to be scored at Hawking, 1, God, 0. 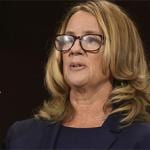 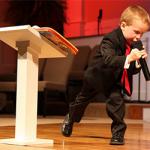 February 4, 2019 This 4-year-old ‘preacher’ should make your hair stand on end
Recent Comments
0 | Leave a Comment
Browse Our Archives
Follow Us!

Nonreligious
Trump says he loves ‘the uneducated.’ He loves...
Godzooks: The Faith in Facts Blog
TRENDING AT PATHEOS Nonreligious