I admit I haven’t yet seen the new Bible movie Mary Magdalene, which hit theaters in the U.S. and Canada on Friday, but my beef with the film has nothing to do, in particular, with what’s in it.

My critique is not of how the film dramatizes the imagined life of Jesus or of his purported iconic disciple, Mary Magdalene, but that the people and events depicted are presented as historical facts rather than the thin speculations they, in fact, are.

As with all biblical re-enactments, the reality of the incidents and players portrayed are largely hypothetical, meaning made-up, due to the passage of enormous spans of time, the necessary unreliability of source documents (Christian scripture) and their authors, the vagaries or nonexistence of historical records elsewhere, and the corruption of objectivity by subjective religious and historical assumptions of the movie’s present-day producers.

So, the history for each of these films is largely imagined or recreated from ancient myths, whether it be Cecille B. DeMille’s grandiose epic The Ten Commandments (1956); Franco Zeffirilli’s gentle and lyrical TV miniseries Jesus of Nazareth (1977); William Wyler’s rousing Ben-Hur (1959); Martin Scorsese’s controversial, sexually charged The Last Temptation of Christ (1988); or Mel Gibson’s blood-and-gore-saturated The Passion of the Christ (2004).

Indeed, reliable historical record, except for some biblical references, does not undeniably confirm that a religious activist named Jesus even existed in Palestine around the cusp of the 1st century AD, or that a reputed prostitute named Mary of Magdala did, or that Jesus was ultimately crucified on a cross, with nails driven into his palms to hold him upright while he died (the physics and anatomical realities of that are doubtful).

We have to accept that the bible is historically accurate in every detail for this story to fairly be deemed accurate. Yet, the New Testament, which concerns Jesus, was not reportedly written until decades after his death, which puts at question all of its proclamations, and that’s before reasonably also being skeptical about the objectivity, factual reliability and even actual identities of the authors themselves.

But the New York Times April 9 review of Mary Magdalene indicates the filmmakers were trying to have it both ways — being fervently Christian and accepting of much of the traditional narrative of Jesus, but also trying to bring a more up-to-date historical tableau than the usual dreamy, heaven-sent quality of many earlier efforts. In his conclusion, Times reviewer Glenn Kenny writes:

“The script often stresses the political struggles of Jesus’s time, and posits the apostles Peter (Chiwetel Ejiofor) and Judas (Tahar Rahim) as, besides seekers of the kingdom of heaven, determined anti-Roman activists.

“In this narrative, Mary is the only follower who truly ‘gets’ Jesus. But because the movie is so apprehensive about the subject of Christ’s supposed divinity, the ultimate gist of what she alone understands never comes across. ‘Mary Magdalene’ dutifully telegraphs the nobility and compassion of its title character while remaining noncommittal about everything else in its path.”

So, apparently the film somewhat objectively allows for doubt regarding the prophet’s godliness and reasonably speculates that he may have been as much a political figure in his time as a religious one. Certainly the Romans viewed him with political apprehension, if the Bible is accurate about his judges.

Yet, as with most Bible-themed movies, the traditional Christian narratives are generally taken for granted as settled history in the lion’s share of opinions written about them.

“The biblical Mary Magdalene only exists in five New Testament lines, which nevertheless make her a key female witness to Christ: among the disciples when he arrives in Jerusalem, watching his crucifixion then keeping watch over his tomb, the first person he meets on his resurrection, and his messenger of this marvel to the disciples.”

That’s a lot of historical power given to a person only extant in five lines in an ancient book, but Chattaway quotes Helen Edmundson, the movie script’s co-writer (with Philippa Goslett):

“Everything else is conjecture,” says Edmundson, who also consulted the non-biblical Gnostic Gospel of Mary in order to write a woman who’s more than just an observer. “We felt that if this Mary was strong enough to leave her home and everything she’d ever known with no going back, to join this group of men who had no idea of what their fate was going to be, then we could make her strong enough to point out to Jesus that if only men can be preached to and baptised, then that’s cutting out half the population. And to be a Mary who can actively baptise and minister in the same way men did. Those things felt fundamental.”

Goslett felt the same, Chattaway writes. She explains, “Telling it from a fresh, female perspective, might our understanding of that journey – and Jesus’s message – be different?”

Perhaps. But so would a lightly historical but highly speculative re-telling of, say, the 11th century Old English epic Beowulf, whose ancient, vernacular prose is somewhat indecipherable to begin with.

Did Jesus ‘use’ Mary’s vulnerability?

In a post about the movie in the Catholic blog Pax Culturati, Kate O’Hare alludes to its interior feminist agenda by focusing on the patriarchal, oppressive environment for women in 1st century Judeo:

“So, in a way, Jesus used the inferior position of a woman like Mary Magdalene to allow her to be the first witness of His Resurrection and relay that back to the Apostles, who didn’t initially believe her. (But honestly, would you have, on first blush?) … But then, Mary Magdalene has its heroine marching off with her band of sisters, spreading the true message of Christ, not that phony, man-made one that Peter and his [disciples].”

All of this is no doubt entertaining but not instructive in the reality of its topic. But, in America, where Christianity rules and Christian assumptions are tacitly accepted that Jesus was exactly as his myth presents him and that the stories surrounding him are all true.

However, in reality we assume far too much, and these entertainments blithely presented as concrete fact to the faithful and the gullible are a disservice and a danger to reason.

These Bible-themed films should fairly carry a disclaimer to the effect:

“This film is a fictional entertainment containing unverifiable religious and historical ideas, and unsubstantiated conclusions regarding unconfirmable supernatural beings and realms.” 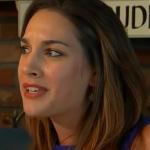 April 13, 2019
During a ruckus over a teacher’s topless photo — a crucifix
Next Post 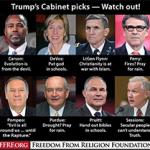 God's Own Free Will
I have written variously on this subject before but wanted to bring...

The Great American Happiness Cliff
Americans are the unhappiest we've ever been. Is it a surrender to...

Pentagon May Ban Confederate Flags from Bases
The Pentagon is considering a plan that would ban the display of...
view all Nonreligious blogs
What Are Your Thoughts?leave a comment
Copyright 2008-2020, Patheos. All rights reserved.