By urging South Dakotans to pray, Gov. Noem insults all who don’t

By urging South Dakotans to pray, Gov. Noem insults all who don’t May 5, 2019 Rick Snedeker

South Dakota Gov. Kristi Noem yesterday urged our state’s residents to spend the day in “solemn mourning and pleas to heaven” in protest against New York and other states that have followed its lead in legally authorizing late-term abortions.

Now, there may be many credible practical and moral arguments against late-term abortion, although Roe v. Wade doesn’t prima facie prohibit the practice.

How does this protect nontheism?

But this post is not about whether late-term abortion is constitutionally protected. It’s about whether nontheism and other manifestations of religious freedom are — and whether it’s constitutionally appropriate for a state’s top elected government official to pointedly encourage citizens to pray to a supernatural being, and to make decisions based wholly on faith.

The problem is that Gov. Noem’s official proclamation declaring April 4 as “a day of prayer and fasting for all … to atone for the unspeakable crime of abortion” would likely be viewed as a directive by many people in the state. Among its citizens are some 20 percent of the populace who are “nones,” meaning they have no religious affiliation or do not believe in anything supernatural (see my 2018 Sioux Falls Argus Leader op-ed on the topic, here).

Gov. Noem’s inducement to pray was ostensibly voluntary but because of the loftiness of her office it was also at the least insulting to those citizens who don’t pray, and at most coercive by implying that those who don’t comply are marginal “others.”

Of course, Gov. Noem is a fervent, evangelical Christian and has been publicly promoting her faith for years in official settings, including sermonizing on the floor of the U.S. House, when she was a member, during National Prayer Week. (See video above of her 2017 sermon.)

That’s not what the founding designers of American government intended, which was that the government be secular in nature and free of overtly religious, particularly Christian, influences. The founders also clearly envisioned that individual government officers would enjoin themselves from promoting religion in general or privileging any religion in particular in the performance of their duties.

However, U.S. courts, including the Supreme Court, have exhibited a lot of difficulty in deciding what is or is not allowable regarding religious liberty under the First Amendment, which simply states:

“Congress shall make no law respecting an establishment of religion, or prohibiting the free exercise thereof.”

The sticking point for our august jurists seems to be that many inherently religious practices, such as official prayers before city council meetings, are seen as “traditional” and thus almost secular acts rather than fundamentally religious in nature.

U.S. Supreme Court Chief Justice Warren Burger said as much in his majority opinion in the court’s 1983 Marsh v. Chambers decision regarding Nebraska traditional practice of opening each legislative session with a prayer by a tax-funded chaplain. The chief justice wrote:

“In light of the unambiguous and unbroken history of more than 200 years, there can be no doubt that the practice of opening legislative sessions with prayer has become part of the fabric of our society. To invoke Divine guidance on a public body entrusted with making the laws is not, in these circumstances, an ‘establishment’ of religion or a step toward establishment; it is simply a tolerable acknowledgment of beliefs widely held among the people of this country.”

But it’s certainly an indirect official promotion of religion — and because these kinds of invocations are virtually always Christian, it’s a promotion of one particular religion. That’s exactly what the framers of the Constitution were seeking to avoid.

Considering the medieval European history of religious conflict and warfare, primarily among Christian sects, it was clear-cut that the U.S. founders — Thomas Jefferson, James Madison, et al. — fervently wanted to avoid the same destructive contentions in their new nation that religious authoritarianism had previously inflicted on Europe. So, keeping religion — particularly the most dominant one — completely out of government was seen as the ticket to political serenity. They realized most people at the time were Christian, but they didn’t want that reality to infect the rational governance of the people, who included a lot of non-Christians and non-believers as well.

This purposeful exclusion was the “wall of separation” between religion and state affairs that Jefferson coined.

The skinny edge of the wedge

What Gov. Noem’s day of “pleas to heaven” proclamation represented was the skinny edge of the wedge of faith cleaving into American government — as happens every time evangelicals succeed in getting a “Ten Commandments” or “In God We Trust” monuments or signs in government offices or schools, and when local and state government bodies open their meetings with (almost always) Christian prayers. They have already succeeded in changing the national motto (in 1957) to “In God We Trust” from the secular original (E pluribus unum — from many, one), and requiring our money to be inscribed with it. (See my 2018 post about this here.)

These are not organic but politically purposeful acts designed to reform American government and day-to-day life as a more theocratic rather than democratic whole.

“Life is sacred from the moment of conception. We know, by the eternal law and evidence of history, that the destruction of innocent life cries out to heaven for justice. With all humility and in fitting fear of perdition, it is thus proper to bow before the unseen author of all life and beg for mercy in atonement for our own sins and the sins of our countrymen, that the cause of our sadness might be lifted from this land and harmony among all restored.” (my highlights emphasize religious phrases)

More than half of the words in this proclamation (47 of 85) are pure Christianity. The rest are basically connecting words to scripturally derived phrases.

Keep in mind that up to 20 percent of South Dakotans do not believe anything is “sacred,” per se, and certainly not that human life become inviolate at the “moment of conception.” Also, we “nones” don’t believe in any supernatural “eternal law,” except maybe the laws of nature, and we don’t implore “heaven” for justice but our governments on earth. We also have zero “fear of perdition,” do not “bow before” anything or anyone, and never beg a divinity for atonement for our transgressions. Many of us also believe that Roe v. Wade is rational and just, and that such questions should be decided down here on Earth, not in “heaven.”

Yet, in Gov. Noem’s world, only outliers don’t believe as she does, not true citizens of her state.

Otherwise, she would not be telling her religiously disinclined or even atheist constituents to do things and believe things against their moral and rational principles.

Keep in mind that the governor last month signed into law a package of religiously inspired bills designed to circumvent Roe v. Wade by making it more difficult for the state’s women to access abortion services.

This kind of faith-based government coercion is precisely what our Enlightenment-influenced founders wanted no part of for the new, evidence-based democracy they were laboring so mightily to create. 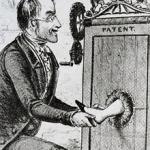 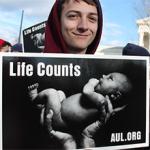 May 6, 2019 Kansas abortion-procedure ruling upholds human over states’ rights
Recent Comments
0 | Leave a Comment
Browse Our Archives
get the latest from
Nonreligious
Sign up for our newsletter
POPULAR AT PATHEOS Nonreligious
1