Evolution is ‘only a theory,’ says Florida’s new Education chairman

In 2008, when he was vice chairman of Florida’s Highlands County school board, citrus grower Andy Tuck publicly opposed then-proposed new state standards that sought to teach evolution as fact in science classes.

At the time, Tuck said:

“… as a person of faith, I strongly oppose any study of evolution as fact at all. I’m purely in favor of it staying a theory and only a theory. I won’t support any evolution being taught as fact at all in any of our schools,”according to Highlands Today.

When Tuck was later appointed to the state Board of Education, in 2014, reporters asked him to clarify his earlier statements on evolution.

“I’m not an evangelical right-winger,” he said, according to Florida Citizens for Science. “I’m not trying to get religion in schools.” he said about his concerns regarding evolution. “… I guess the thing I struggle with is you’re teaching evolution to fifth-graders and you get done and one says, ‘Where did it start?’ And you say what?”

Then, in 2018 he was appointed by then-Gov. Rick Scott to a second four-year term on the Florida Board of Education.

Last month, Tuck was appointed chairman of the education board by its members.

“[Tuck] takes the helm of the board at a time when it is rising in influence, under the management of education commissioner Richard Corcoran. … The board is closely aligned to the Governor’s Office and is taking a key role in overseeing actions including a standards review that Gov. Ron DeSantis has demanded. It appointed Corcoran — DeSantis’ choice for commissioner — without considering other options and is seen as a strong ally in pursuing the governor’s education agenda, which has focused on expanding vouchers, charter schools and other choice options in addition to pushing for improved outcomes in district schools.”

In the meantime, conservative evangelical Christians continue trying to insert faith-based religious concepts of evolution—i.e., “Creationism” and “Intelligent Design”—into the Florida education system under the guise of “teaching the controversies” supposedly surrounding evolution.

In January of this year, the conservative Florida Citizens Alliance crafted a legislative bill to allow school science curricula to include non-mainstream views regarding evolution and climate change because the group claims curriculum currently taught in Florida schools equates to “political and religious indoctrination,” according to an article in the Miami Herald.

If true, that would mean teaching heliocentric “theory”—that the Earth orbits the Sun and not vice versa—is also not established fact (which it is) but, rather, “political and religious indoctrination.”

In fact, because established evolutionary and heliocentric theories authoritatively debunk scriptural doctrines, they threaten the entire Christian program. The Bible teaches that humans were created at once exactly as they are now, and that the Earth is the center of the universe around which everything else revolves, both easily refutable with current scientific knowledge.

U.S. Courts have consistently ruled over decades that biblical theories are not scientific and should not be allowed in American primary and secondary school curricula. A particularly interesting and historic case was 2005’s Dover v. Kitzmiller in Pennsylvania.

Opponents of faith-based pseudo-scientific ideas charge that they are not only factually unsupportable but dangerous to teach as scientific concepts.

Florida Republican state Sen. Dennis Baxley, who sponsored the “teach the controversies” bill early this year, argued that schools need to teach “different worldviews” on scientific subjects like evolution and climate change because textbooks now skew toward “uniformity” of opinion.

“Nothing is ever settled if it’s science, because people are always questioning science,” Baxley told the Miami Herald. “If you look at history of human learning, for a long time the official worldview was that the world was flat. Anything you now accept as fact comes from a perspective and you learn from examining different schools of thought.”

Except it doesn’t. What we now accept as fact are long re-tested and re-proven concepts derived from many evidence-based hypotheses. No facts exist to prove or disprove the existence of deities—the foundations of faith, including Christianity—so such imaginings are not amenable to science. Therefore, to teach them in schools is simply to teach religious ideology, not science, which is unconstitutional.

“Evolution is still described, correctly, as ‘the organizing principle of life science’ and as ‘supported by multiple forms of evidence.’ And the standards distance themselves from the pejorative sense of ‘theory’ that creationists from [William Jennings] Bryan onward like to exploit: ‘a scientific theory is the culmination of many scientific investigations drawing together all the current evidence concerning a substantial range of phenomena; thus, a scientific theory represents the most powerful explanation scientists have to offer.'”

Teaching religious musings as science is also damaging to education.

Ben Kirtman, a professor of atmospheric sciences at the University of Miami, said both evolution and climate change are well-established fact in the scientific community.

“It is resolved,” Kirtman said, referring specifically to climate change. “I find this a way to create artificial doubt about the science to control policy conversation, which is antithetical to the way we do things in this country … The danger is you’re going to have people who don’t have a fundamental understanding of the way science works.”

The upshot of all this is that the new chairman of the board of education of one of America’s most populous states doesn’t know how science works, doesn’t know that the scientific theory underlying all biological science is not the same as believing in invisible, inaccessible beings.

In fact, it’s the difference between crops and “crop circles.” 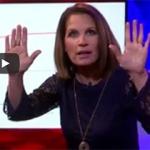 August 3, 2019
Michele Bachmann never got to be president. Now, the bad news.
Next Post 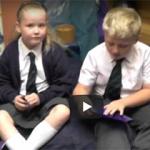 August 5, 2019 Christian worship is compulsory at English and Welsh schools. What?
Recent Comments
0 | Leave a Comment
Browse Our Archives
get the latest from
Godzooks: The Faith in Facts Blog
Sign up for our newsletter
POPULAR AT PATHEOS Nonreligious
1