The sign displayed here perfectly illustrates the special status religion is granted in the United States, and in other countries where blasphemy (disrespectful speech about God or sacred things) is still outlawed, if only partially. 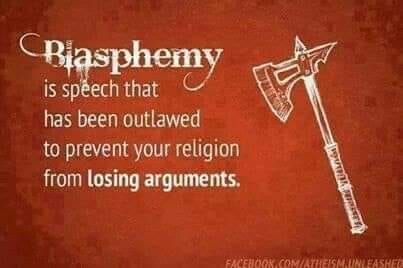 What else are we not legally allowed to so criticize in our free-speech republic? Our democratic ideals and values? The quasi religion of laissez faire capitalism? The sacredness of apple pie?

No, we can trash them all, if we see fit. That’s what it means in a free country with free speech. You can criticize anything … except religion.

Although Ireland and Canada last year tossed all their hoary anti-blasphemy statutes into the trash can of history, America wasn’t quite so energetic.

In a post I wrote about blasphemy laws last year (here), I noted that,

“Whereas no federal statute still exists against blasphemy in America, a number of states still criminalize it, including Massachusetts, Michigan, Oklahoma, South Carolina, Wyoming, and Pennsylvania. But the last person jailed for blasphemy in the U.S. was in 1838, but there have been a number of convictions with fines over the years into the 20th century.”

Proponents of criminalizing blasphemy argue that it protects freedom of religion by outlawing disrespectful slanders against faith. But the U.S. Constitution explicitly prohibits government law from banning any kind of legal speech, particularly religious speech. So any protection is up to believers, who certainly don’t hold back in maligning atheism.

Mostly, blasphemy laws, as this sign says, exist to discourage criticism of religion and, thus, to shut down possibly winning arguments before they get started and presumably ruin everything.

American blasphemy apologists also contend that still having a few old anti-blasphemy laws on the books in a few states is no biggie. Except that true believers keep bringing them up as evidence of the enduring truth and importance of supernatural religion in a “Christian Nation.”

Except it isn’t and we aren’t. 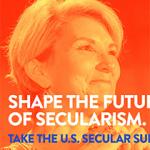 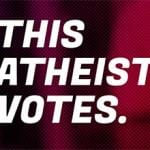 October 20, 2019 Be afraid, GOP. Be very afraid. The ‘nones’ are growing … fast.
Recent Comments
0 | Leave a Comment
"You can always find a bible verse to support whatever evil you please.His "clean slate" ..."
Sophotroph Pew: U.S. evangelicals just don’t care ..."
"Oh indeed. But he never pushed his religion on children."
Jim Jones The Jehovah’s Witnesses church lady, and ..."
"Yes, I agree, "legend" is more likely accurate."
Rick Snedeker In new book, scholar contends Jesus ..."
"I like Ehrman’s point that the “lunatic, liar or Lord” argument leaves out a fourth ..."
Carstonio In new book, scholar contends Jesus ..."
Browse Our Archives
Follow Us!