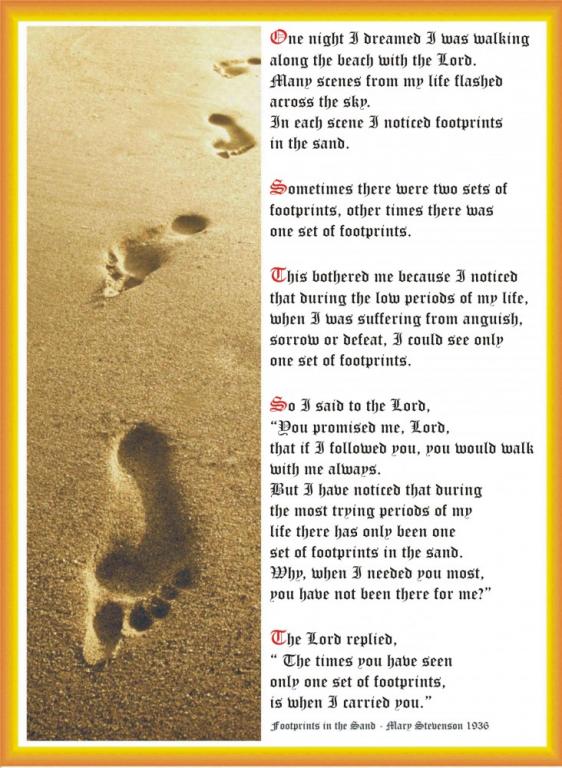 The Christian “Footprints in the Sand” conceit has long been a pet peeve of mine.

To summarize, the meme’s core religious idea (see the embedded image and poem) is that when the poet recalled moments in his (or her) life in dreams, images of footprints in sand always accompanied them. The poet wondered why sometimes there were two sets of prints, sometimes only one — and that a single set always seemed to attend the dreamscapes of “low periods during my life.”

“I said to the Lord,

“‘You promised me Lord, that if I followed you, you would walk with me always. But I have noticed that during the most trying periods of my life there has only been one set of footprints in the sand. Why, when I needed you most, have you not been there for me?’

“The Lord replied, ‘The years when you have seen only one set of footprints, my child, is when I carried you.'” 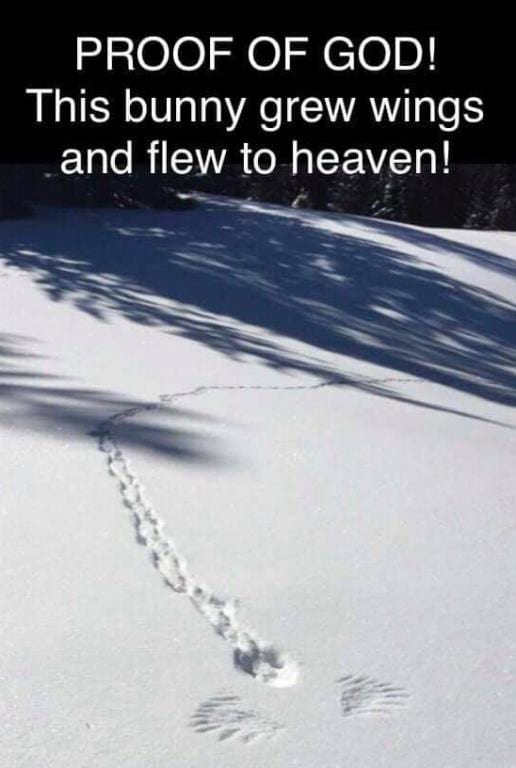 This idea, of course, is pure wishful religious fiction, with no connection to reality. Like supernatural religion itself, it is just a made-up story that religious people choose to believe and somehow find solace in believing.

They choose to accept, as plausibly actual, phenomena never before provably encountered in anyone’s real life — just as all imaginings do not exist in material reality except in our private minds.

Still, there are websites devoted to this poem and various iterations of it accompanied by inspiring photos and illustrations to enhance the power of its fantasy to evoke emotion in believers.

So, when I saw this contrary, tongue-in-cheek take-down of the meme on Atheist Global‘s website, I couldn’t stop wincing. The satirical image purports to show a bunny’s serial footprints in freshly fallen snow — but when they abruptly end, there appears to be tiny “angel wings” etched in the whiteness.

Yes, the idea is that the bunny turned into an angel and flew away. Charming. But completely made up. A far more likely explanation (if this wasn’t actually staged) would be that a descending hawk snatched the little rabbit into the sky, leaving wing wisps as a signature.

Such is the realm of Christian longing for compelling fantasies.

According to the website Wowzone, three versions of the “Footprints” poem exist, including by Mary Stevenson (1936), Carolyn Carty (1963) and Margaret Fishback Powers (1964). See them here. Find illustrated versions of the poem here.

And many websites are devoted to the faux meme. Believers apparently can’t get enough of it. 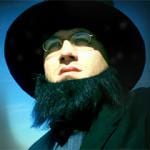 October 22, 2019
Why should parents be allowed to enforce religion on their children?
Next Post 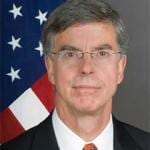 October 24, 2019 U.S. senators last hope to block short, fateful road to perdition
Recent Comments
0 | Leave a Comment
Browse Our Archives
get the latest from
Godzooks: The Faith in Facts Blog
Sign up for our newsletter
POPULAR AT PATHEOS Nonreligious
1

Were the Sacrifices Worth it?
No Longer Quivering
Books by This Author Books by Rick Snedeker