Was everything my parents taught me about character false?

In retrospect, Mom and Dad now seem to have been woefully mistaken.

They taught us kids that nothing was more consequential in life than your reputation, formed over long years by consistent demonstrations of honesty, kindness, reliability and the kind of integrity that makes your word your unbreakable bond and also your true reflection in the world.

Since Donald Trump was elected to the U.S. presidency, I’ve learned much to my dismay that there are a whole lot of people who don’t care a wit about any of those so-called “virtues,” casually trading them for power, influence or wealth.

And not just the president. Virtually all of his sycophants and bootlicks have done the same, apparently just for the fleeting chance to bask in the glow of celebrity and power, or to avoid losing access to either.

My daily-worsening view of human nature was assaulted this week, once again, as I watched lionized Republican senators trot out in front of news cameras to bald-facedly deny the compelling truth of what people with actual integrity are telling a congressional committee about by-now-irrefutable crimes against our nation this president has committed in the Ukraine.

Quid pro quo is no longer a hard-to-say-five-times Latin phrase that means nothing to most people. Now most of us know that it means “give something to get something,” and in the context of the Ukraine fiasco, it means the president tried to pressure that nation’s president into launching a bogus investigation into an invented charge of criminality involving former Vice President Joe Biden, whom he believes will be his most powerful 2020 presidential election opponent.

The pressure — tantamount to extortion — was the president’s withholding of several hundred million dollars in military defense aid already authorized by Congress until the demanded investigation was initiated and a public statement about it released.

In other words, the entire charade, using the full power of the presidency and the U.S. government was to benefit himself, personally — to increase the odds of his re-election in 2020. Not to benefit his country.

Keep in mind that Ukrainian officials and others in the American government had already looked into the situation — Biden’s son, Hunter, was a lavishly paid board member for a Ukrainian company when his father was VP — and found the arrangement to be legal. Trump’s claim that Biden the elder forced Ukraine to dismiss a federal corruption prosecutor to shield his son from legal charges is likewise fabricated.

In fact, Joe Biden, at the behest of President Barak Obama in tandem with a phalanx of U.S. international partners, including the International Monetary Fund, and following formal U.S. government policy (unlike President Trump now), tried to push out the Ukrainian prosecutor for refusing to prosecute any corruption in that country, not for threatening to prosecute his son.

So, what the current president has been doing to try and stack the deck in his favor in 2020 by hopefully derailing his top opponent’s candidacy is, at best, tawdry, unethical, selfish and wrong.

At worst it’s illegal, even treasonous, in that by limiting Ukraine’s ability to defend itself by withholding military funding in its current hot war with Russia — a U.S. adversary, note — President Trump arguably gave great “aid and comfort” to the “enemy.” Various geopolitical pundits have said that Russian leaders are both laughing at Trump and cheering to celebrate their nation’s good fortune to have a U.S. president as an ally in opposition to the desires of his own countrymen. The jury is still out on the president’s legal exposure.

And this wasn’t his only transgression against the republic’s honor and safety. He, also for political not national-security reasons, abruptly pulled U.S. troops out of Syria, endangering them and us, and callously threw our longtime Kurdish allies (who sacrificed 11,000 lives fighting ISIS for us) under the proverbial bus. Forget about his well-documented mysogeny and racism and disloyalty to aides.

To my way of thinking, a president who behaves this way, who sacrifices national security and honor to help himself win a political contest and bolster an enemy, is a man completely lacking the kind of essential character my parents extolled.

I am embarrassed for anyone who could be as astonishingly selfish as this man and still sleep at night. As I am embarrassed for the senators and evangelicals and random voters who actually believe such an awful human being is God-sent, which, as I’m an atheist, strikes me as more embarrassing still.

I keep waiting for the dormant consciences of our Republican U.S. senators to kick in as if they’ve just jolted awake from a nightmare full of gargoyles and finally see the light of truth and reality that shines for those of us who aren’t in thrall to this gaudy, soulless cult of personality.

But sadly, and I know my parents would be greatly demoralized by all this political evil going on if they were still with us, I am not holding my breath. 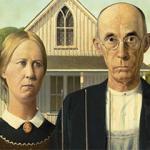 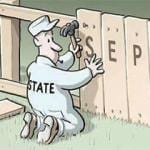 November 8, 2019 Evangelicals busy tearing-down wall of church-state divide
Recent Comments
0 | Leave a Comment
"One problem with all this is that because Barr’s base religio-political assumption, as doesn’t his ..."
Jim Jones Fortunately, lots of people think what ..."
"Homeopathy is just water. Homeopaths acknowledge this. They just think the water “remembers” what was ..."
Matt G What cures existential angst? Maybe beer, ..."
""The ninth of the 10 commandments — “You shall not give false testimony against your ..."
C_Alan_Nault Evangelicals try to sneak ‘Endowed by ..."
"Not everyone wants separation of church and state in school. Some want church embedded in ..."
John Malintone Evangelicals try to sneak ‘Endowed by ..."
Browse Our Archives
Follow Us!