I must say, if evangelical Christians continue to insist on thinking the breathtakingly hypocritical way they do, Donald Trump might actually get re-elected.

I shudder at the thought, but it’s hard to dismiss. And even some evangelicals — those few, those precious few — are painfully alarmed by the paranoia, moral duplicity and political gullibility they see rampant among their faithful brethren.

One of these warning Cassandras is Peter Wehner, a conservative Christian who served in the White House under three administrations. According to an online article in Salon in July, Wehner “remains baffled by the unwavering support for Trump by fellow evangelicals, and [fears] that their political hypocrisy would poison their religious movement.”

Wehner, in a July op-ed in The Atlantic, a liberal magazine, lamented the combative, personality cult that grips the evangelical community in its thrall at the moment, and what it portends.

“The enthusiastic, uncritical embrace of President Trump by white evangelicals is among the most mind-blowing development of the Trump era,” Wehner wrote. “How can a group that for decades — and especially during the Bill Clinton presidency — insisted that character counts and that personal integrity is an essential component of presidential leadership not only turn a blind eye to the ethical and moral transgressions of Donald Trump, but also constantly defend him?”

Wehner contends that many evangelicals believe they are engaged in “an existential struggled with ‘wicked’ American liberals,” reporter Travis Gettys wrote in Salon, “and they feel that trump is their strongest champion in that fight.”

“Many white evangelical Christians, then, are deeply fearful of what a Trump loss would mean for America, American culture, and American Christianity,” Wehner wrote in his Atlantic piece. “If a Democrat is elected president, they believe, it might all come crashing down around us. … Fort them, Trump is a man who will be ruthless against those they view as threats to all they know and love. For a growing number of evangelicals, Trump’s dehumanizing tactics and cruelty aren’t a bug; they are a feature. Trump ‘owns the libs,’ and they love it. He’ll bring a Glock [semi-automatic pistol] to a cultural knife fight, and they relish that.”

At heart it is about payback, or vengeance, to use a common biblical term; it’s about divine justice. Wehner notes that many of his brethren are “filled with grievances and resentments because they feel they have been mocked, scorned and dishonored by the elite culture over the years” — and that includes even elite, well-educated and professional evangelicals like Wehner.

What they want is for Trump to punish and subdue their tormenters, and they’re willing to betray the most fundamental articles of their faith to do it, Wehrner contends.

“There’s a very high cost to our politics for celebrating the Trump style, but what is most personally painful to me as a person of the Christian faith is the cost to the Christian witness,” Wehner wrote. “Nonchalantly jettisoning the ethic of Jesus in favor of a political leader who embraces the ethics of Thrasymachus and Neitzsche — might makes right, the strong should rule the weak, justice has no intrinsic worth, moral values are socially constructed and subjective — is troubling enough.

“But there is also the undeniable hypocrisy of people who once made moral character, and especially sexual fidelity, central to their political calculus and who are now embracing a man of boundless corruptions.”

He describes the duplicity as a “moral freak show.” Nonreligious Americans have long viewed it this way, but it’s reassuring to learn that the existential threat is not lost of all evangelicals.

Wehner also points out that he keeps hearing that Trump’s era “is spiritually driven,” by which evangelicals in thrall to the president say they mean “God has chosen him and is protecting him” to carry out the evangelical agenda.

Of great import to the coming election is that there are a lot of evangelicals who seem to share this belief.

Polling up to January of this year by Pew Research Center indicated that approval of President Trump among white evangelical Protestants is 25 percent higher than the national average, and that 70 percent of white evangelicals who then attended church at least once a week approved of Trump, versus 65 percent of those who attend religious services less often.

Recent polling indicates Trump’s support among his base, of which evangelicals comprise a major subgroup, has held steady.

So, whatever happens, the president will have an enormous group of voters in his pocket for the 2020 election unless something cataclysmic happens to his candidacy.

Let’s hope it does.

In the meantime, let’s hope Christians sooner rather than later return to being more ardent followers of Christ’s doctrines than Trump’s. 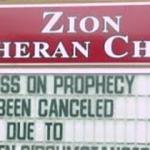 November 12, 2019
What’s one to think about an omniscient God who can’t foresee?
Next Post 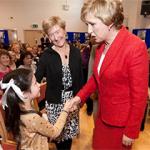