The old Doonesbury cartoon strip embedded in this post would be ridiculously funny if it weren’t so true. 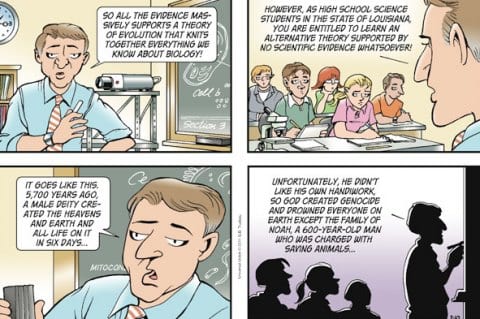 The strip pokes fun at Louisiana’s badly misnamed 2008 Science Education Act, which allowed — and still allows today — teaching in the state’s science classes material that is critical of such long-established scientific theories as evolution and global warming. Louisiana was the first state to pass such a wrongheaded law.

It’s fitting that a Republican governor — Bobby Jindal — signed the misnamed legislative measure into law, because Republicans by far outnumber Democrats in not believing in evolution. A 2015 MSNBC article noted that 49 percent of Republicans, virtually half, disbelieved that species, including man, evolve over time.

A 2013 Pew Research Center survey found that willful Republican ignorance on the topic had actually increased.

“Roughly two-thirds of Democrats (67%) and independents (65%) say that humans have evolved over time, compared with less than half of Republicans (43%),” Pew reported. “The size of the gap between partisan groups has grown since 2009. Republicans are less inclined today than they were in 2009 to say that humans have evolved over time (43% today vs. 54% in 2009), while opinion among both Democrats and independents has remained about the same.”

Virtually zero scientific evidence exists for so-called creationism, which holds that mankind and other species exist today in exactly the same form as when God supposedly created them some 6,000 years ago, according to Biblical texts. Just as no evidence exists — and much to the contrary — that dinosaurs existed simultaneously with humans, no matter that the mock-up of Noah’s storied ark in Kentucky includes dinosaurs in its hull.

A number of efforts emerged in recent years, up to 2015, to rescind, revise or replace Louisiana’s Science Education Act, or wise-up its citizens about real science vis-à-vis religious fantasy.

So, Gary Trudeau’s Doonesbury cartoon, sadly, is just as relevant today as it was then.

Bible-based creationism has been ruled a nonscientific religious argument by courts in other states, but for some reason not in Louisiana — at least I could not find any evidence online that it had.

Ignorance, it turns out, has legs. Even in America.

And we thought all this nonsense ended after the infamous 1925 Scopes “Monkey Trial” in Dayton, Tennessee. 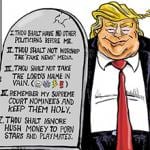 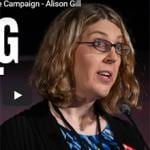 December 23, 2019 A Christian nationalist group by any other name is just as malodorous
Recent Comments
0 | Leave a Comment
Browse Our Archives
Follow Us!