I would absolutely become a true believer tomorrow … if

Consider for a moment the essential idea in this photo illustration:

“It would only take 1 piece of verifiable evidence to destroy atheism.” 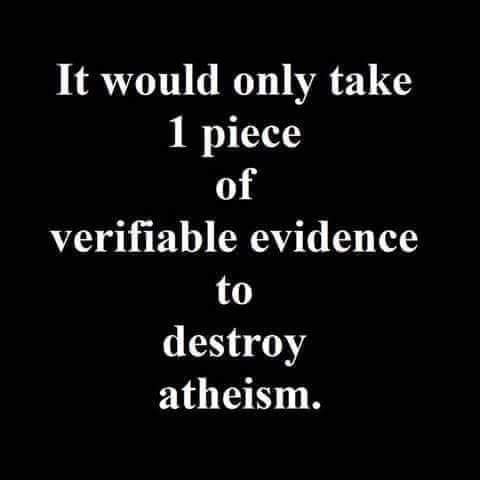 This is what distinguishes religious faith from religious doubt.

For example, science and common sense have provided veritable mountains of material evidence irrefutably contradicting many fundamental proclamations in the Bible, such as the age of the Earth, the genesis of humankind and how the solar system is structured and moves.

Which is to say, substantive fact has proven that the Earth is more than 4.5 billion years old (the bible says 6,000); our species, Homo sapiens, evolved from lower life forms over eons (the Bible says God originally created humans in the same form they exist today); and all the planets in our solar system, including Earth, orbit the Sun, and only moons orbit their parent planets (the Bible contends that Earth is the center of the universe around which everything else revolves).

And we’ve known these concrete truths for a long time now, centuries in some instances.

Yet … billions of Christians worldwide still believe in the inerrancy of the Bible, unmoved by such credible (arguably indisputable) empirical evidence to the contrary.

Reasonably speaking, the credibility of any book divined as the “Word of God” should be permanently destroyed if any part of it proves mistaken, not gospel, in other words.

But this has not fully happened because religious dogma, unlike facts, is based on inaccessible surreality, not reality, and believers trust sketchy and uncorroborated supernatural imaginings received from the ancients instead of material, testable, provable, empirical evidence obtained from the real world in the here and now.

As a nonbeliever in all things supernatural and superstitious, I subscribe to the sentiment in the photo illustration embedded here. If any — any — evidence were credibly produced that divinities exist in an invisible realm and control our lives beyond our capacity to investigate them, I would instantly transform into a true believer.

But such evidence has never been reliably, plausibly presented. So I remain unconvinced and live my life “by the stars,” as it were — by the banal realities of existence, not seductive fantasies.

It would be a far different world if faithful people would hold their beliefs to the same rigorous testing that atheists and even agnostics do.

If they did, most of us would likely be of the same mind regarding the gods: There aren’t any.

January 15, 2020
My state is a church-state-separation scofflaw, and proud of it
Next Post