That a Harvard law professor — Adrian Vermeule, specifically — would think atheists are too untrustworthy to hold public office should in itself be shocking.

For the moment keep this term in mind — extremist — because it’s accurate and telling.

Vermeule’s bias is striking because we tend to think of academics in elite American institutions of higher learning as extraordinarily thoughtful, knowledgeable and, above all, reasonable. At least I do.

However, note that Vermeule presumably came to his anti-atheist mindset knowing that zero research data, or even anecdotal evidence, exists demonstrating that atheists are somehow inherently unfit to hold any elected office, or to do anything anyone else can do, based on moxi, merit and motivation. It’s a myth that being atheist is disqualifying, an unsubstantiated imagining mostly espoused by Christians, as are that faith’s doctrines themselves.

But Vermuele still embraces this view, proclaiming in a recent Twitter tweet that it’s “sensible” that some states — eight currently do — keep laws on their books technically barring atheists from public office or serving on juries. He argues in the tweet that atheists “can’t be trusted to keep an oath.”

Does he mean like Senate Majority Leader Mitch McConnell, an evangelical Southern Christian, can’t be trusted to keep his required oath to be impartial in a Senate impeachment trial? Indeed, McConnell has explicitly declared that he will not be impartial in the impending trial of President Donald Trump for abuse of power and obstruction of Congress, and, in fact, publicly declared he his coordinating a joint defense strategy with the president — the defendant. 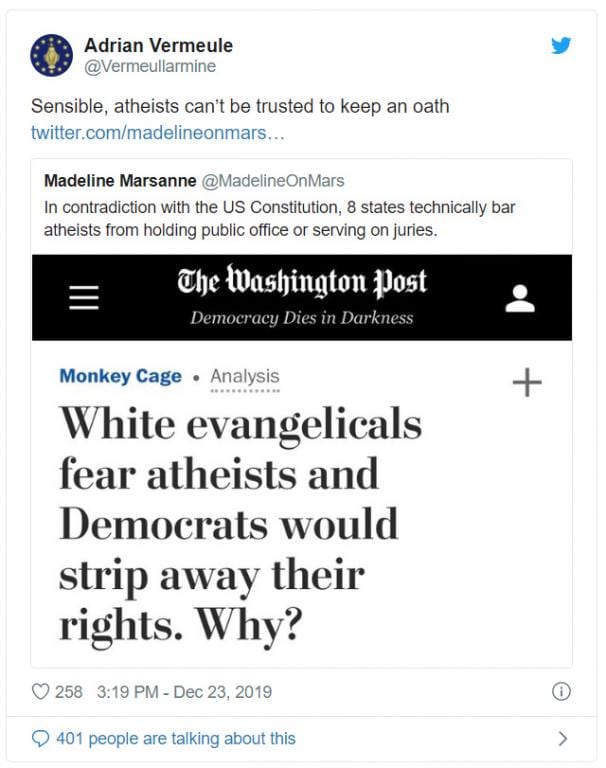 Give me atheist jurors instead, please, if that’s what the supposedly noble opposite looks like.

What makes Vermeule’s view on atheists exceptionally disturbing is that he’s not just some marginally impressive academic at a tiny flyover junior college with precious few credentials. No. He’s a heavyweight, the bearer of an elite Harvard law degree, past clerkships with U.S. Supreme Court Associate Justice Antonin Scalia (1994-1995) and Judge David Sentelle of the U.S. Court of Appeals for the District of Columbia Circuit. He was twice (2002 and 2004) feted with the Graduating Students Award for Teaching Excellence when he taught on the faculty of University of Chicago Law School.

So, he’s no slouch in his field, and in fact is a kind of lion. Aren’t top-tier intellectuals in academia supposed to place hard evidence over prejudice and intuition?

To repeat myself, there’s no evidence anywhere generally convicting atheists of bad faith, so to speak. Atheists, like myself, are historically as honorable and reliable as most Christians (those unlike Mitch McConnell), or, for that matter, any other appropriately moral Americans.

So, this all begs the question: Why does Adrian Vermeule so deeply mistrust atheists?

A compelling possible answer is that he is a converted Catholic religious extremist, even arguably a theocrat at heart (even though he would probably emphatically deny it), who views unbelief as a threat to our republic.

In a 2016 interview with the United Kingdom-based Catholic Herald, Vermeule suggested “there is no middle way between atheism and the Church.”

“Raised a Protestant, despite all my thrashing and twisting, I eventually couldn’t help but believe that the apostolic succession through Peter as the designated leader and primus inter pares is in some logical or theological sense prior to everything else — including even Scripture, whose formation was guided and completed by the apostles and their successors, themselves inspired by the Holy Spirit,” Vermeule told Herald interviewer Christina Dearduff.

Considering that the purported Holy Spirit of Christian faith is pure, unsubstantiated fantasy, at the very least we should be very wary when considering anything else Vermeule may espouse as fact, such as that atheists are dangerous.

In the Herald interview, Dearduff further reported on Vermeule’s belief that a “very great evil of schism and private judgment” exists in faith, that “there is no stable ground between Catholicism and atheist materialism,” and that “one must always be travelling, or slipping unintentionally in one direction or the other.”

In other words — and this is a frighteningly conservative idea — Vermeule believes that just dipping a toe in the roiling water of religious doubt will inevitably drag skeptics under into a hell of heresy.

Dearduff also reported that Vermeule told her (incongruously for a legal scholar, it would seem), that he “puts little stock or faith in the law,” believing legal transformation can only derive from “cultural improvement.”

“If that culture sours and curdles; so will the law; indeed that process is well underway and its tempo is accelerating. Our hope lies elsewhere,” Vermeule told Dearduff.

To give a sense of how fringe this scholar’s cultural thinking is, note the strange ideas he presents in the Catholic legal theory blog Mirror of Justice, in which he proposes a U.S. immigration policy that “gives lexical priority to confirmed Catholics.”

The end game here should terrify anyone who honors democratic, secular values.

“We must overcome the know-nothing bigotry of the past,” Vemeule writes. “… Catholics need to rethink the nation-state. We have come a long way, but we still have far to go — towards the eventual formation of the Empire of Our Lady of Guadalupe, and ultimately the world government required by natural law.”

What he is proposing is replacing President Trump’s racist immigration policy with a pro-Catholic one.

Note that “natural law” is a Catholic idea and can be interpreted as “Catholic law,” based on what Catholics regard as “natural” scripture-based morality. It would be a world where everyone went to Mass on Sunday and ate a thin wafer of bread that they actually believe is the body and blood of an ancient dead prophet.

And these guys think atheists are extreme.

January 19, 2020
Woman crashes into car to test whether God would save her. He did!
Next Post

January 22, 2020 Life is beautiful: WSJ editorial peddles fantasy to U.S. have-nots
Recent Comments
0 | Leave a Comment
"Of course religion is in NO WAY militant, right Barr? The crosses, Jesus signs and ..."
Matt G Spain, America growing more secular at ..."
"I rejected christianity because they dont practice the peace, love and tolerance they espouse. As ..."
Brianna LaPoint Christian evangelicals see public childcare plan ..."
"Yes, and Cathars were slaghtered in the Crusades. The Waldensians were a cool group that ..."
Rick Snedeker Spain, America growing more secular at ..."
"Yeah, what Lenin etc came up with wasn't a lot different from the society they ..."
al kimeea Christian evangelicals see public childcare plan ..."
Browse Our Archives
get the latest from
Godzooks: The Faith in Facts Blog
Sign up for our newsletter
POPULAR AT PATHEOS Nonreligious
1

India's nightmare ignited by religion, quackery...
The Freethinker
Books by This Author Books by Rick Snedeker