Although as an atheist I argue no actual gods probably exist in the universe, I’m pretty sure that cats wouldn’t agree. 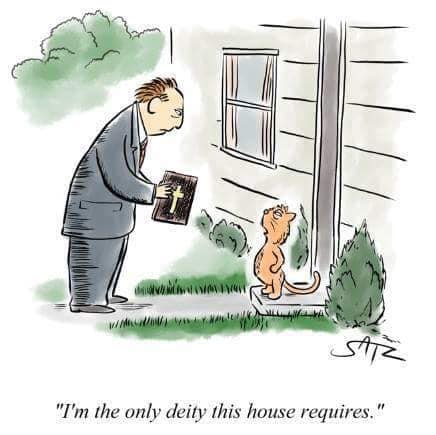 Anyone who has ever owned a cat knows that in their little self-absorbed brains, they are certain nothing in existence is superior to them. They live as if undeniably divine.

They don’t come obediently when you call (unless you have something they want, like food or catnip).

They don’t refrain from clawing your furniture because they are fearful of shredding it and angering you (in fact, that’s the goal).

They don’t give you the time of day because they only heed cat time, which is extremely random and unclocked.

They never clean their litter boxes.

So, when I saw the cartoon embedded in this post, I said to myself, “Amen.”

However, notwithstanding their nearly absolute disinterest in human needs, housecats inadvertently tend to meet many of them, especially of the emotional kind.

I once had a cat named Razi (after an ancient Muslim atheist philosopher) who liked to sit on my lap while I read in the evening. I knew full well he loved how warm a perch it was and couldn’t care less about whether I found the habit ingratiating. But, still, his purring presence and warmth against me, and the ritual familiarity of it, was deeply comforting.

In a sense, I guess you could say it was kind of divine.

January 27, 2020
Book: Religion is a ballast against totalitarianism. God forbid.
Next Post

January 28, 2020 Astrology is to astronomy what 'crop circles' are to Meteor Crater
Recent Comments
0 | Leave a Comment
"It's my understanding that a core element of the authoritarian brain is that a little ..."
Brian Curtis Let’s call U.S. religious freedom what ..."
"Yeah, I'm thinking broader than just nepotism. (For example, the undercover NSA spying thing got ..."
Griff Pryce How about a checks-and-balances tool for ..."
"Seven months ago I submitted a letter of personal experience and poem to Free Inquiry ..."
cgosling An apostate’s journey: From ‘Sunday Christian’ ..."
"Obama was clean in terms of familial corruption as far as I know. ie, as ..."
IconoclastTwo How about a checks-and-balances tool for ..."
Browse Our Archives
get the latest from
Godzooks: The Faith in Facts Blog
Sign up for our newsletter
POPULAR AT PATHEOS Nonreligious
1