My state is a church-state-separation scofflaw, and proud of it

Although in most respects it’s a supremely lovely place, the state where I live — South Dakota — is also a disappointing part of the problem regarding inadequate church-state separation across America.

And it’s a bigger part of the problem than I knew until reading the American Atheists (AA) organization’s recently released second State of the Secular States report.

South Dakota’s report card in the document was peppered with a lot of red-X demerits for its laws and regulations privileging religion, particularly Christianity, in the lives of the state’s citizens. Subtitled “A Review of State Law and Policy Affecting the Separation of Religion and Government,” the AA report cites 12 separate instances of “negative provisions in place” in the state’s legal codes and legislative policies.

The report, which which AA characterizes as “the most comprehensive analyisis of statewide laws and policies affecting religious freedom ever conducted,” ranks South Dakota as “one of the worst states” in the region for keeping faith and state apart.

“Religious equality is under attack in South Dakota. Loopholes and exemptions allow religiously motivated discrimination, particularly in reproductive healthcare,” Alison Gill, American Atheists’ Vice President for Legal and Policy, who authored the report, stated in a news release. “Should we be surprised that South Dakota schools let students skip class for outside religious instruction but do not provide comprehensive, scientifically accurate sex education?”

Demerits were issued to South Dakota for these legislative and regulatory provisions:

These particulars are not surprising, considering South Dakota is a very red state that enthusiastically voted for Donald Trump in 2016 and has a strong and long tradition of conservative, rural Christianity.

Indeed, current Gov. Kristy Noem, a daughter of a western South Dakota ranching family, is an unabashed evangelical who prayed at her inauguration and has routinely publicly prayed in the U.S. Capitol during National Prayer Week. She even issued a proclamation during flooding for citizens to pray for rain. Seriously.

So, yes, South Dakota is known for its faith. Which, if you’re a nonbeliever, is not a very good thing.

And my state is hardly alone in either giving limp lip service to or outright thumbing its nose at the strong church-state separation intended by the nation’s Founders.

The new thorough and thoughtful American Atheists report shows that in the states of the U.S.A., church-state separation is clearly a work in progress. In fact, in some places (e.g., South Dakota) it’s a work in retrogress, as new laws whittle away at such protections.

Twenty-one states in the union, 14 of them in the so-named “Deep South,” have religious exemptions in law books or public policy that “undermine equality,” according to the AA report. Three of these worst offenders are in the upper Midwest (including my state).

Ten states have strong religious equality protections, according to AA, with nine of them on either coast (plus Colorado, roughly in the center of the country).

Another 21 states have “basic separation of religion and government,” the report also notes.

In an introduction to the report, Gill laments the great lengths that zealous evangelicals have gone continuing to try and insert more Christianity into American public life, especially in schools.

“In 2019 we saw a heightened awareness about the importance of the separation of religion and government, due in part to the increasing efforts to undermine this bedrock protection for religious freedom,” Gill wrote. “At the federal level, the Trump Administration has stepped up its attempts to enshrine one particular religious viewpoint into the law by finalizing regulations promoting denial of health care by religious health care providers and by proposing rules which would prioritize religious beliefs over civil rights protections.

“At the same time, Christian nationalists have continued to push forward Project Blitz, a well-organized and well-funded campaign designed to undermine religious equality around the country by using legislation at the state level to promote a distorted vision of religious freedom. In 2019, state lawmakers introduced more than 80 Project Blitz-type bills to force religion into public schools, to attack LGBTQ equality, and to undermine access to reproductive services.”

“We cannot overstate the threat posed by Project Blitz and the effects of religious privilege on our laws. Far too many states jeopardize the health and well-being of their residents with religious exemptions, elevate religious dogma above the rights of women and LGBTQ people, and relegate atheists and religious minorities to second-class citizenship,” Fish wrote in the new report.

“However, the sheer number of states that do not adequately protect religious equality and the separation of religion from government present an opportunity for advocates. We have the chance to build lasting partnerships that will improve the lives of millions of Americans by passing laws that enhance equality and repealing those which threaten it.”

As Fish contends, it’s all about finding “human solutions to human problems” in our nation and the world, rather than gazing skyward into the void as religions do.

To work effectively toward that end, however, requires that no sectarian group may run roughshod over others. We’re all in it together, equally. 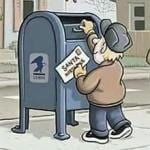 January 13, 2020
Don't laugh: Belief in Santa Claus not sillier than belief in God
Next Post

January 16, 2020 I would absolutely become a true believer tomorrow … if
Recent Comments
0 | Leave a Comment
Browse Our Archives
Follow Us!