Praying on epidemics, or anything else, won’t solve the real problem

This cartoon I found on The Atheist Agenda Facebook page may seem a little snide, and, well, it is.

But it’s also not unfair.

When Vice President Mike Pence was appointed this week by President Trump — “He’s got a certain talent for this,” the president said — to head-up the government’s global response to the coronavirus pandemic that seems to be relentlessly unrolling, eyebrows were raised so high as to touch hair. 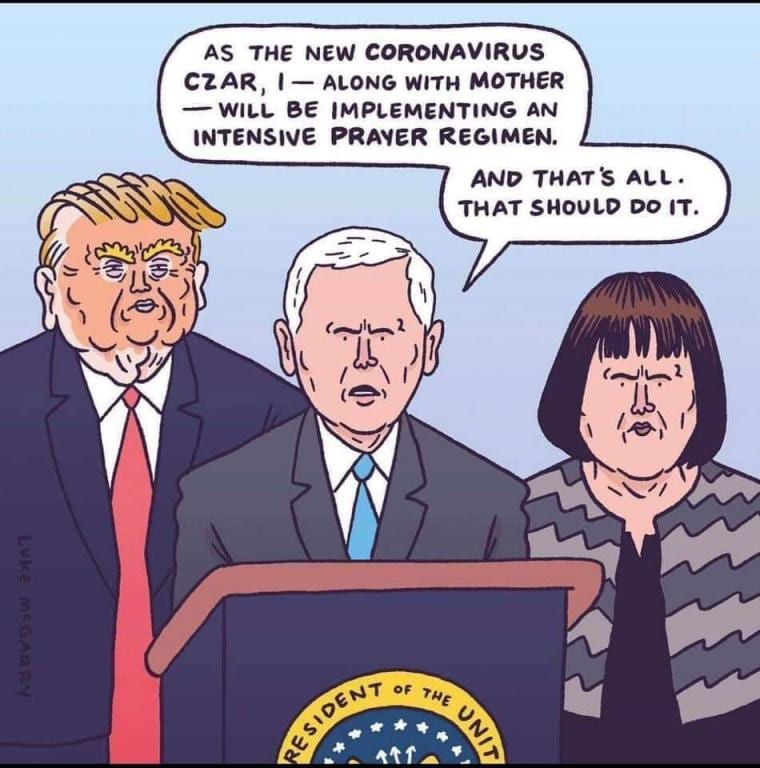 “Why is Mike Pence in charge?” ABC host Jimmy Kimmel asked incredulously, the Washington Post reported. “What is his plan to stop the virus? Abstinence?”

For example, in early 2015 it became clear in Indiana (Pence was governor at the time) that a sudden rash of H.I.V. (the AIDS virus) infections had erupted in a rural Scott County community adjacent to the Kentucky border.

Hoping to stem the crisis before it spread and became exponentially more dangerous, public health officials in Indiana and elsewhere fruitlessly urged Pence — for two long months — to authorize distribution of free hypodermic needles to the affected area to stop sharing of contaminated syringes, the New York Times reported. He resolutely refused because such needle sharing was then illegal in Indiana, an artifact of the governor’s war on drugs, and presumably because helping sinners sin further offended his conservative, evangelical Catholicism.

On the evening of March 23, about sixty days after the outbreak was first detected, when the governor left work for the day he told aides “he was going to go home and pray on it,” the Times reported. The next night the Scott County sheriff urged him to all distribution of free syringes to help halt the crisis. Two days after that, he issued an executive order allowing needle distributions in the county.

So, the reason people were surprised by the appointment of Pence to be the U.S.  coronavirus czar was because they remembered he prayed as H.I.V. infections suddenly raged in Indiana in 2016, rather than deciding by weighing facts with his own mind, not trolling for advice in the divine ether.

In the end, of course, Pence did the right thing for Indiana, deciding to accept expert scientific and public-health advice by apparently muting his moral and religious qualms. It was not only philosophically the right thing to do, but demonstrably.

After nearly 100,000 of sterile needles were handed out during the following months, and adding drug therapy and targeted outreach to the program, the surge in new H.I.V. cases started slowing down. In Scott County, 181 people had tested positive for the virus from November 2014 through the next year, but in September and October 2015 not one person tested positive, according to a 2016 study of the outbreak in The New England Journal of Medicine.

Afterward, reasonably, the Indian legislature passed legislation that Pence signed allowing such clean-needle exchanges during future H.I.V. or hepatitis C outbreaks. Congress in 2016 also lifted most of its ban on federal funding for such exchange programs, the Times reported.

This is how a secular government is supposed to work, through reason, not faith.

Although relieved by the governor’s change of heart, Indiana public-health officials had been gravely disappointed in Gov. Pence’s slow and intitially faith-based process of dealing with the crisis.

“He made it an uphill battle,” said Beth Meyerson, a health science professor at Indiana University and co-director of the school’s Rural Center for AIDS/STD Prevention.

For evidence-based scientists and public-health experts, it was a no-brainer from the start.

“The quickest way to stop H.I.V. spread through needles is to get rid of dirty needles,” said Dr. Jennifer Walhall, the state’s deputy health commissioner as Pence reflected on his conscience. “The only way to do that quickly and effectively is through an emergency needle exchange program.”

Studies reassuringly show that needle exchanges do not result in spikes in drug use by current users or higher recruitment of first-time experimenters, but they significantly cut the risk of infection by H.I.V. and other pathogens. However, for two months, the governor wouldn’t hear of it.

Part of the problem with needles is that addicts with lack of funds and poor self-discipline often tend to share.

“Three or four of us would be using the same needle,” said Melissa Sword, 30, who lives in a Scott County neighborhood of derelict homes. “Someone would pull a needle out of their arm, and I’d take it to the sink, wash it and use it.”

Ultimately, Pence “found the science convincing” as well as the practicalities of resolving the crisis, and rationally decided accordingly.

But researchers at Yale University in 2018 found that epidemic could have been prevented if Pence and state officials had acted quicker, the Washington Post reported this month.

Would that Pence had not wasted time consulting with God beforehand.

And that he won’t in protecting the country from the coronavirus.

U.S. House Majority Leader Nancy Pelosi put the issue in a nutshell at a news conference this week where she questioned the wisdom of selecting Pence to head-up the nation’s readiness to combat the coronavirus.

“This is about personnel,” she told reporters. “It’s also about respect for science, for evidence-based decision-making.”

Cartoon/Thanks to The Atheist Agenda 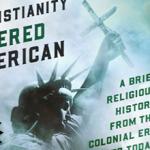