Catholics, it turns out, are the fraidy cats of American religious demographics.

This was one interesting finding of the Chapman Survey of American Fears, which was published recently on the Association of Religion Data Archives. The survey queried about a thousand people per year (2014 to 2018) about their fears — from marginal to terrifying — and has been releasing data from it periodically since.

“Catholics are more afraid in almost every scenario compared to Protestants or the religiously unaffiliated,” wrote Ryan P. Burge, Eastern Illinois University, in a report on the survey (‘Does Religion Impact What People Are Afraid Of?’). “I cannot find a single instance when Catholics are significantly less afraid of something than a ‘none’ [people unaffiliated with any religion]. And there are many instances where Catholics show a much higher level of fear than Protestants (Hell, Satan, Technology). For reasons I can’t fully explain, Catholics are a concerned bunch.”

(The chart below clearly shows how apprehensive Catholics generally are compared to Protestants and “nones.” 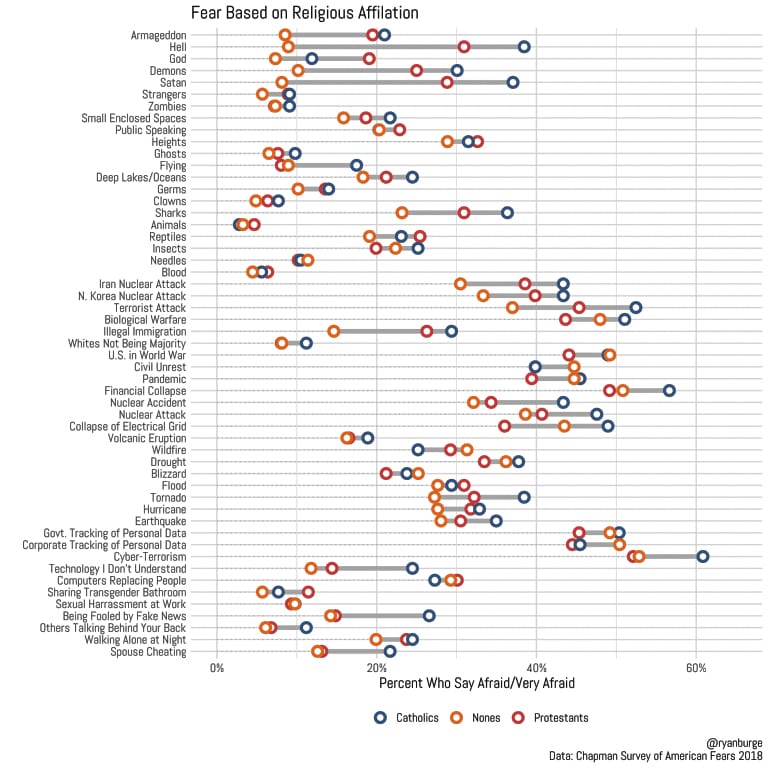 Whereas the study found that for some religiously devout Americans of any faith, their piety and regular churchgoing seem to have a significant calming effect on their fears, but for Catholics, Burge wrote, devotion “unequivocally” doesn’t appear to insulate them from fear at all.

“[The survey model] predicts that a Catholic who never attends Mass has a total of sixteen fears. That’s not statistically different from a Catholic who attends Mass more than once a week,” Burge explained. “However, the same is not true for Protestants. Among Protestants who never attend church, their total number of fears is no different than Catholics at just about sixteen. However, as a Protestant increases their frequency of worship attendance their total number of fears begins to decline.”

Data from the study, which queried people about 53 common fears, including the threat of nuclear war, hypodermic needles, flying, an impending economic collapse and of relevance now, pandemics.

“[The survey] also included a host of questions about religious belief, behavior and belonging that helps us understand how religion mitigates or exacerbates feelings of fear,” Burge explained.

In fact, the survey revealed, faith’s effect on fear kind of depends, as is often the case in life, on our individual psyches and on the unique factors involved in any apprehensive scenario.

One cause (or cure) of fearfulness doesn’t fit all.

“But, what [the data] has made clear to me is this: two people can see the same thing happen and one can be paralyzed with anxiety, while the other can shrug their shoulders and go about their day,” Burge pointed out. “And, the data cannot tell us what people do with that feeling of uncertainty – some my lick the floor, while others may hoard toilet paper.”

Still, the data is a fascinating trove of information about Americans’ fearfulness or relative lack of it and seems to imply some potentially important truths about people — truths that must wait for another study and another day to more fulsomely analyze.

Here are some summaries of select survey data that I found particularly interesting:

In general, the survey indicated that Americans are pretty reasonable and unflustered by most of the actualities of life, good and bad. Respondents’ answers to questions were generally rational and level-headed, although, as I noted before, the survey revealed Catholics to be a little knee-jerk jumpier than others.

For example, as expected among reasonable people, 86 percent of the respondents claimed they aren’t at all afraid of Zombies or other demons of the mind. Seventy-seven percent aren’t even slightly concerned about ghosts, and 64 percent have zero worry about any impending apocalypse or Armageddon event, as depicted in the Bible.

But, despite everything, most Americans continue to fervently believe an invisible divinity rules the universe and orchestrates their day-to-day lives.

Who says human beings are consistent?

March 27, 2020 New Zealand woman recounts growing up in hellish 'heavenly' cult
Recent Comments
0 | Leave a Comment
"Seven months ago I submitted a letter of personal experience and poem to Free Inquiry ..."
cgosling An apostate’s journey: From ‘Sunday Christian’ ..."
"Obama was clean in terms of familial corruption as far as I know. ie, as ..."
IconoclastTwo How about a checks-and-balances tool for ..."
"You're just depressing me further here, but it's necesssary — and motivating to continue pushing ..."
Rick Snedeker Trump cons U.S. voters with contemporary ..."
"QAnon is functionally, if not literally when they incorporate George Soros and the Rockefellers, the ..."
(((J_Enigma32))) Trump cons U.S. voters with contemporary ..."
Browse Our Archives
get the latest from
Godzooks: The Faith in Facts Blog
Sign up for our newsletter
POPULAR AT PATHEOS Nonreligious
1

Counterintuitive Puzzles that Should Be Easy
Our brains are surprisingly imperfect, and a certain category of puzzles illuminates...
view all Nonreligious blogs
What Are Your Thoughts?leave a comment
Copyright 2008-2020, Patheos. All rights reserved.