Most children know their ‘invisible friends’ are imaginary. Do you?

I love this cartoon because it perfectly encapsulates the hypocrisy of God-believers who view with fear, contempt or, if children are involved, bemusement at the superstitious imaginings of others. 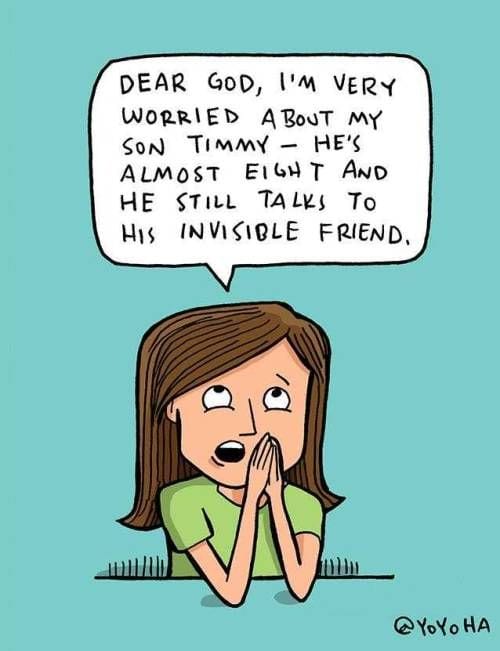 This one reminds me of another cartoon with the same theme, which depicts a Christian father watching with dismissive bemusement as his son slides into a postal drop-box his Christmas letter to Santa Claus addressed to the North Pole.

There is no difference between the two. God and Santa are both supernatural imaginings with no substantiation in reality, other than people’s groundless insistence that they exist.

Complicating this scenario is the fact that the “imaginary friends” that children so commonly embrace are absolutely normal and even healthy, according to childhood-behavior experts.

“Most young children play pretend games and interact with their stuffed animals, dolls, or other special toys as if they were alive,” wrote Eileen Kennedy-Moore, Ph.D., in a 2013 Psychology Today article. “According to Marjorie Taylor and her colleagues at the University of Oregon, by age seven, about 37 percent of children take imaginative play a step farther and create an invisible friend.”

Of crucial importance here, though, is that children — as fully engaged as they may be with their invisible pals — are by and large not deluded that they are real.

“Children vividly experience interactions with their invisible friends, but they almost always know that these friends aren’t real,” Kennedy-Moore wrote.

Unlike their Christian elders, who pray to invisible beings with nary a hint of awareness that they reside solely within their brains.

And while kids know they are playacting, the process seems to have positive practical results.

“It seems logical that children who invent invisible friends might be lonely or have social problems, but research doesn’t support those assumptions,” Kennedy-Moore points out. “In fact, compared to those who don’t create them, children with imaginary companions (either invisible friends or personified objects) tend to be less shy, engage in more laughing and smiling with peers, and do better at tasks involving imagining how someone else might think.”

So, it seems more like creating a character for, say, a school play, than “Method” actors who believe they have actually “become” the character they’re depicting. One is healthy, the other not.

It would appear that believing Christian adults who still appeal to divine forces for their salvation have chosen not to incorporate the Bible into their mature lives.

For example, there’s 1 Corinthians 13:11, the scriptural passage that admonishes adults to grow up (per the King James Bible version).

Most kids who have invisible friends apparently have already developed a mature understanding of fantasy.

Cartoon/Thanks to The Pink Heretic

April 1, 2020 U.S. Christians should thank Constantine, not Jesus, for their power
Recent Comments
0 | Leave a Comment
Browse Our Archives
Follow Us!