To this day, the legal codes of eight states retain antiquated statutes — however constitutionally unenforceable — specifically prohibiting atheists from holding any public office or trust, and two of them (Arkansas and Maryland) also ban nonbelievers from serving as witnesses in court.

Some people argue, “Who cares if such laws are still on the books if they can’t be enforced anyway?”

Well, for one thing, should Christian evangelicals really grab control of government, as they have been mightily trying to do for decades nationwide, just watch these laws getting yanked out of their legislative cobwebs.

For another, these legal artifacts are just ignorant in assuming that freedom of religion only means freedom of supernatural, godly religion, and not what it really means — religious belief of any flavor as well as nonbelief. So, discriminating against nonbelievers for their religious skepticism is as constitutionally problematic as discriminating against believers for their religious beliefs.

In his article in the April edition of Church & State, the Americans United for Separation of Church and State (AU) magazine, editor Rob Boston rationally debunks so-called “religious tests” for public office:

“Found at the end of Article VI, the provision does more than simply guarantee the right of everyone to hold federal office, regardless of what they believe or don’t believe about God – it also strongly debunks the Religious Right’s ‘Christian nation’ claims,” Boston writes. “After all, why would the Founding Fathers have guaranteed the right of Jews, Muslims, Buddhists, atheists and others to hold public office if they sought an officially Christian nation?”

Along that same line, a number of states also retain laws against “blasphemy,” whatever that is in a free-speech society that doesn’t constitutionally make an coddling exception for religious speech separate from any other kind. I’ve published posts about such national and international laws in the past here, here, here and here.

In general, when challenged, such religious-test and blasphemy laws have been struck down by courts in most countries as specious and unenforceable.

But, unenforceable or not, they pose at least a symbolic if not actual problem wherever they still remain in legal codes, waiting to arise like motley Phoenixes from their ashes of long irrelevance.

As the Constitution was being written and the seminal ideas of our democratic republic were being ironed out in consensus, the Founders and others were adamant about universal religious and irreligious freedom and blocking any potential avenues for religious dominance or oppression in American government. Boston quotes the Rev. John Leland, a colonial Baptist minister who wrote a 1790 essay titled “The Virginia Chronicle” in which he lambasted old laws in the colony that blocked certain kinds of Christians, much less atheists, from public office.

“If a man merits the confidence of his neighbors in Virginia,” Leland opined, “let him worship one God, twenty Gods or no God. Be he Jew, Turk, Pagan, or Infidel, he is eligible to any office in the state.”

This repeated what Thomas Jefferson, the primary author of the Declaration of Independence once wrote:

“The legitimate powers of government extend to such acts as are only injurious to others. But it does me no injury for my neighbor to say there are twenty gods, or no God. It neither picks my pocket nor breaks my leg.”

So, this assumption of even many Americans in the colonial era, that the United States is a “Christian nation,” is based on a bias — that believing in the Christian God is the ideal but, short of that, believing in at least some omnipotent divinity is a minimum requirement for American-ness.

Of course, that fundamentally and immediately left out a whole lot of people who were true Americans simply by living legally within its confines.

The language of their existing statutes has a hint of Old English to them. Here’s two to give you a flavor:

Such statues were successfully challenged in court starting in the late 1950s, Boston reports, up until the landmark U.S. Supreme Court case of Torcaso v. Watkins (1961), when justices reversed a lower-court decision to rule that laws requiring belief in God “unconstitutionally invades the appellant’s freedom of belief and religion and therefore cannot be enforced against him.”

Yet, still, there they remain in eight states’ lawbooks.

April 10, 2020
In death chambers, condemned killers deserve clerics of their faiths
Next Post 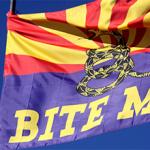