If anyone needs a reminder of supernatural religion’s power over the conservative human mind, note that the European intellectual awakening of the 17th and 18th centuries — the Enlightenment — centuries later, is still a work in progress.

The movement, characterized as siècle des Lumières in French (literally “century of the Enlightened”), “synthesized” radical new attitudes about God, reason, nature and humanity into a human- rather than God-centered worldview, the Encyclopaedia Britannica asserts.

“Central to Enlightenment thought were the use and celebration of reason, the power by which humans understand the universe and improve their own condition. The goals of rational humanity were considered to be knowledge, freedom, and happiness,” according to the encyclopedia’s online description of the movement.

Today, although more than two-thirds of the United States’ population claims belief in divine beings and an affiliation with Christianity, roughly a fourth of Americans are largely irreligious (many of them atheists) and are unaffiliated with any faith group — and the so-called “nones” (the religiously unaffiliated) are among the country’s fastest growing religion-related demographics. Western Europe is already much further along the path of jettisoning supernatural faith altogether.

It wasn’t always this way, and in historical terms, open religious doubt and faithlessness are a relatively new cultural phenomenon. In fact, although religious skeptics and atheists have always existed in human societies, after the eruption of impiety in ancient Greece and until the Enlightenment, divine religions for the vast majority of human beings on the planet were virtually the unquestioned be-all, end-all of existence. Nonbelievers and doubters — “heretics” in medieval parlance — were for centuries, even millennia, brutally persecuted and officially executed, often in depraved ways.

So the Enlightenment provided a shockingly welcome window of opportunity for pan-European doubters — which were legion, it turned out — to say what they really felt about the Christian faith that continued to fundamentally control not only their lives but their thoughts across the continent.

All you need to understand how suddenly unchained Enlightenment intellectuals felt is to read a few lines from American revolutionary gadfly Thomas Paine’s scorched-earth assault on institutional Christianity in his arguably atheistic screed Age of Reason (which, today, is a bargain on Amazon at 99 cents for the Kindle edition). Paine was completely unrestrained in his Christianity-bashing fervor.

In Part II, Chapter I (“The Old Testament”), Paine wrote:

“People in general do not know what wickedness there is in this pretended word of God. Brought up in habits of superstition, they take it for granted that the Bible is true, and that it is good; they permit themselves not to doubt of it, and they carry the ideas they form of the benevolence of the Almighty to the book which they have been taught to believe was written by his authority. Good heavens! it is quite another thing; it is a book of lies, wickedness, and blasphemy; for what can be greater blasphemy than to ascribe the wickedness of man to the orders of the Almighty?”

Actually, in my view, Paine’s fraught beliefs are part of a continuing 21st-century infatuation with religion, at least his quasi-Deist philosophy that viewed God as uncaring Nature writ large, not the deity of the Bible who care about and attended to everyone very, very personally. But, still, an invisible divine.

If you read Age of Reason, it is indistinguishable from atheism — a no-holds-barred, full-throated trashing of Christian theism and its foundational holy books, except that Paint incongruously also briefly purports to believe in God. Somewhat.

“Paine states almost immediately in the book that he believes in one God, as evident to him in the majesty of the physical universe. Paine advocated a simple ‘Deism,’ a non-dogmatic belief in a Creator God who deserves our private worship and expects us to be decent to one another,” wrote Humanism Plus blogger J.H. McKenna, Ph.D., a professor of history and religious studies at University of California at Irvin, in a 2017 post titled “Thomas Paine Was No ‘Filthy Little Atheist’”(referencing a Teddy Roosevelt quote).

So, Paine, like many religious skeptics and quasi believers then and now, just couldn’t bring himself, publicly or privately, to reject the existence of some kind of divine power. He could comfort himself in the ageless dodge that Nature is so astonishingly complex and majestic it is incomprehensible that it wasn’t created by some supreme power beyond objective human confirmation.

After reading Age, I challenge anyone to explain how anyone can still convincingly believe in God who, as Paine does in the book, intellectually demolish every single element of Christianity, sacred or otherwise. I’m sure he was not alone his day and age, and this assumption of divine actuality remains deeply embedded in the human family today, if still permanently unverifiable.

Considering that reason, the heart of the Enlightenment, objectively showed the intellectual unverifiability of supernatural claims, one would have thought the movement’s principles would have logically led to an even more secular future than the Enlightenment promoted at the time.

But, no. Most of the billions of global representatives of our Homo sapiens (“man the wise”) species are still in absolute thrall to unseen, unsubstantiated, unverified deities.

Yet, happily, pessimism doesn’t reign among modern secularists, who are still tilting at what have so far generally proven to be windmills.

“The Enlightenment is still winning” is the confident-sounding headline in a June 17 post in the Freedom from Religion Foundation’s blog on the Patheos hub. Author James A. Haught in the piece asserts that the Enlightenment “launched the long-running conflict still driving much of politics” in the West. He claims that the movement over centuries has won many battles against conservative, reactionary forces against its ideals, including succeeding, for example, in getting evolution taught in American schools.

However, evolution is only partially and often unenthusiastically taught in some American schools today, so the victory is only partial. Lots of Americans, a majority perhaps, still see evolution as a challenge to their belief in the inerrancy of the Bible, and continue to fight its insertion in school curricula tooth and nail (and by subterfuge), as they have for long decades since the “Scopes Monkey Trial” (if not before).

“On and on, through recurring cultural battles, progressive principles that began in the Enlightenment have prevailed,” Haught opines.

Perhaps, but history also teaches us that all of that can be lost in a heartbeat if a cataclysm such as war or plague descends on humankind, and people rush back to faith for comfort and hope, as Americans did after the Revolutionary War.

So, let’s not take a victory lap just yet, while keeping up the good fight.

June 27, 2020
While virus burns Americans, Trump fiddles with ‘the God’s truth’
Next Post 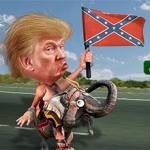 Hell in the 4th Century: Things...
Roll to Disbelieve
Books by This Author Books by Rick Snedeker

Nonreligious
The QAnon meme is a hoax, yet 15%...
Godzooks: The Faith in Facts Blog