If I were a Republican, I’d be a little stressed-out right now.

The winds of change against the GOP — religious and demographic — are blowing so hard they threaten to blow their entire political enterprise out of the water within a few short years. This article in The Atlantic magazine — “The Downfall of the Republican Party” — paints a dire picture.

But, curiously, most Republicans seem to little notice.

U.S. President Donald Trump, in all his chest-puffing, narcissistic, racist glory, is the Grand Poobah of this apparent Republican casualness about the seismic shifts under way in the electorate — shifts that promise to flow huge numbers of voters toward the Democratic Party.

And it has already started.

Symptomatic of this Republican remoteness and tone-deafness is Trump’s callous indifference to and even hostility toward the massive, mostly peaceful protests by Americans this month in response to the police killing of an unarmed black man in Minneapolis. His instinct: deploy the U.S. Army to shut it all down. He also decided to stage a photo op to hold up a Bible in front of a church, as if to prove that he is in charge because the God of Christianity in our supposedly “Christian nation” has anointed him to lead (which many in his “base” actually believe).

In a sense, of course Trump is unmoved by the visceral plight of Americans of color, especially blacks, after decades of police violence against them (and centuries of slavery) that they reasonably believe is unjust and unconstitutional. After all, people of color aren’t his or his party’s people, who are in fact mostly just elderly and non-college-educated white Christians, according to a  new survey report by the respected Pew Research Center. 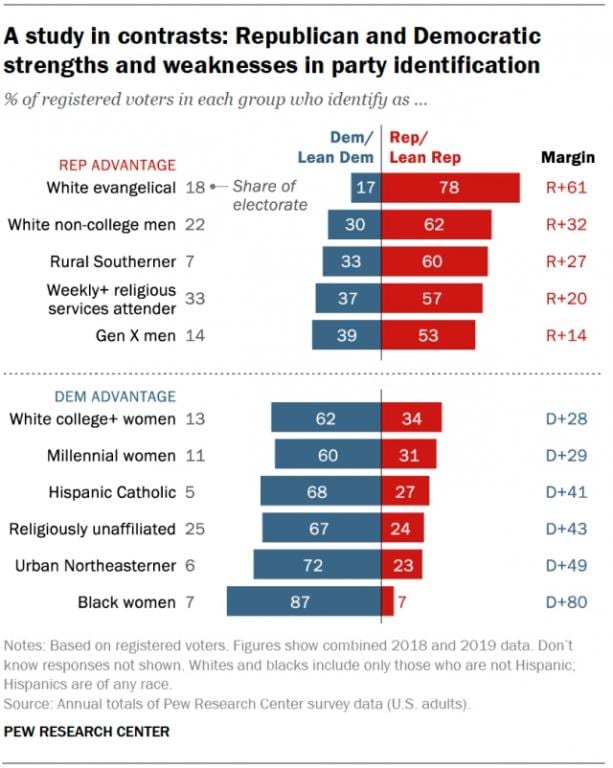 As far more conservative older Americans die off, they are leaving far more liberal and Democratic-leaning younger, better-educated Americans to vote, along with more and more and more non-white and irreligious voters who also lean leftward.

The GOP base is relentlessly shrinking, while future recruitment potential for Democrats is looking brighter by the minute.

Curiously, proportions of Democrats (33 percent today), Republicans (29 percent) and Independents (34 percent) have remained fairly constant in the U.S. population in recent years. What has profoundly changed is the internal demographic makeup of each group, according to a Pew analysis of surveys that queried 360,000 registered voters over the last 25 years up to 2019.

“The Republican and Democratic coalitions, which bore at least some demographic similarities in past decades, have strikingly different profiles today,” Pew asserts. “… The share of voters identifying as Republicans is now the same as it was in 2016, after having ticked down in 2017; Democratic identification is unchanged. Slightly fewer voters identify as independents than in 2017 (34% vs. 37%).”

Another concern for Republican, Pew notes, is white voters as the population over time is growing more racially diverse:

“[W]hite voters constitute a diminished share of the electorate – from 85% in 1996 to 69% in 2018/2019. And the growing racial and ethnic diversity of the overall electorate has resulted in a more substantial change in the composition of the Democratic Party than in the GOP: Four-in-ten Democratic registered voters are now nonwhite (black, Hispanic, Asian and other nonwhite racial groups), compared with 17% of the GOP.”

“Just as the nation has become more racially and ethnically diverse, it also has become better educated. Still, just 36% of registered voters have a four-year college degree or more education; a sizable majority (64%) have not completed college. Democrats increasingly dominate in party identification among white college graduates – and maintain wide and long-standing advantages among black, Hispanic and Asian American voters. Republicans increasingly dominate in party affiliation among white non-college voters, who continue to make up a majority (57%) of all GOP voters.”

Popular blogger Hemant Mehta (The Friendly Atheist) expressed concern in a post this week — “Democrats’ Religiosity Has Withered In Last 12 Years” — that Pew’s data could be viewed as concerning for Democrats. He worries the GOP will run ads criticizing Democrats’ estrangement from people of faith and that “the trend indicates greater ideological separation between left and right, and a probable rise in toxic partisanship.”

In fact, Americans of all political persuasions seem to be losing their religious faith. Even Republicans and GOP leaners experienced a spiritual sag, with their percentage of self-identified Christians slumping from 87 percent in 2008 to 79 percent in 2019, Pew reported. The percentage of white Christian Republicans dropped from 77 percent to 66 percent in the same period. White GOP evangelicals remain dominant in Republican circles at 78 percent.

For Democrats and leaners, Pew found, while 73 percent of Democrats identified as Christian in 2008, that figure plummeted to 52 percent last year. The sharp drop came from the subset of white Christians, who fell from 45 percent of the party’s voters in 2008 to 26 percent in 2019.

So, overall, I’d say that’s good news for secular Americans and the Democratic party and bad for Republicans, who are already reeling.

Even though religiously unaffiliated voters may be somewhat estranged from people of faith in politics and that this may complicate our politics, people of all political alliances seem to be gradually moving in the same direction regarding religion toward a more secular society.

Hopefully, we’ll all eventually coalesce somewhere near the middle. 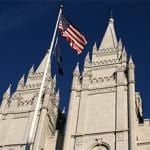 June 19, 2020
Factoids for the Faithless: Mormons to open temple in atheistic China
Next Post 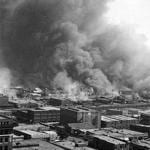 June 23, 2020 Sex, lies and video tweets. How fake history is spawned.
Recent Comments
0 | Leave a Comment
Browse Our Archives
get the latest from
Godzooks: The Faith in Facts Blog
Sign up for our newsletter
POPULAR AT PATHEOS Nonreligious
1