A concise, excellent article this month in the center-left news site RawStory (RS) provides more good answers to an important question that has tormented me for years: Why are so many Americans so quick to believe utter nonsense, be it political or religious?

It’s because, as humans seem to intuitively understand and psychological theory underscores, believing is way easier than not, Bobby Azarian writes in his August 3 RS piece, titled, “Neuroscientist explains why Christian evangelicals are wired to believe Donald Trump’s gaslighting lies.”

Once again, actualities reveal the willfully ignorant and dishonest nexus between Christian Right and conservative Republican thought. For a fuller sense of this, I recommend reading Chris Mooney’s fascinating book, The Republican Brain: The Science of Why They Deny Science—and Reality (2012), in which Mooney, according to his Amazon book blurb:

“… explores brain scans, polls, and psychology experiments to explain why conservatives today believe more wrong things; appear more likely than Democrats to oppose new ideas and less likely to change their beliefs in the face of new facts; and sometimes respond to compelling evidence by doubling down on their current beliefs.”

If you want to see a terrifying example of this kind of destructive invention, check out the video embedded in this post of Axios HBO reporter Jonathan Swan’s Monday interview with President Donald Trump.

In it, there is one bewildering, disturbing exchange in which Swan is trying to get the president to explain, as he had boasted earlier in the interview, how he and his administration were doing a “great job” containing covid-19 in the United States and protecting Americans when hospitalizations and deaths were spiking in many states and communities across the country. 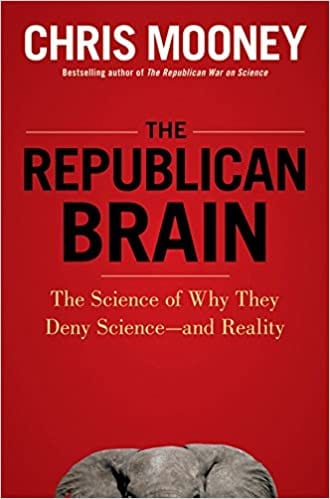 When the president insisted that U.S. deaths from the virus were among the lowest in the world and showed Swan a supposedly irrefutable chart provided by his staff, Swan said, “Oh, you’re doing death as a proportion of cases. I’m talking about death as a proportion of population. That’s where the U.S. is really bad. Much worse than South Korea, Germany, etc.”

“You can’t do that,” Trump testily exclaimed, indicating that Swan should only think of the situation in the way the president wanted.

The president spent the next few minutes repeating, “You can’t do that,” ever louder, as Swan tried to get him to answer the original question.

This would appear to be an instance underscoring Mooney’s contention that Republicans are extraordinarily resistant to new ideas, especially compelling ones that challenge an existing belief. To get a more robust sense of how the interview went down, read this Daily Kos article — “Confused Trump can’t understand how many Americans are dying of coronavirus in shocking interview” — which includes text of the unsettling, irrational (on the president’s part) exchange about deaths.

As Azarian points out in his RS piece, such behavior by the president is, unfortunately, unsurprising:

“Not only does Trump regularly exaggerate the truth, he frequently denies facts that can be observed directly from video or audio tapes. This has led some professionals to diagnose his lying as compulsive or pathological, and many psychologists have pointed out that he is constantly gaslighting his base—a term that refers to a strategic attempt to get others to question their direct experience of reality.”

And this denial of reality is crystal clear when listening to the bald-faced falsehoods and blatant misrepresentations uttered not only by GOP politicians who support the president but by regular Americans who buy Trump’s lies, as Azarian says, “hook, line and sinker.”

The president has inspired a tsunami of self-gaslighting by his minions, where truth is hard for everyone to discern amid the towering waves of nonsense they all subscribe to.

So, when Secretary of State Mike Pompeo says in an official speech that he awaits the Rapture, when Jesus will supposedly return to Earth after Armageddon, it the same made-up stuff as “We’re doing fine,” while a thousand Americans a day perish in the pandemic. Or when Attorney General Bill Barr arbitrarily insists that the U.S. is a “Judeo-Christian” nation and that only a theocracy can save us from the ravages of “militant secularism.”

There’s no evidence for any of it — that, somehow, with zero material supporting evidence, President Trump has heroically saved the nation from the worst that covid-19 might inflict, or that a “God in Heaven” is personally watching over us and requires abject obedience.

Although, as Azarian writes about Trump, “one must wonder how there are still people out there who believe anything the man says,” most of “his fervent supporters are convinced that Trump is the harbinger of truth when it comes to important issues like climate change—which is really just a ‘hoax perpetrated by the Chinese government.’”

Azarian referenced a landmark study published in the journal PLOS ONE in 2009, which considered how the human brain activates differently during a state of belief compared to a state of disbelief?

“What these findings show is that the mental process of believing is simply less work for the brain, and therefore often favored,” Azarian explained. “The default state of the human brain is to accept what we are told, because doubt takes effort. Belief, on the other hand, comes easily.”

It would appear, therefore, that conservatives — Republican and religious — are more tightly wedded to their beliefs than the rest of us. So the dangerous national charade continues amid a deadly outbreak of disease.

This reality reminds me that the only surefire way to make future America more rational and secular — and the Christian Right already knows this only too well — is to rigorously train our children. But it’s essential to train them to think more critically, not magically, as religious indoctrination does. Otherwise, youngsters grow up with God and other nonsensical fantasies deeply embedded in their brains. I focus on this topic in my 2018 book, Holy Smoke: How Christianity Smothered the American Dream.

What I’m saying is I believe — fairly, I think — that critical thinking is so important to the evolution our society that it should be taught every bit as rigorously as math and science to primary and secondary students rather than as an peripheral afterthought.

Otherwise we are almost certain to elect even more dangerous and deceitful charlatans to lead us in the future — and to believe they will somehow save us from ruin in this life and perdition in “the next.”

August 7, 2020 If you believe in God, you're ready to believe in this doomsday planet
Recent Comments
0 | Leave a Comment
Browse Our Archives
get the latest from
Godzooks: The Faith in Facts Blog
Sign up for our newsletter
POPULAR AT PATHEOS Nonreligious
1