Religion is to U.S. public education as flies are to ointment

Religion is to U.S. public education as flies are to ointment August 15, 2020 Rick Snedeker

This political cartoon illustrates that secular governance, the Founding Father’s dream, has a long, public and combative history in America — and that one pitched battleground has been the influence of religion in education.

I don’t know exactly how old the cartoon is, but it exhibits the artistic style in vogue at least as far back as the early 1800s, when the concept of public education first began to emerge in the new republic. It has been an incremental evolution.

“… 150 years ago in many places throughout the country, not even elementary education was provided publicly; in fact, even by the turn of the 20th century, some young people still did not have access to free public high schools,” the website Education News wrote in an article titled, “American Public Education: An Origin Story.”

Prototype American public schools were founded as early as the first several decades of the 17th century, but only boys attended, and the curricula barely went further than elementary schools of today. Only girls of rich families were educated, and precious few of those, while poor girls were out of luck. Even Benjamin Franklin’s own sister, Jane (they were known as “Bennie” and “Jennie” as kids) was only modestly literate, educated solely by her brother. She then honed her writing skills in years of correspondence with her famous brother, and proved to be an intelligent, perceptive and insightful communicator.

Noting that Ben liked to give his aristocratic French hosts cakes of soap handmade by Jane (he “felt that emphasizing his humble origins would trick his French counterparts into underestimating him”), such strategies were irrelevant to Jane.

“Jane Franklin never had to strategize to be underestimated. After all, she was an 18th-century woman. And, yet, she had a skill that set her apart: She could write,” Maureen Corrigan wrote in a 2013 NPR review of Jill Lapore’s Book of Ages: The Life and Opinions of Jane Franklin (I read it, and it’s fascinating). “Lepore says that though girls in Massachusetts at the time were routinely taught to read, only gentleman’s daughters could do more than scrawl their names, if that. It was big brother Ben who taught Jane to write and, thus, enabled their lifelong animated correspondence.”

By 1837, applying innovative educational concepts pioneered by Horace Mann, schools graded by age began to proliferate, and then standardization of public-school curricula and compulsory attendance.

Religious encroachment into American public education was inevitable, given the nation’s core founding value of religious freedom and the fact of a Christian majority in the population from the beginning to today.

“Religious freedom has always been a given in American life, but religious education has had a different road — a path rarely without controversy as it tries to find a place in a secular and worldly democracy,” according to a 2011 Reuters news agency article, “Religion, and controversy, always part of U.S. education.”

The controversy “over which religion is more ‘American’ — goes back to the beginnings of the country,” the article points out.

In the colonial period, all American schools were religious, generally affiliated with different denominations, such as Quakers and Puritans (Catholics were widely despised at the time by colonists, who were largely Protestant). Even tax-funded schools, as those in Massachusetts, had daily “devotional Bible readings.” Despite the religious diversity in the colonies, Protestants insisted that America was a Protestant country up to the mid-1800s, when this was challenged by the arrival of hordes of European Catholic and Jewish immigrants, who chafed at their children having to recite scripture from the King James Bible at school.

“Ironically, it was fear of Catholics, not court rulings on the separation of church and state, that did the most to secularize public schools,”according to Charles Haynes, senior scholar for the First Amendment Center in Washington, D.C., Reuters reported.

Meanwhile in the 21st century, conservative evangelical Protestants continue trying to embed more Christianity in America’s public schools, from Supreme Court-enabled after-school “Bible clubs” on school grounds, state legislative edicts requiring the posting of large signs saying “In God We Trust” on school walls, and court maneuvers to authorize official prayers at schools. (Read my past posts on the “In God We Trust” initiative, and the “The Good News Club” campaign.)

For a broader view of secularism’s struggle against unconstitutional religious encroachment throughout the American public square, including in education, read Susan Jacoby’s Freethinkers: A History of American Secularism. I am currently reading her latest (also thought-provoking) book, The Age of American Unreason, which recounts the history of how we arrived at this terrifyingly anti-intellectual, racist, reason-averse moment in America’s existence.

In her introduction to Freethinkers, Jacoby quotes Robert Ingersoll, “the foremost champion of freethought and the most famous orator in mid-19th century America,” speaking at the 1876 centennial of the signing of the Declaration of Independence. Ingersoll lauded the nation as the founder of “the first great secular government that was ever founded in this world.”

“We have retired the Gods from politics,” he said in the speech, somewhat prematurely as it turned out. “We have found that man is the only source of political power, and that the govern should govern.”

Now, our president stands in front of a church — after strong-arming and gassing protestors out of the way — to hold up a Bible as a political ploy to hopefully improve his election chances.

Kicking religion out of schools (as this embedded cartoon encourages), sadly, is not the only remaining battleground between church and state.

But public education, we should not forget, is also part of “governance.” Parochial schools are just a way to get around that, to deny children a fair chance to learn how to think critically, to rationally challenge all beliefs and assumptions, including their own.

August 13, 2020
Study: When Christian Right and nationalism embrace, it's dangerous
Next Post 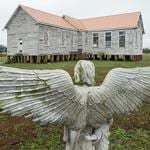 August 17, 2020 Judge rules spurned Catholic foster-care mother's case may proceed
Recent Comments
0 | Leave a Comment
Browse Our Archives
get the latest from
Godzooks: The Faith in Facts Blog
Sign up for our newsletter
POPULAR AT PATHEOS Nonreligious
1