Blogger Frederick Schmidt, an Episcopal priest, Ph.D.-holding director of a spiritual foundation, and the author of numerous treatises and books about spirituality, is clearly a smart, accomplished guy.

But this is precisely why his views on religious dogma are so problematic.

His recent post in the Patheos hub, titled “The Dogma Lives Loudly Within You,” erroneously conflates what people believe about supernatural realms with what they believe about natural ones.

In fact, the difference is enormous, as different as between a fleeting thought and a tornado. Between what is actual and what is merely imagined.

But to Schmidt, who in his post railed against Democrats railing against President Trump’s new U.S. Supreme Court nominee Amy Coney Barrett, religious dogma and political ideology are cut from the same cloth and should therefore be viewed and treated equally.

“[E]veryone has a dogma that lives loudly within them.  We may not admit it.  We might not call it a dogma.  We might even evince an endlessly open, even diffident attitude toward that small set of things that governs our conduct in the world.  But the fact of the matter is that no one other than a college freshman can thrive for very long without making commitments,” Schmidt writes.

But this isn’t about imaginary faith “commitments,” which is to say religious dogma. It’s about truth only found in the real world. Facts vs. fantasy, in other words. Not the same at all.

The title of Schmidt’s piece is a direct quote from Sen. Diane Feinstein (D-California), a snippet from what she said to Barrett in 2017 at a hearing regarding her nomination by the president to the federal Seventh District Court of Appeals. Sen. Feinstein was reasonably concerned that Barrett’s past legal writings and public statements indicated she might under certain circumstances give primacy to her faith over the law.

“[Barrett’s deep and abiding Catholicism is] of concern when you come to big issues that large numbers of people have fought for for years in this country.” Feinstein told Barrett at the 2017 Senate hearing. “You are controversial. Let’s start with that. You’re controversial because many of us who have lived our lives as women really recognize the value of finally being able to control our reproductive systems, and Roe entered into that, obviously. … You have a long history of believing that your religious beliefs should prevail.”

Although no “religious tests” are allowed for candidates seeking public office, I believe that prohibition originally referred effectively to what religion a candidate ascribes to, which precluded particular faiths from being blocked or others gaining hegemony. But it’s a far different question as to whether a judicial candidate’s religious faith (whatever it may be) is so intense or dominant in their thinking that it might preclude established law in their decisions on the bench.

That was Feinstein’s apprehension. She certainly didn’t care that Barrett was Catholic, but that she might be so over-zealous in her faith that it could inappropriately impact her performance.

After all, the tax-supported public square, including government and the law, which includes judges throughout the system, was originally created to be secular, faith-blind, as it were, focused only on the realities at hand, not the supernaturalities (I made up that word).

These questions are relevant today as evangelicals within the Trump administration — think Secretary of State Mike Pompeo, Secretary of Education Betsy DeVos and Vice President Mike Pence, et al. — continually try to insert their Christian faith ever deeper into government and the broader public body politic.

Although in responding to Sen. Feinstein and to other interrogations of her faith in the past, Barrett has stressed that she would faithfully follow the law, her language has been unsatisfyingly side-steppy, implying some possible loopholes and escape hatches.

“No matter how exciting any career is, what is it really worth if you don’t make it part of a bigger life project to know, love and serve the God who made you?” Barrett once rhetorically asked in a speech to college graduates.

In another graduation speech, at Notre Dame, her alma mater, Barrett expanded on this theme, as I reported in my Sept. 22 post (“Is Trump darling Amy Barrett a Trojan Horse for judicial Catholicism?”):

“A legal career is but a means to an end … and that end is building the Kingdom of God … If you can keep in mind that your fundamental purpose in life is not to be a lawyer, but to know, love and serve God, you truly will be a different kind of lawyer,” she said.

However, in a secular system, isn’t the end in America supposed to be building a more perfect earthly union, not a divine kingdom?

As a devout Catholic, Barrett is unsurprisingly staunchly pro-life and anti-abortion, but her reasoning opens the door to judges, for moral reasons, choosing to recuse themselves — decline to make a decision — where God and down-to-earth reality conflict.

“By creating through judicial fiat a framework of abortion on demand in a political environment that was already liberalizing abortion regulations state-by-state, she said, the court’s concurrent rulings in Roe and Doe v. Bolton ‘ignited a national controversy.’ Barrett noted that scholars from both sides of the debate have criticized Roe for unnecessarily creating the political backlash known colloquially as ‘Roe Rage.’”

However, the magazine noted, Barrett thought it was “very unlikely” the court would ever overturn Roe and that she envisioned “the political battle shifting toward matters of public and private funding.”

This is worrisome. One of the key ways the Christian Right (including fundamentalist Catholics) has successfully blunted the availability of Supreme Court-authorized legal abortions is to restrict federal and state funding for abortions.

By restricting funding for legal procedures, the faithful are indirectly but forcefully saying that its OK to have religious views trump public policy.

Barrett has consistently emphasized that her faith does not affect her legal work, but the primacy of her beliefs is still a worry. The “dogma,” indeed does appear to “speak loudly” within her. And the problem is whether that religious dogma — not her views on the law, which are evidence-based and thus not “dogma” — will in practice speak loudest in her mind.

As a judge in a secular republic, they shouldn’t because dogma is not fact. It is faith based on imaginings.

So when The Reverend Dr. Frederick Schmidt insists that belief in substantive reality and faith in chimera are one and the same, he is mistaken.

They are as different as right and wrong.

So it’s completely appropriate to try and tease out whether dogma or material evidence will speak loudest to her when Mrs. Barrett is inevitably seated on the U.S. Supreme Court. 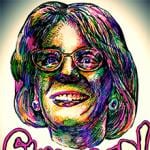 October 2, 2020 Church-state watchdog group decries faith ‘assault’ on education
Recent Comments
0 | Leave a Comment
Browse Our Archives
get the latest from
Godzooks: The Faith in Facts Blog
Sign up for our newsletter
POPULAR AT PATHEOS Nonreligious
1

Nonreligious
Why do honor-killers’ families applaud their murder of...
Godzooks: The Faith in Facts Blog
TRENDING AT PATHEOS Nonreligious