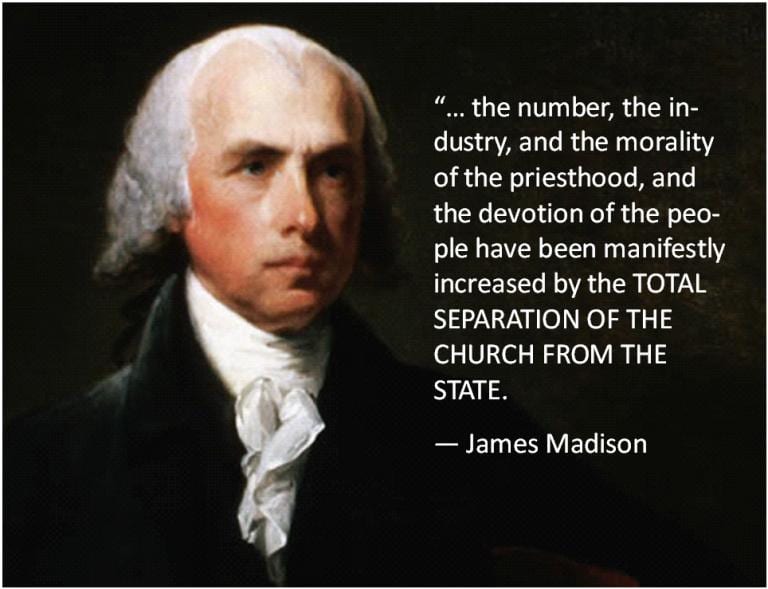 March 16 will be the 270th anniversary of James Madison’s birth, in 1751, which proved enormously consequential to future American freedoms of and from religion.

“Unfortunately, in most of the country his birthday will pass without even a nod of recognition toward the man who played a crucial role in the formation of the nation and one of its central governing tenets, the separation of church and state,” Rob Boston wrote nearly two decades ago in Church & State, the magazine of the activist secular group Americans United for Separation of Church and State (AU).

Madison was one of a handful of essential architects in the United States’ unique political experiment in republican democracy during the colonial era. He was the author of the Constitution’s seminal Bill of Rights and, along with Alexander Hamilton, James Madison and John Jay, co-authored the Federalist Papers (Madison wrote 29 of the 85 papers). He was later was elected fourth American president (1809-1817), succeeding Thomas Jefferson.

But, most importantly in relation to this nonreligious blog, the 5’4″ Madison was a pioneering, tireless and ultimately successful proponent of young America’s groundbreaking ethos of church-state separation, which remains effective to this day — if under unending assault from conservative evangelicals ever seeking a Christian theocracy to lord over the entire populace.

As prominent wannabe theocrats, like former U.S. Attorney General Bill Barr, without pause falsely herald the U.S. as a “Christian nation” originally created with “Judeo-Christian” values and power structures, it is important to set the historical record straight.

In fact, the American system of governance was created by Enlightenment-inspired men like Madison, who with laser focus sought to form a society where overt religious influence was specifically prohibited in governance, as this embedded Madison quote attests, from Separation of Church and State: Guarantor of Religious Freedom (1750), by Robert L. Maddox:

“[T]he number, the industry, and the morality of the priesthood, and the devotion of the people have been manifestly increased by the TOTAL SEPARATION OF THE CHURCH FROM THE STATE. … We are teaching the world the great truth that Governments do better without Kings & Nobles than with them. The merit will be doubled by the other lesson that Religion Flourishes in greater purity, without than with the aid of Government.” [capitalization Madison’s]

He arguably viewed the necessity of secular governance with far more primacy than, say, encouraging personal prosperity or even accommodating the “pursuit of happiness,” a novel social-political idea in his day.

But his view of religion in general was stark, as this oft-cited Madison quote below reveals:

“Religious bondage shackles and debilitates the mind and unfits it for every noble enterprise. … During almost fifteen centuries has the legal establishment of Christianity been on trial. What have been its fruits? More or less, in all places, pride and indolence in the clergy; ignorance and servility in laity; in both, superstition, bigotry, and persecution.”

That religion-wary Madison was a principal architect and author of America’s original political ideals powerfully belies the Christian Right insistence that the new nation was forged as a vehicle for God’s glory in Jesus Christ’s name.

To paraphrase 40th U.S. President Ronald Reagan (in office 1981-1989), Madison saw religion not as the solution but the problem in enabling effective, equal and stable governance.

However, it was a heavy lift to embed in the Constitution, because in Madison’s day, for example, religious freedom to many Americans meant in informal practice the freedom for citizens in a particular colony or area to mandate one official religion in their environs, while legally excluding all others. This was the practice in Madison’s own state, Virginia — Thomas Jefferson was also a Virginian and political secularist — which before the Constitution was enacted embraced the Church of England as its official faith.

What this meant was Virginia’s official church could tax state citizens for maintenance of the church and its programs — even if they subscribed to different faiths or none.

This coercive disconnect is what stuck in Madison’s and Jefferson’s craws.

As a young man, Madison was enraged to learn early in 1774 that several Baptist preachers had been jailed in a nearby county for preaching a non-official religion. He wrote this to a friend in Philadelphia, according to Boston’s 2001 Church & State piece:

“That diabolical Hell-conceived principle of persecution rages among some and to their eternal Infamy the Clergy can furnish their quota of Imps for such business. This vexes me the most of any thing whatever. There are at this time in the adjacent County not less than 5 or 6 well-meaning men in close Gaol [jail] for publishing their religious Sentiments which in the main are very orthodox. I have neither the patience to hear talk or think any thing relative to this matter, for I have squabbled and scolded abused and ridiculed so long about it, to so little purpose that I am without common patience. So I leave you to pity me and pray for Liberty of Conscience to revive among us.”

This incident proved a bellwether in Madison’s lifelong quest to keep faith out of American governance. Boston wrote that church-state scholar Robert Alley viewed it as a “pivotal” moment for the young radical.

“It is the general opinion, I think, of the scholars who have written about Madison that that was a key point in Madison’s life,” Alley wrote. “The thing that drove him to get involved in politics was seeing those men in jail in Culpeper County.”

History shows that the perpetuating power of supernatural religion, once embedded in societies, can be relentless over centuries. Even in the 21st century, Americans remain embattled by evangelical Christians who want to inundate U.S. governance and public life with the rules and symbols of doctrinal Christianity, such as biblical Ten Commandments displays in public venues. Happily, most but not all of these attempts have been ruled unconstitutional and illegal in the courts.

Madison clearly saw this problem as one among many of religious contamination of government.

Ultimately, in 1787, Madison and others were able to insert freedom of religion and from government interference inserted into the U.S. Constitution’s Bill of Rights, but it only applied to the federal government. However, 81 years later, in 1868, with passage of the Constitution’s Fourteenth Amendment, the Bill of Rights’ “establishment clause” mandating religious freedom was extended to state governments as well.

As the Christian Right continues chipping away at religious freedom as a means of privileging Christianity in America amid a faux notion that we are a “Christian nation,” it’s clear Madison’s vision is still not fully a fait accompli.

February 26, 2021 Top GOP pols from South Dakota still ducking reality to pacify Trump
Recent Comments
0 | Leave a Comment
Browse Our Archives
get the latest from
Godzooks: The Faith in Facts Blog
Sign up for our newsletter
POPULAR AT PATHEOS Nonreligious
1