As Americans flee faith, they embrace astrology and other nonsense

As Americans flee faith, they embrace astrology and other nonsense March 29, 2021 Rick Snedeker

I love it when false prophets have to fess up.

Not that acknowledging failure necessarily changes their schtick, their faux modus operandi, which is, as for all so-called “prophets,” to invent “predictions” about what will happen in the future and peddle them to gullible acolytes as reality-tested, trustworthy and reliable.

“This track record created a loyal audience of hundreds of thousands of people who follow him on social media and hang on his predictions about such topics as the coronavirus pandemic, the makeup of the Supreme Court, and the possibility of spiritual revival in America,” the New York Times wrote in a February 11 article this year. “And they took comfort ahead of the presidential election last fall when Mr. Johnson shared a prophetic dream of Mr. Trump stumbling while running the Boston Marathon, until two frail older women emerged from the crowd to help him over the finish line.”

In retrospect, it was a nightmare

When Joe Biden was certified as the 2020 election victor (despite Trump’s and his minions’ melodramatic whinings to the contrary), Johnson was forced “to admit he had let his followers down.” To admit he was simply wrong. I understand that also wishing he had admitted it was always just speculative bunk anyway was probably a bridge too far for this professional “soothsayer.” So we take what we can get.

“I was wrong, I am deeply sorry, and I ask for your forgiveness,” he wrote in an online letter he posted, The Times reported. “I would like to repent for inaccurately prophesying that Donald Trump would win a second term as the President of the United States.”

Not that his followers and other evangelicals were having any of it. They immediately lit into the unprophetic prophet, particularly on Facebook, where he sustained “multiple death threats and thousands upon thousands of emails from Christians saying the nastiest and most vulgar things I have ever heard toward my family and ministry” and also accusations that he was “a coward, sellout, and traitor to the Holy Spirit,” according to The Times. He also reportedly lost donor funding. Ouch!

Yet, despite Johnson’s painful comeuppance, subsequent public mea culpa and his new YouTube series titled “I Was Wrong” (in which he plans to investigate how the “prophetic movement has gone awry”), he didn’t really change his stripes. In the series, The Times reports, he will do a post mortem on how he messed-up in 2020 and cover such other topics as “what God is showing him about what comes next.”

Not exactly a transformation, which, of course, many of us nonbelievers could probably have prophesied ourselves — and been proven right.

After all, there’s money to be made.

Although the decline of Christianity (by far the dominant U.S. faith) is “continuing at a rapid pace,” according to a 2019 Pew Research Center, plummeting 12 points in the past decade from 65 percent of American adults, the national infatuation with not only freelance prophets but also such old-but-new-again practices as astrology and psychic phenomena has surged.

The good news is that Americans who are self-described atheists, agnostics or “nothing in particular” jumped from 17 percent of the populace in 2009 to 26 percent in 2019 — and is presumably higher today considering demographic trend lines over decades.

Most prominent in it are the so-called “prophets,” who “proliferated across the country” and gained stature during Trump’s presidency, The Times noted:

“They are stars within what is now one of the fastest-growing corners of Christianity: a loose but fervent movement led by hundreds of people who believe they can channel supernatural powers — and have special spiritual insights into world events. Many are independent evangelists who do not lead churches or other institutions. They operate primarily online and through appearances at conferences or as guest speakers in churches, making money through book sales, donations and speaking fees. And they are part of the rising appeal of conspiracy theories in Christian settings, echoed by the popularity of QAnon among many evangelicals and a resistance to mainstream sources of information.”

They operate mostly out of sight of non-Christian society in ideological bubbles and echo chambers, where each member reinforces the other, and the “prophets” reinforce everyone’s worst tendencies most of all.

Then there is budding, renewed interest in bogus old New Age distractions, such as astrology and psychics.

In 2017, Pew reported that nearly a third of Americans then believed in the authenticity of astrology ideology. Scholar Nicholas Campion, the author of Astrology and Popular Religion in the Modern West (2016) — it’s available in hard cover for the astonishing price of $179.67 — notes that, “New spirituality is the new norm,” according to a New Yorker article late last year.

If you’re unsure what “astrology” actually represents, this terse definition by historian Benson Bobrick in The Fated Sky (2008) gives a good sense:

Much of astrology’s re-emergence in recent years has been fueled by the internet, which, as for everything, accommodates instant messaging with enormous global reach, especially via social media. In 2018, the New York Times published a piece titled “How Astrology Took Over the Internet.” In October last year, The New Yorker published an article titled “Astrology in the Age of Uncertainty.”

Cosmopolitan Editor-In-Chief Jessica Pels, found in a survey that 74 percent of “Cosmo” reads are “obsessed” with astrology, and 72 percent check their horoscopes daily. So she has expanded the magazine’s print-edition astrology coverage to nine pages, The New Yorker reported.

“In its penetration into our shared lexicon, astrology is a little like psychoanalysis once was,” asserted the article’s author, Christine Smallwood. “At mid-century, you might have heard talk of id, ego, or superego at a party; now it’s common to hear someone explain herself by way of sun, moon, and rising signs. It’s not just that you hear it. It’s who’s saying it: people who aren’t kooks or climate-change deniers, who see no contradiction between using astrology and believing in science.”

It’s trending young. Smallwood says in the past year membership has “doubled” in the national Association for Young Astrologers. She adds that waxing popularity of astrology often reflects “the result of the decline of organized religion and the rise of economic precariousness, and as one aspect of a larger turn to New Age modalities.” Such a perfect storm of convergences now exists in American society.

The popularity of psychics also tends to inversely track the fading of traditional religious belief in societies, the website Review Werks points out, and these dubious paranormal assumptions are encouraged by echo chambers in social media as well as mainstream media, such as a 2020 Reader’s Digest article title “20 Mysteries Actually Solved by Psychics.”

Psychics have glommed on to the wellness craze, and the New York Times described them as the new body and mind “wellness coaches,” often as “an alternative to therapists.’ It’s big business, generating revenues exceeding $2 billion a year that are expected to reach $2.4 billion in a few years. The market for “psychic services” has soared 50 percent since 2005, Review Werks reports.

We can assume the market for Christian and freelance prophets is even huger.

The downside to all this surging interest in fringe religious prophets, horoscopes and psychics is that millions upon millions of people believe this stuff is true.

What good is losing religious faith if we just gain more fascination with paranormal flim-flam? 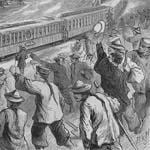 April 1, 2021 $1,018-a-pop ‘Satan Shoes’ bedevil evangelical Gov. Kristi Noem
Recent Comments
0 | Leave a Comment
"Fair enough, Gwen. The real culprit is emotional frenzy coupled with enormous, jam-packed crowds. But ..."
Rick Snedeker A religious stampede is a deadly ..."
"I'm not convinced that this episode constituted a 'religious stampede' just because the get-together happened ..."
Gwen Pryce A religious stampede is a deadly ..."
"So a Spell Checker would correct Lenin to Linen? This is an Excuse to Maintain ..."
skwills If abortion is so evil, why ..."
"If You need to Tell Me how Ridiculous I am, then All You're Really saying ..."
skwills If abortion is so evil, why ..."
Browse Our Archives
get the latest from
Godzooks: The Faith in Facts Blog
Sign up for our newsletter
POPULAR AT PATHEOS Nonreligious
1

Nonreligious
Is atheist icon Richard Dawkins saying what you...
Godzooks: The Faith in Facts Blog

Nonreligious
Why are penises so teensy-weensy in ancient religious...
Godzooks: The Faith in Facts Blog
TRENDING AT PATHEOS Nonreligious