Neither apparently had Kristi Noem, the governor of my very Christian state, South Dakota.

But now both Gov. Noem and I surely have — along with probably half the country or more — due to a seemingly illegal and unethical (if brilliant) advertising gambit repurposing Nike’s popular Air Max 97s into tongue-in-cheek, Satanic-themed sport shoes. They’re “decorated with a pentagram pendant, pentagram designs on the heel and an inverted cross on the tongue pull-tab,” not to mention “one drop of human blood” incorporated into the sole. Oh, and, uh, they’re also emblazoned with a rip-off of Nike’s “swoosh” logo, which is part of the apparently illegal part of the campaign.

The sneakers also are inscribed with the biblical reference “Luke 10:18”, a passage that states, “I saw Satan fall like lightning from heaven.” A sprinter’s shoe, obviously.

This is telling, because the promotion campaign for the now named “Satanic Shoes” was cleverly integrated with the release of “Montero (Call Me By Your Name) — Montero is Lil Nas X’s actual first name — the rapper’s new, “unabashedly queer” (and irreverent) video, as Rolling Stone magazine characterizes it.

“The video depicts several Lil Nas X alter-egos in scenes inspired by history and mythology, including a makeout session with an alien version of himself, a Marie Antoinette-inspired stoning, and a lap dance with the Devil,” the Rolling Stone article explained.

You get the picture. This is not Disney, much less a Kevin Sorbo flick. The glossy video, among other visually striking clips, includes a Lil Nas X alter-ego seemingly falling like lightning from heaven to a hellish underworld.

The cheeky Brooklyn, New York, art collection and trend-exploiter MSCHF bought a symbolic 666 Air Max pairs and, according to several media sources, immediately sold them out at the ungodly price of $1,018 (6 + 6 + 6 = 18, for what it’s worth).

Nike then filed suit for trademark infringement. More on that later.

For now, though, note that the significance of 666 — the so-called hellish “number of the beast” — derives from the Textus Receptus manuscripts of the New Testament, the Book of Revelation (13:17-18). In modern popular culture, the number is commonly associated with the Antichrist and the devil. 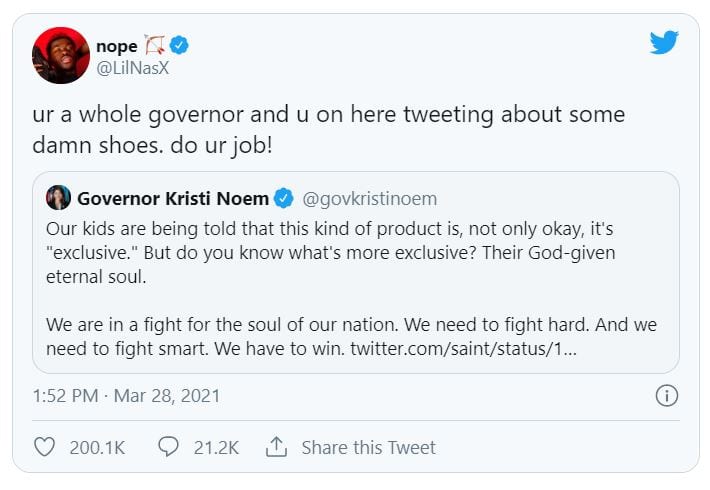 But it was the “Satan Shoes” that got religiously zealous Gov. Noem’s attention.

“Our kids are being told that this kind of product is, not only okay, it’s ‘exclusive,’” the governor tweeted after hearing about the shoe campaign. “But do you know what’s more exclusive? Their God-given eternal soul. We are in a fight for the soul of our nation. We need to fight hard. And we need to fight smart. We have to win.”

It’s par for the course with Gov. Noem, an evangelical Christian who enjoys sermonizing on the floor of the U.S. Capitol during National Prayer Week every year, and routinely invoking God and prayer to solve natural disasters like floods and droughts in our state, and relentlessly promoting godliness.

This all assumes a “God-given eternal soul” exists, which is a permanently unverifiable hypothesis. Certainly not something anyone should be shouting with certainty from the mountaintops and trying to convince kids of. To be sure, it initially didn’t even work very well for Moses on Sinai, if recall the “Golden Calf” story.

Which brings me back to Nike, which reportedly filed suit in New York federal court against MSCHF after its shoe campaign unleashed a tsunami of undeserved blowback against the company by Americans offended with the Satanic messages Nike had nothing to do with — presumably harming its brand. Nike emphatically stated the derivative shoes were produced “without Nike’s approval and authorization” and that the company was in “no way connected with this project.”

It is unclear from the media reports I’ve read what Lil Nas X’s specific role was in the campaign other than as a collaborator, and he isn’t named in the Nike suit, but he did feel the need to push back against Gov. Noem’s soulful tweet:

“ur a whole governor and u on here tweeting about some damn shoes. do ur job!”

If the governor had condemned the unauthorized and illegal use of a trademark to enhance of Lil Nas X’s image as a bad boy, that’s one thing, and a defensible criticism. But to attack someone for putting our kids’ “souls” at risk isn’t defensible, considering there’s no reasonable proof “souls” even exist.

It’s actually not MSCHF’s first time doing this kind of thing. In 2019, it came out with “Jesus Shoes,” in purity white,  using the same Air Max 97 chassis. They were priced to sell at $1,425 (regular Air Maxes go for about $160), the company reported. That first buyer has immedidately listed the sneaker on the resale website StockX for an astronomical $4,000.

The Jesus kicks came with a “golden Jesus on a crucifix as a shoelace charm,” and holy water from the Jordan River, blessed by a Brooklyn priest, is incorporated into the soles, CBS News reported. The ancient acronym INRI was vertically placed on the back of the shoes, referencing the label reportedly nailed to Jesus’ cross at his crucifixion — proclaiming Iesus Nazarenus, Rex Iudaeorum in Latin, translating to “Jesus of Nazareth, the King of the Jews” in English.

The shoe was inscribed with “Matthew 14:25,” referring to this biblical passage:

“And in the fourth watch of the night Jesus went unto them, walking on the sea.”

So, MSCHF, despite the obvious legal and ethical issues of repurposing Nike shoes without the company’s permission — twice — was clearly onto something big with “Jesus Shoes”: sneakers that literally allow wearers to not only walk on water but presumably the same water Jesus reportedly walked on.

In any event, our nonexistent souls remain safe, although the same cannot be said of Gov. Noem as she tears her hair out over the “Satan Shoes.”

March 29, 2021
As Americans flee faith, they embrace astrology and other nonsense
Next Post

April 4, 2021 Why are U.S. "nones" still punching below their political weight?
Recent Comments
0 | Leave a Comment
Browse Our Archives
get the latest from
Godzooks: The Faith in Facts Blog
Sign up for our newsletter
POPULAR AT PATHEOS Nonreligious
1