How do chewing-gum laws in Singapore reflect on U.S. Christianity?

How do chewing-gum laws in Singapore reflect on U.S. Christianity? May 18, 2021 Rick Snedeker

National chewing-gum laws mean Singaporeans face fines up to $100,000 and a maximum two-year jail term just for importing the sticky stuff into the Asian island city-state.

What does this have to do with religion, you may reasonably ask, or even the recent four-year spasm of destructive political chaos in America under the Trump presidency (which is still continuing, to a degree)? Quite a lot, I believe, if you’ll bear with me while I explain.

Let’s start with an instructive, if remotely located, reality.

In 1992, Singapore outlawed not only importing chewing gum but also chewing it. Tough chewing-gum laws were a tight new legally imposed norm to deal with a serious public problem.

In a nutshell, more apprehensive tight cultures are relatively intolerant, with lots of rules and stringent, sometimes draconian, enforcement; loose cultures, on the other hand, are more tolerant and laid-back, and distinguished by fewer rules, less punitive enforcement and greater social flexibility.

What’s fascinating about this theory is that it can pertain not only to nations but to cities, towns or any human group.

For example, culturally diverse California is widely and fairly viewed as one of the country’s most liberal states, whereas, say, Utah, with its largely conservative Mormon population, is seen as one of the more conservative American enclaves. In the same respect, we can safely assume that the American Humanist Association, for example, embodies a more loose, tolerant culture (except toward theocratic evangelists, perhaps) than, for instance, the anti-black, anti-Catholic, pro-violence, quasi-Christian Ku Klux Klan.

To take it one step further, nonreligious people are probably in general looser individually and in groups than devout holy rollers. This is an observation, not a judgment. As Nussbaum wrote:

“[W]hen people ask me which is better—tight or loose—the answer is neither. Both tight and loose confer important strengths to groups (and liabilities)—depending on your vantage point.

“One way to look at this – which I call the ‘Goldilocks principle of tight-loose’ — is that groups that get too extreme—either too tight or too loose—have problems. They have higher suicide rates, lower happiness, and more instability. Extremely tight groups are very oppressive but extremely loose groups have little or no way to coordinate human behavior—what sociologists call anomie. They feel a tremendous amount of unpredictability and also suffer.

“The trick, I think, is that cultures often need to have different levels of norm strength given their varying ecologies but they need to ensure they don’t get too extreme.”

In my mind this is where religion becomes relevant to the discussion. By its very nature, supernatural, God-enthralled religion, with its ancient, “inerrant” holy books, requires an uber-tight culture. It requires this because any loose interpretations of dogma threatens the whole “infallible” enterprise and the traditional status quo. Any fundamental shift is seen by true believers as an ominous threat.

So, as we’ve seen in several thousand years of Christian history, for instance, with its witch hunts, heretic burnings, brutal social blaming and shaming and coercive oppression, constant indoctrination of children, and threats of immortal suffering for commissions of “sins,” the faith is understood to require expansive control of the masses.

Of note here: Christianity remains the most dominant faith in America, as it has been for centuries, although its proportion of the populace dropped below 50 percent for the first time this year and the future doesn’t look bright for the faith. In the meantime, the percentage of nonreligious Americans has surged in recent decades, soaring from single digits to more than 30 percent and driven by huge indifference to faith among the young.

The handwriting is on the wall, as they say, and the apprehension it evokes is making American Christian culture ever more squeezingly tight. Which explains a lot, considering that some 80 percent of evangelicals voted for Donald Trump, who, paradoxically, is possibly the least Christian U.S. president ever and whose personal behavior is morally appalling.

Nussbaum explains that nations or groups that see themselves as under threat tend to be tighter than less apprehensive ones, because they believe rigid social norms will allow them to respond quicker and more coherently to defend against perceived threats.

And Christians have been under existential threat since the medieval Protestant Reformation and Enlightenment, where supernatural beliefs either diverged into heretical new forms or were attacked as irrational. Similar forces are opposing Christianity in contemporary America.

But although tight cultures may be rigid and oppressive in general, as the U.S. evangelical culture currently is, Nussbaum says they frequently give their leaders special dispensation:

“[P]owerful people have more latitude to break norms, and Trump is the quintessential norm violator.”

So, if don’t buy that conservative American Christians adhere to suffocatingly tight political and social norms to further a bogus agenda, I have a two-word reply: Liz Cheney.

Cheney, a U.S. House representative from Wyoming and the No. 3 Republican in that body, was recently jettisoned from her position because she insisted on telling the truth — that the 2020 election was not stolen from Donald Trump. He lost fair and square, as every state election authority attested, along with 60 state and federal judges (many appointed by Trump) and the U.S. Supreme Court (twice).

But some 70 percent of Republicans today still believe he won — “by a landslide,” as he still falsely insists — but was “robbed” of victory.

Like the supposed reality that gods exist (with no empirical evidence), Trump supporters (the lion’s share of whom are Christian true believers) believe that truth is embodied in whatever emanates from their dear leader’s mouth or in his now-banned Twitter tweets. Their faith primes them to believe all kinds of temporal nonsense, as well, like black is white. 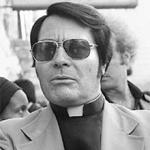 May 21, 2021 ‘Jesus made me do it!' — Why belief in chimera is dangerous
Recent Comments
0 | Leave a Comment
Browse Our Archives
get the latest from
Godzooks: The Faith in Facts Blog
Sign up for our newsletter
POPULAR AT PATHEOS Nonreligious
1