Atheist politicians are still technically illegal in 7 states? Should we fret?

While laws remain on the books in a number of U.S. states to guard against such ancient terrors as “blasphemy” and atheist politicians, apologists today tut-tut their existence as inconsequential because the U.S. Supreme Court long ago ruled them unconstitutional.

But there are consequences, significant ones, wrote Kristina M. Lee, a doctoral student in rhetoric (the arts of persuation) at Colorado State University, in a thought-provoking essay reprinted this month by Religious News Service — “Why it matters that 7 states still have bans on atheists holding office.”

American politicians have shown scant interest in amending any of these obsolete laws in state constitutions, much less removing them. Lee quotes Todd Stiefel, an atheist activist, who wrote:

“If it was on the books that Jews couldn’t hold public office, or that African Americans or women couldn’t vote, that would be a no-brainer. You’d have politicians falling all over themselves to try to get it repealed. Even if it was still unenforceable, it would still be disgraceful and be removed. So why are [atheists] different?”

Lee also laments what she calls “theistnormativity,” a term she uses to represent the idea of “normalization of the belief in God as being tied to good and moral citizenship.” It’s a back alley of Christian privilege in America — Christian because that’s still the nation’s dominant religion. Lee contends that,

“To many Americans, beliefs in God and Americanism has become synonymous. A 2015 survey found that 69% of respondents thought it was important to believe in God to be “truly American.” And Americans are expected to embrace national slogans such as ‘In God We Trust’ and ‘one nation, under God.’ Politicians are regularly asked to participate in public prayers to God before official meetings. And while they can request otherwise, the default assumption is that Americans will make an oath to God when taking public office or testifying in court.

“While there is no ban on being an atheist in the United States, atheists have long been framed as un-American. When Democratic Representative Louis Rabaut proposed adding ‘under God’ to the Pledge of Allegiance in 1954, he argued that an ‘atheistic American’ is a ‘contradiction in terms.’”

This is the backstory of anti-atheism in America and some disturbing consequences, such as normalization of God-promoting signs in schools throughout the land, with Supreme Court encouragement.

Other, perhaps more pedestrian but still significant consequences, according to Lee, include difficulty of political candidates throwing their hat in the ring of local and state elections, and a slew of other cultural obstacles. Writes Lee:

“This anti-atheism extends beyond politics. Atheists face discrimination in the workplace and hiring practices. Parents who are religious often have an advantage in custody cases. Even though atheists are no more likely to commit crimes than theists, stereotypes surrounding atheist criminality and untrustworthiness persist. In court, atheist rape victims are less likely to be believed than Christian or religiously ambiguous victims.”

Indeed, although public antipathy toward atheists has faded a bit in recent years, polls indicate that, still, only 60% of Americans today would even consider casting a vote for one. But that’s somewhat better than the most reviled subgroup, “socialists,” for which slightly less than half of Americans would contemplate pulling a lever for in the voting booth.

Lee reports that while “4% of Americans identify as atheists and about 23% identify more broadly as nonreligious,” research suggests that actually “as many as 1 in 4 Americans is atheist, but that most are unwilling to reveal this, even in anonymous polls.”

Such is the social power of stigma, even in Congress, where publicly self-identified atheists are about as rare as hens’ teeth.

In 2014, the American Humanist Association claimed that “24 members of Congress privately stated they did not believe in God but would deny it if outed,” Lee wrote.

In a 2021 survey of the religious identity of congressional members, Lee reports that, in the U.S. Senate, only Sen. Kyrsten Sinema (R-Arizona) identified as “religiously unaffiliated,” while 18 others members declined to answer the question or replied “don’t know.” In the U.S. House, only Rep. Jared Huffman (D-California) is the only openly non-theistic member of Congress (but describes himself as non-religious, not atheist) and 13 other members (including one Republican) refused to answer the question.

You can see how elected officials are still loathe to touch that third rail of American politics: the word “atheist.”

This is why it’s a serious concern laws remain in state law and constitutions outlawing blasphemy and atheist political candidates, despite the Supreme Court striking them down long ago as unconstitutional.

Their consequences, at least in theory (and if a strong theocratic movement emerges), remain viable. And just the fact that they are there and that lawmakers routinely shrink from anything nonreligious contribute to the so-called theistnormativity of atheist demonization in society.

American need to be disabused of these fraudulent notions that have been in vogue for years among conservatives and remain strong in the U.S. zeitgeist.

The point is, once these pernicious ideas are made law — like “under God” being arbitrarily added to the Pledge of Allegiance — they’re hell to rescind and become a familiar part of the political landscape.

Which is exactly what proponents intend. 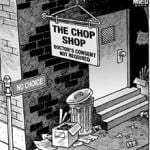 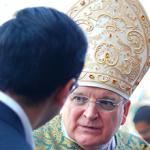