The following post is an edited version of the commencement address given at the graduation ceremony of the Seattle Pacific University MFA in Creative Writing program on August 3. 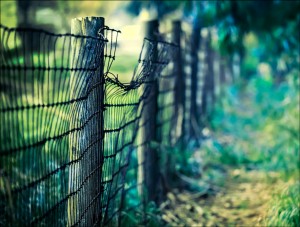 I’d like to share a few thoughts that have emerged from the two texts we’ve been studying together: Cormac McCarthy’s All the Pretty Horses and Richard Rodriguez’s Brown: The Last Discovery of America.

Though they are vastly different books—one an old-fashioned Western elevated to the heights of tragedy and the other a collection of essays that dance around questions of race and ethnicity—they focus on the same subject.

On the literal level they are concerned with the border between the United States and Mexico, but because they are ambitious works of literature they have other goals in mind. These authors are interested in the borders between cultures, customs, sensibilities—how people eat and drink, how they regard their possessions, how they endure the vicissitudes of life.

At a deeper level, McCarthy and Rodriguez want to understand those most existential of borders—the ones that stand between human beings and the even more mysterious borders between heaven and earth.

To cross a border is to encounter difference, to become confused, to find oneself a stranger in a strange land. At such moments misunderstandings can take place, from comic faux pas to instances of shattering, tragic loss.

And yet a journey of this kind can bring about good; it can become an inadvertent pilgrimage, where one discovers truths not only about others but also about oneself. The slight distortion of looking into the mirror of the other can suddenly reveal something unknown with one’s own heart.

A border crossing can bring about epiphany, transformation, reconciliation.

Any piece of excellent writing involves a sort of border crossing. For the reader, the issue is seemingly straightforward: by taking in what you have written, the reader crosses into your imagination, or at least the world as your imagination bodies it forth.

But there’s more going on. The very act of crafting a piece of creative writing involves crossing the boundary between what we know and what we don’t know. The poet Scott Cairns reminds us that writing involves a grappling with the materials we employ: language itself and the literary tradition we inherit.

Only in that agonized and strenuous wrestling match can we lay ourselves open to a truth that is larger than ourselves—and invite our readers to join us in an experience of mutual discovery.

In that sense, reading is not straightforward and passive—the extraction of a message inside the bottle made of words. That sort of reading and writing yields either an instruction manual or propaganda—something static and lifeless, something we think we know but don’t, because we haven’t truly earned it.

The Sunday New York Times Book Review published a short essay by Roger Rosenblatt on the subject of greatness in writing—a topic he admits makes us nervous and self-conscious. Yet he insists we all need great writing.

As you graduate and embark on your writing careers you might feel that greatness is not something you can reasonably aim for. Certainly this program has taught you to shun the sorts of writing Rosenblatt criticizes—writing that is merely brilliant, clever, or exquisite. Still, you may feel that you are too small, too unready for greatness.

Rosenblatt provides a helpful corrective by noting that greatness is not merely grandiosity, nor is it restricted to certain forms like tragedy or the epic. To make this point, he cites the children’s classic, Harold and the Purple Crayon.

In the end, greatness is the result of a willingness to cross borders, to put yourself and your reader at risk of both misunderstanding and epiphany, of division and reconciliation.

In Brown, Richard Rodriguez suggests some of the hallmarks of greatness. He writes:

Books should confuse. Literature abhors the typical. Literature flows to the particular, the mundane, the greasiness of paper, the taste of warm beer, the smell of onion or quince…. Just so will literature describe life familiarly, regionally, in terms life is accustomed to use—high or low matters not. Literature cannot by this impulse betray the grandeur of its subject—there is only one subject: What it feels like to be alive. Nothing is irrelevant. Nothing is typical.

When he champions confusion, Rodriguez is not saying that literature must be difficult. But he does believe that great writing should disturb what is too simplistic in our minds. He is suggesting that our fallen human condition—so often motivated by fear or laziness—tempts us to reduce the world to stereotypes and generalizations.

Abstractions have a way of accumulating like sediment in our souls, hardening our hearts and distancing us from the world. They dull our compassion and tempt us to fall back into self-indulgent dreams.

But as an old woman says to the cowboy hero of All the Pretty Horses: “Between the wish and the thing the world lies waiting.”

Literature, Rodriguez argues, cultivates an awareness of the ways our differences and idiosyncrasies ultimately reach down into the mystery of our common humanity. In short, the path to the universal lies through the particular.

Theologians refer to the claim concerning the divinity of Christ as “the scandal of particularity.” As Annie Dillard puts it:

The ‘scandal of particularity’ is the only world that I, in particular, know…. I never saw a tree that was no tree in particular; I never met a man, not the greatest theologian, who filled infinity, or even whose hand, say, was undifferentiated, fingerless, like a griddle cake, not lobed and split just so with the incursions of time.

This kind of particularity can only be rendered by great literature, literature based on careful observation of the world.

When the cowboy protagonist of All the Pretty Horses encounters Mexican peasants he often hears wisdom where he least expects it. One such peasant utters a line in passing that contains the heart of the book’s wisdom: “No creature can learn that which his heart has no shape to hold.”

Is it too much to believe that literature can help shape the heart to learn something new? I don’t think so. Writing that strives for greatness, that crosses borders in search of truth, that seeks integration and reconciliation not apart from but through our differences, can shape the heart to hold what it needs to hold.

Be willing to risk striving for greatness; cross the borders that keep us apart; stay open to the truth of the world beyond the dream, whether that truth contains tragedy or comedy. And in the process your own hearts will be shaped by love and will help shape the hearts of your readers.

Gregory Wolfe is the founder and editor of Image and the editor of Slant Books. He serves as Writer in Residence and Director of the low-residency MFA in Creative Writing program at Seattle Pacific University. His most recent book is Beauty Will Save the World: Recovering the Human in an Ideological Age.

August 15, 2012 Parenting 101
Recent Comments
4 Comments | Leave a Comment
Browse Our Archives
get the latest from
Catholic
Sign up for our newsletter
POPULAR AT PATHEOS Catholic
1