Reynolds Price and Me: The Tale of Two Rhodes Scholars 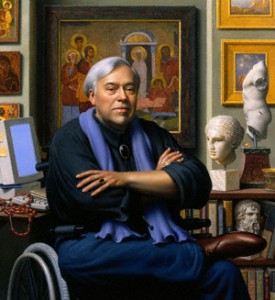 Years passed and fewer and fewer folks compared me to Reynolds Price, but I found myself returning to his work in 2011, the year he died. Price passed in January and that summer I served as hospital chaplain.  Within a week of starting at the hospital, I went looking for one of Price’s books. After A Palpable God, Price had mostly left religion alone, writing novels, stories, plays, and even a little advertising copy.

While his characters experienced spirituality and interrogated belief, Price himself went years before wrestling with his own angels. He called the ordeal that returned his pen to matters of faith “a mid-life collision with cancer and paralysis.”

His memoir of the spinal cancer that left him paraplegic is titled A Whole New Life (1994). All the painful symptoms, surgeries, rounds of radiation, and cycles of rehabilitation are chronicled for readers who follow Price’s move from despair to hope.

That move is what interested me during my summer chaplaincy. I have been blessed with good health, but alongside my bright, beautiful patients who were struggling with terminal diagnoses, I wanted to remember how Price survived his ordeal.

What I found was the moment, one early morning in July of 1984, when Price says he met Jesus Christ. Neither dream nor vision, the encounter was, according to Price, a real meeting. Asleep with his disciples along the shores of the Sea of Galilee, Jesus wakes only to call Price towards him. “I felt no shock or fear,” Price remembers, and then describes how:

Jesus silently took up handfuls of water and poured them over my head and back till water ran down my puckered scar. Then he spoke once—“Your sins are forgiven”—and turned to shore again, done with me.

I came on behind him, thinking in standard greedy fashion, It’s not my sins I’m worried about. So to Jesus’ receding back I had the gall to say “Am I also cured?”

He turned to face me, no sign of a smile, and finally said two words—“That too.” Then he climbed from the water, not looking round, really done with me.

I followed him and then, with no palpable seam in the texture of time or place, I was home again in my wide bed.

Price continued with medical treatment and ultimately lost the use of his legs. He lived the rest of his life in a wheelchair, but continually told the story of his healing by Christ.

That healing interested me as a chaplain and as a Christian. And I found myself admiring Price’s willingness to engage old texts and seek answers for ancient questions that seem, so often, to go unanswered.

After A Whole New Life, I read for the first time another one of Price’s spiritual works, which emerged from a letter he received from a young medical student forced to leave school.

Dying of cancer, the student had read Price’s memoir and wrote to ask more about God and suffering. Price responded first with private letters, but then with public lectures that were published as Letter to a Man in the Fire: Does God Exist and Does He Care? (1999). Price said he was willing to address “the bottomless mystery of suffering,” but only as a believer.

“My belief in a Creator,” he wrote, “derives largely from detailed and overpowering personal intuition, an unshakable hunch, and a set of demonstrations that go far back in my consciousness.”

Oh, how familiar that unshakable hunch.

I, too, had felt it as a child when lighting candles as an acolyte in my home church, as a teenager praying by the tombstone of grandparents I never met, as an adult reading the scriptures from the wings of a brass eagle lectern in the Magdalen College Chapel, and so many other places. Price’s demonstrations were many during my summer chaplaincy, when I listened to the last breaths of the dying and held the hands of the bereaved.

It pains me to know that Price considered himself “a literal outlaw” of Christian churches because of his homosexuality. In one of his final books, A Serious Way of Wondering: The Ethics of Jesus Imagined (2003), Price confessed “though I’m not a churchgoer, for more than sixty years I’ve read widely in the life and teachings of Jesus; and since at least the age of nine, I’ve thought of myself as a Christian.”

Like the mystic Simone Weil, who resigned herself to “the conclusion that my vocation is to be a Christian outside the Church,” Price found his community with Christ beyond the sanctuary.

I never met Reynolds Price, but I carry his meeting with Christ in my consciousness, hold the words of his translations in my heart. Here was a writer, who many assumed would appeal to me for all his imaginary worlds, but who I only ever understood as a brother in the faith.

Pained as I am that he felt himself an outlaw of Christianity, I cherish the knowledge that he and I meet forever in the communion of saints.

Casey N. Cep is a writer from the Eastern Shore of Maryland. Follow her on Twitter @cncep.

Portrait of Reynolds Price above by Will Wilson.

January 3, 2013
Reynolds Price and Me: The Tale of Two Rhodes Scholars
Next Post

January 6, 2013 The Anniversary of My Father’s Death
Recent Comments
2 Comments | Leave a Comment
"Ah, so now the imaginary War on Xmas is transmogrified into The War on Santa, ..."
David Miller How to Win the War on ..."
""Aural" refers to hearing, "visual" to seeing"
merphd The Gutenberg Imagination
""It doesn’t matter when you start the Sinatra Christmas playlist or put up your tree. ..."
C_Alan_Nault How to Win the War on ..."
"Yup."
Max Marvel Finding My Inner Calamity Jane
Browse Our Archives
Related posts from Good Letters