Looking at the Real 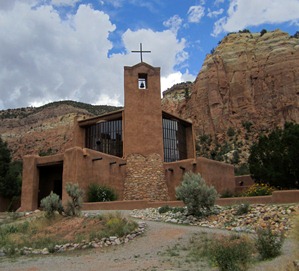 Monks, I’ve found, having spent some time with them over the years, make good company—rewarding enough, in fact, to spend my birthday with some of them on one of my visits last year.

It was the ideal holiday for an introvert, but I came for more than silence and solitude. I wanted a stiff dose of contemplative prayer—straight, no chaser—what the late Walter Burghardt called “a long, loving look at the real.”

The gift of contemplation is precisely that—a gift, neither earned nor grasped—but there are habits, cultivated over time, to better receive that gift, to keep the self from forever stepping in the way like an attention-starved child, to still the mind’s nervous tic of racing in every direction but deeper.

There are also quiet places and good company in which to sharpen those habits. I’ve prayed—which is not the same as reciting prayers—on my bedroom floor, on a rock shelf in the Grand Canyon, and in the cramped seat of a commercial airliner, as well as in churches, monasteries, and shrines.

A failure to pray rarely results from want of time or space; most often it’s simple lack of resolve. Yet, if the artist who wishes his meager talent to flourish chooses to learn from masters, and if the athlete in training seeks out the best in her sport, then the beginning contemplative should exercise with the athletes and artists of prayer.

Perhaps everyone who prays is a beginner, forever learning to stand at the crossroads of humility and eager longing, but even from the prospect of eternity, there are some who speak or write with more experience and greater authority. Attention to their example and wisdom is rarely wasted.

What I particularly like about Burghardt’s phrase is its confidence that patience and affection help the seeker apprehend reality. Perhaps there’s a quick and emotionally disengaged way to approach the real, by whatever means, but I doubt it.

Visionary scientists rhapsodize about the objects of their lengthy studies, and true contemplatives are living monuments of concentrated effort, assiduously paring away a lifetime’s illusions. There are, to be sure, phony contemplatives (just as there are fraudulent scientists) but few of them last long.

Monks who stay, however, often turn peculiar. Some can be downright cranky. Then again, I have no idea what they were like before or where they’re being led. When I’ve asked monks why they chose their vocation, they typically speak of great need and profound longing.

Not one has told me they came because they felt special, unusually gifted, or particularly holy.

What I suppose I like most about monks—the good ones—is their refreshing honesty. They know themselves to be deeply flawed and in desperate need of help, which is why they seek God and the company of others in the same straits.

If contemplative monks are like anyone else, they’re most like recovering alcoholics who seriously work the twelve steps. Contemporary spiritual writers such as Thomas Keating and Richard Rohr have drawn this comparison before. If you love someone in the long, slow process of recovery from addiction, or if you’re there yourself, you may know what they mean.

The monk and the recovering alcoholic know their powerlessness and accept that their problems are humanly insolvable. Sick and tired of the labyrinthine depths of their self-deception, they surrender to a greater authority—a decision not made once but again and again, growing less difficult in time only through long practice, many failures, and with much support.

With encouragement and wise counsel, they conduct an ongoing and fearless moral inventory, adopt new behaviors, make thoughtful reparations, and accept a lifetime of prayer and meditation in search of God’s will and the grace to carry it out.

In acknowledging their brokenness, the monk and the recovering addict make their slow pilgrimage to serenity, even joy. They find neither, however, without humility, which has nothing in common with the obsequiousness of David Copperfield’s Uriah Heep, and everything to do with honest self-regard.

True humility is the fruit of turning that long, loving look at the real toward oneself: a way of tears that ends in a wistful smile.

On my birthday retreat at the Monastery of Christ in the Desert, not far from Georgia O’Keefe’s home at Ghost Ranch, I reveled in a desert silence punctuated with liturgies rich with the lush, melismatic chant of Benedictines who know how to sing and to smile.

Knowing they have nothing to offer God other than heartfelt thanks and praise, the monks carefully attend to their singing. It’s a joy to hear and, when appropriate, to join.

One morning, as I stood in the first row of retreatants, Abbot Philip hit a rare sour note on the small keyboard used to announce the melody about to be chanted. If I had done the same in front of so many listeners, I’d have been mortified and likely would have devoted the rest of the liturgy to mental self-flagellation. Instead, Abbot Philip, seeing me looking at him, cocked his head to the side, and with a sheepish grin raised his hands to the side as if to say, “Oh, well. Wasn’t that a funny sound?”

Then, still smiling, he returned to the work of praising the Maker of the Universe, the work to which he has given his life. And in that place and moment, he and his fellow monks looked serene, joyful, and very much at home.

That’s why I seek the company of monks: their lives call me not so much to be a better person but to become—at long last and after many false starts—myself.

Brian Volck is a pediatrician and writer living in Cincinnati. He graduated from the Seattle Pacific MFA program in Creative Writing in 2007. He is currently writing a memoir and a book about the intersection of health, history, and culture in the Navajo.

February 18, 2013
A Matched Pair of Restraining Orders
Next Post

February 20, 2013 Bible Thumping
Recent Comments
3 Comments | Leave a Comment
Browse Our Archives
get the latest from
Catholic
Sign up for our newsletter
POPULAR AT PATHEOS Catholic
1