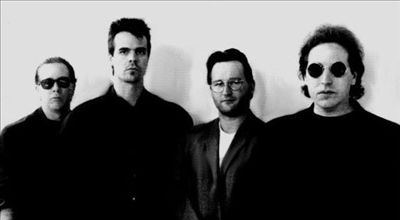 Dedicated to Billy Corgan, who challenged Christians to “make better music” and branch out beyond U2’s musical blueprints in an interview with CNN in September. I challenge you to buy and bury yourself in this album, Billy; it sounds nothing like U2—in fact, Daniel Amos influenced U2!

Just as the films Sunset Boulevard and American Beauty are narrated by dead men, so too is the Daniel Amos song “Now That I’ve Died.” Unlike these undead narrators, however, the protagonist of the song is literally better off dead.

“I lost my stiff, stiff neck and my hard, hard heart / my self-respect is off the charts,” he sings. “Just hanging out here on the Other Side / dead to my pride, now that I’ve died.”

The song simmers for most of its duration and ultimately reaches a boil. In five minutes, the band reimagines the resurrection life, and succeeds in clearing the clouds of harpists who spend all of eternity bored out of their God-fearing gourds.

“Now That I’ve Died” is one of many highlights on Dig Here Said the Angel, Daniel Amos’s fourteenth proper studio recording in a career that spans almost forty years. To fund the record, the band launched a Kickstarter campaign in 2012, hoping to raise $14,000; fans donated over $32,000.

The result is my favorite album of 2013 thus far.

Dig Here Said the Angel finds sixty-three-year-old frontman and lyricist Terry Scott Taylor exploring aging in relation to faith as one who knows he’s no longer the spry, spring chicken who sang on Daniel Amos’s self-titled debut in 1976. At the same time, he knows he isn’t dead yet either—and even when he does die, he apparently plans to live quite triumphantly.

Fans of Daniel Amos’s Eagles-influenced ’70s albums, the band’s featherless, New Wave incarnation on the Alarma Chronicles quadrilogy in the ’80s, and 1993’s Sgt. Pepper-esque Motor Cycle know that the band reinvents itself with each record. While Dig Here Said the Angel finds Taylor and Co. evolving once again, it retains the essence of Daniel Amos. Ambitious, mischievous, at times menacing, and mercilessly melodic, the album calls to mind the works of The Beatles, Talking Heads, Elvis Costello, and Nick Cave, all while sounding exactly like none of those artists.

I find myself attracted to the gravity of this record—not so much a heaviness as a sense of something dense and substantial. Each song deals with life, death, and life after death. Take, for example, “The Ruthless Hum of Dread.” “In a pauper’s field of dreams / I’m walking in between open-mouthed graves / anxious to be fed,” Taylor sings. “And all my buried intentions are groaning for transition / in the raising of the dead.”

But a joy comes with this thematic heaviness, and reminds me of when rainfall and sunshine coexist. Consider the effortless, effervescent “Jesus Wept.” “I found my masterpiece in the discount bin,” Taylor sings. “I pound against the wall of my ancient skin / crying ‘Let me out!’ / ‘Let me out!’”

God’s response to this request? “No, not yet.”

But suffering does not have the final word in “Jesus Wept.” The lyric continues: “There’s not a holy man who doesn’t know grief well / or think the road to Heaven doesn’t pass through Hell / they’ve cried ‘Let me out’ / they’ve heard ‘No, not yet’ / they know before he danced, Jesus wept.” In Daniel Amos’s capable hands, suffering becomes a dark bend in life’s road en route to the New Jerusalem—an inevitable, but finite stretch of hellish highway.

Another album highlight, “The Uses of Adversity,” features a wonderfully wobbly bass line by Tim Chandler that onomatopoetically recalls the words of James 1:6, in which “one who doubts is like a wave of the sea.” Instead of attempting to oust doubt from its perch, Taylor embraces uncertainty in the song’s lyric.

“Don’t send me rain if I bloom in drought,” he sings. “No, don’t send me certainty / if somehow it’s best for me to doubt.” For Taylor to write such a lyric—or pray such a prayer, really—is an act of trust; a vote of confidence in God’s unorthodox methods.

In the song “We’ll All Know Soon Enough,” Taylor defines doubt as temporary—another form of suffering that has a shelf life, expiring when we do. He sings the verses from the perspective of those who believe, but reconsider when other explanations for their circumstances seem easier to swallow.

When the world continually serves us slugs of the “hard, hard stuff”—the sort of suffering that sets us reeling—belief in a benevolent God seems like an absurd proposition. Even Taylor cannot help but question the nature of God in “The Use of Adversity”: “My God, my God, have you forsaken me / or is this grace disguised as adversity?”

Although he initially echoes Christ’s words on the cross, a part of him still trusts God, and wonders if his suffering might serve as a sacrament, drawing him nearer to his Maker. How many times, after all, do curses reveal themselves as blessings in hindsight?

“We’ll all know soon enough,” the song says. In the meantime, we will settle for the perspective of an undead narrator who can tell us what the view looks like from the Other Side. “I’m never cynical, but still a little sarcastic / by the way the cuisine here is pretty fantastic,” Taylor sings on “Now That I’ve Died”—more like “Now That I’ve Lived” if you ask me.

Chad Thomas Johnston is a slayer of word dragons who resides in Lawrence, Kansas, with his wife Rebekah, their daughter Evangeline, and five felines. He is a regular contributor to Image Journal’s “Good Letters” blog at Patheos.com. His writings have also appeared in The Baylor Lariat and at CollapseBoard.com, home to ex-Melody Maker critic/Nirvana-biographer Everett True. In May of 2013, eLectio Publishing released Johnston’s writing debut, a whimsical memoir titled Nightmarriage.

November 8, 2013 I Am Not a Mother: I Am a Human Being
Recent Comments
0 | Leave a Comment
Browse Our Archives
Related posts from Good Letters