Seeing The World As It Is 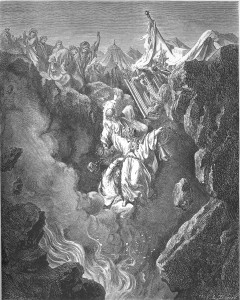 “My religious commitment: to stay in conversation with Jewish stories.” That’s Nancy Fuchs Kreimer in “The Face under the Huppah: Relating to My Closest Stranger.” The essay is a meditation inspired by a drive with her husband from Philadelphia to Boston. Near the beginning of the drive, Fuchs Kreimer and her husband get stuck in a familiar conflict: a disagreement over whose proposed route is best: hers that is shortest, his that sometimes involves less traffic. They’ve been here before: on this highway, on this trip, caught in this disagreement whose stakes to them seem high.

Given the “circumstances”—their late start, the threat of snow and ice in Connecticut, and the building Friday afternoon traffic on the New Jersey Turnpike—her husband declares that “he will be determining” their route. “Alone.”

How does he get away with simply claiming the authority to choose their route? Fuchs Kreimer doesn’t openly protest her husband’s autonomous action. Rather, she devotes the rest of her illuminating essay to considering her response to him in relation to relevant rabbinic texts and others, including Freud, Levinas, and the Israeli novelist David Grossman.

Unlike Fuchs Kreimer in this particular situation, the biblical character Korah, when he sees Moses and Aaron setting themselves above the community, speaks up. How do you get off, he asks them, “raising yourselves above the Lord’s congregation?”  “All the community are holy, all of them, and the Lord is in their midst.” Challenged by Korah and his rebellious crew of 250 Israelites, Moses falls on his face. In other words, he prays for direction in responding to Korah’s challenge.

The Torah doesn’t tell us what Moses said as he lay on his face. The next verse jumps right into Moses’s reply to Korah’s challenge—“Come morning, the Lord will make known who is His and who is holy” (Numbers 16:5).

The second time Moses falls on his face is after God, appears, as promised in the morning. The whole community has come out to see who God will choose: Korah or Moses. “Stand back from this community,” God warns Moses and Aaron, “that I may annihilate them in an instant.” God’s pissed!

This time when Moses and Aaron fall on their faces to pray, they are, as it were, miked: “O God, Source of the breath of all flesh!” they begin their prayer (Numbers 16:22). Are they buttering God up, flattering the Divine before boldly questioning God’s morality?

Are they reminding God, in case God has forgotten who God’s children are, that God is the source of all life—faithful servant and rebel, humble and arrogant, powerful and weak, wise and deluded? Or do they have no rhetorical purpose other than to speak plainly and truthfully to God, beginning, respectfully, by showing they know who they are talking to and then proceeding to raise a question—“When one man sins, will You be wrathful with the whole community?”—arising from how they see the situation?

God immediately scales back his plan. “Speak to the community,” God instructs Moses in the next verse, “and say: Withdraw from about the abodes of Korah, Dathan, and Abiram” (Korah’s co-conspirators).

If anger can color God’s perception so that everywhere he looks he sees nothing but the cause of that anger—it’s you and you and you and—how much more vulnerable am I to the potentially catastrophic effects of anger?

Usually, of course, I experience anger in response to mundane matters—such as when, recently, I disagreed with Laurie on which direction to walk to catch a bus to the central train station in Rome where we would then catch a train to the Vatican. She said left; I said right. What’s at stake? Nothing more—no, nothing less—than my ability to read a map, prove that I can find my way around in a new place, and protect my ego, my story, my me me me!

What’s at stake? The opportunity to see without reacting aversely to the truth that the world (in this case, the map) is not the world I alone see. My story is one story. Laurie’s is another.

So, too, God’s is one story, and Moses’s story is another. I am going to wipe them all out (collective punishment), God says. What if your anger is affecting your perception and judgment? Moses asks.

If the world God sees isn’t the world, how much more likely is it that the world I see—when I’m angry or hungry, confident or insecure—isn’t the world? (Sorry, Wallace Stevens: “She was the single artificer of the world / In which she sang.” “The Idea of Order at Key West.”)

You can—you should!—read Fuchs Kreimer’s deeply insightful essay (included in Chapters of the Heart: Jewish Women Sharing the Torah of Their Lives, a book she co-edited) in which she admits her inability to feel the way teachings important to her say she should feel: Love your neighbor as yourself; love the stranger because we know the heart of the stranger; carry the stranger’s burden.

In my own marriage, I have often missed the opportunity to experience the world beyond my own making. While the normal conflicts and tensions that come up between us, Laurie and me—you want to spend money on what? You didn’t notice that leak?—are of little consequence to others, I sometimes feel as if my entire life depends on their resolution in the way I think they should be resolved.

The beginning of life beyond the narrow experience of self is life in relation to an other—a spouse, a friend, a colleague, a dog, an ocean, God. Every relationship presents the opportunity to see the world as it is, which is always more than one thinks it is. Seeing the world as it is, one stands a better chance of acting wisely, justly, lovingly. That’s worth aspiring to.

July 8, 2014 Quitting the Cancer Battle
Recent Comments
0 | Leave a Comment
Browse Our Archives
get the latest from
Catholic
Sign up for our newsletter
POPULAR AT PATHEOS Catholic
1