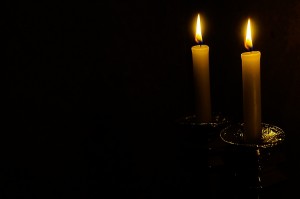 “Hope lost and fear won,” said Udi Segal, the diplomatic correspondent for Israel’s Channel 2 News. Referring to Secretary of State John Kerry’s nine-month negotiations whose collapse in April contributed to the escalation, Mr. Segal added, “I don’t think the people in Palestine or in Israel feel more confidence in those Western, American Kerry-like ambitions to solve our problem with those peace slogans.”

This week, again, the news fills me with despair. But on Shabbat I recover hope. Is this a two-state solution to the problem of being human: six days, despair; on the Sabbath, hope?

This summer I flew in turbulent weather. I gripped the armrest, squeezed my eyes shut, and visualized: land, land, let me stand, once more, on solid ground for peace.

Would a two-state solution look like this: devoting my waking hours to creating conditions in which all can thrive? Say the fathers of the Talmud, “You are not obligated to complete the work, but neither are you free to desist from it.”

This past Shabbat, I joined the congregation in saying aloud, after the Torah service (usually I let my mind, untethered, drift during this part of the service) a prayer for our country. May this land under Your Providence be an influence for good throughout the world, uniting all people in peace and freedom and helping them to fulfill the vision of Your prophet: “Nation shall not lift up sword against nation, neither shall they experience war any more.”

Who came up with the first two-state solution? God, when he counseled Abraham to honor Sarah’s wishes and send Hagar and Ishmael, his son, away. Abraham’s lineage, God says, will continue through Isaac. Ishmael, God reassures Abraham, will also be the father of a nation. Thus, God’s two-state solution. I’ll leave it up to you to decide how that worked out.

Who has time for Palestine, time for Israel? In my community, a few small, devoted, loosely formed groups do; a few passionate individuals make their case in private and public, with raised voices and money. Emboldened by their synagogue, their church, they fight to make that land over there a land for peace for one side if not the other.

Beyond a two-state solution, beyond land for peace: Shabbat. And beyond Shabbat, even beyond beyond—the never and nowhere to which Sabbath prayers point? I could almost feel it, during the Shabbat service, but what I felt is beyond words.

Then I came back to this time, this place, this actual earth where slogans are lobbed like bombs, leaving behind smoking ruins: two-state solution, land for peace.

September 8, 2014
My Garden, the Book of Joel, and God’s Plagues
Next Post