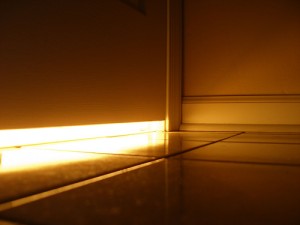 Sh’ma yisrael Adonai Elohanu Adonai echad—Hear O’ Israel the Lord is God, the Lord is one. Even an assimilated, lip-synching Jew like my father knew those six words of Judaism’s signature prayer—a prayer tucked into Jewish liturgy morning, noon, and night.

When I was little, my faith was confined to saying the Sh’ma. For as long as I can remember, I knew the Sh’ma was the prayer of prayers—the one that asked me to stop and listen. It was the prayer I said before I went to sleep—the prayer my devout mother punctuated with a vigorous “amen.” At Jewish day school, I learned that as Rabbi Akiva, one of Judaism’s foremost scholars who lived in the first century, was flayed alive in the hippodrome of Caesarea, he left this world with the words of the Sh’ma on his lips.

The words of the Sh’ma are also written down on a piece of parchment that is enclosed in a mezuzah, a decorative case affixed to the doorposts of a Jewish house. But the mezuzah guarding our back door had disappeared under thick white paint, probably wiping out the blessed efficacy of the whole enterprise.

The Sh’ma said in the plain light of day lands on the ear as a cry, a plea. Listen. To me. The clarion call of the Sh’ma clears space and reins in time. But spying the sliver of night-light that slipped under my childhood bedroom door—illumination that represented silence itself—I implored with all my heart and all my soul for anyone to listen.

To drive home my desperation, I also bargained with God. If I promised to stop throwing away my vitamins, stealing things from kids at school, or hitting my sister in the middle of the night because she could sleep and I could not, would God send peace and its silent partner quiet to me?

As a child, I came to understand that the roles we played in life were most defined at night. I was the older, dowdy sister. My sister was the pretty one, the one with jet black eyes that sparkled—the one my father woke up to show off at the parties my parents threw in our living room.

I knew early on that, like the biblical Leah, I was the less desired sister. Forced by her father, Laban, to switch places with her sister, Rachel, on Rachel’s wedding night with Jacob, Leah was never loved the way she should have been. In the broad sweep of daylight, coming to terms with Laban’s ploy for this woman “of the weak eyes” broke my heart.

But I also learned that sometimes life could be rearranged for the better at night. My father was not the strict father with the McArthur sunglasses making me wear a seatbelt before its safety was universally appreciated, or clapping his hands to summon me to dinner when there was no soda, no candy, and no singing at the table.

Deep at night I liked my father much better than during the day. I presume it was the same for him with me as he looked out my bedroom window and narrated the weather or described the constellations. He hummed Viennese waltzes and Gilbert and Sullivan operettas. Music was his prayer, the music of a silent movie he saw beyond my window. Or maybe he was counting the stars because he couldn’t sleep either.

When I was a teenager I was sure I had outgrown saying the Sh’ma; I substituted for prayer the Top Forty crackling from the transistor radio I hid under my pillow. I read bad poetry and I wrote bad poetry. I was sure that I was the unhappiest, unluckiest fourteen-year-old on earth because God had not listened to me, the Leah of my family.

But now I know that, lurking in the shadows, God had always been with me. I just had to listen for God in the weather, in the dark, in music, in my dreams.

When I had my own children I took out the Sh’ma like a dress that had come back in style. The “sh” in Sh’ma soothed me into believing that God was listening. He heard my words. My children were proof of that.

God had discerned, and was still discerning, my intentions as a tongue distinguishes taste. The Sh’ma is a cry around which every other prayer and wish rallies, a prayer beyond words.

Judy Bolton-Fasman is an award-winning writer and essayist. She is a weekly columnist on family and parenting for the Boston Jewish Advocate. Her popular column also frequently appears on the Christian Science Monitor’s Modern Parenthood blog, the Sisterhood blog of the Forward and the Huffington Post. She is also a contributor to Motherlode — the New York Times’ parenting blog. A long time book critic, she has written book reviews, interviews and essays for newspapers and magazines, including O Magazine, the New York Times, Boston Globe, Washington Post and Christian Science Monitor. She has been invited to speak about her popular weekly parenting column The Judy Chronicles and her memoir-in-progress on National Public Radio and Huffington Post Live as well as to universities, synagogues and women’s groups.

March 4, 2016 Learning Poetry, Unlearning God
Recent Comments
0 | Leave a Comment
""It doesn’t matter when you start the Sinatra Christmas playlist or put up your tree. ..."
C_Alan_Nault How to Win the War on ..."
"Yup."
Max Marvel Finding My Inner Calamity Jane
"I an confused by the use of "aural" here: "In The Gutenberg Galaxy, he explained ..."
William G II The Gutenberg Imagination
"My friend is looking for a Pepper Smith he served in the army with, was ..."
Christine Budnack The Love Song of Pepper Smith
Browse Our Archives
get the latest from
Catholic
Sign up for our newsletter
POPULAR AT PATHEOS Catholic
1