“The Hand On The Mirror”: Can our loved ones speak to us from beyond the grave? 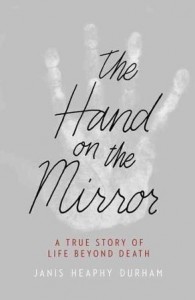 I was having a chat with my mom recently about making a will and telling us any plans for what she wants us to do with her … after she … you know … moves on to the next adventure.

“Do you want to be buried in Massachusetts?” I asked, because that’s where she’s from and I wondered if she’d like to be back with her family.

“Do you even want to be buried?” I asked. “Would you rather be cremated?”

“OK,” I said with a laugh,”I’m going to have you cremated and then we’ll sprinkle your ashes on top of Mt. Greylock.” That’s near her childhood home in the Berkshires.

She laughed. “That sounds fine. I don’t care.”

I gave her an evil little giggle. “OK, then, since you don’t care, I’ll carry your ashes around with me all the time. Mwahahah! You’ll be with me twenty four hours a day! You’ll never escape me! How’s that sound?” I assume not so great, since my mom can be finicky about spending time with me.  The last time I asked if she felt like doing something she said, “Nah, I’m going away with you next week. That’s enough time together.”

By now we were both laughing. “Do whatever you want,” she said. “I won’t be around so I won’t know anyway.”

That conversation was on my mind as I read Janis Heaphy Durham’s “The Hand On The Mirror: A True.s Story of Life Beyond Death.”

Durham is the former publisher of the Pulitzer prize winning Sacramento Bee, a woman with a strong journalistic sense that relies on facts rather than emotions. After her husband Max died in 2004, she began to experience strange phenomena that she began to suspect were Max reaching out to her from the afterlife.

Lights flickered. Rugs moved. Clocks stopped at the exact time of Max’s death. A powdery hand print appeared on a bathroom mirror for three years in a row, on or close to the anniversary of Max’s death.

This woman, trained to look for verifiable facts, found herself at a spiritual crossroads. Could these experiences be real, or was her grief interfering with her ability to deal with Max’s death in a reasonable manner?

Like the journalist she is, Durham set out to investigate the possibility that those we love can reach out to us from beyond the grave. Talking to scientists, mediums, and spiritual practitioners, she began to form her own opinion of the supernatural experiences.

She talked, for example, to Dr. Robin Van Doren, who specialized in the neurological basis for learning before embarking on a spiritual journey after a near-death experience. Van Doren helped Durham understand the idea that our brains act like radios for our conscious energy. After we die, our energy remains.

Dr. Dean Radin, chief scientist at the Institute of Noetic Sciencises (IONS). IONS was founded in 1973 by Apollo astronaut Edgar Mitchell, who holds a PhD in aeronautics and astronautics from MIT. The institute is dedicated to exploring consciousness, both its power and its potential.

Think “Fringe” in the real world.

Dr. Radin’s credentials include an undergrad degree in electric engineering from University of Massachusetts Amherst, a master’s degree in electrical engineering and a PhD in educational psychology from the University of Illinois. He talked at length with Durham about how consciousness not only exists but has quantum properties that affect events and how, using that focus, we can actually harness the strength of that consciousness.

The most fascinating parts of the book were her discussions with experts like physicists and even a rocket scientists. These are learned, educated, respected scientists doing research in brain function, consciousness, after death experiences, and they make educated arguments for the paranormal.

Reading about Durham’s experiences, I have to admit that I would have been a basket case had those things happened to me. An unexplained hand print on the mirror? Rugs moving on their own? While it’s clear Durham is intrigued, I didn’t get the sense she ran screaming from the house. Which is what would have happened if I’d seen the same things.

To be honest, I’m fascinated with the paranormal. And I’m equally as frightened by it. I think that most humans, regardless of their religious bents, are curious about what happens after we die. Is there a heaven? A state of spiritual being? Black nothingness? What do we know or see or feel or think after our consciousness leaves our bodies? Can spirits see me in the shower?

I know I’m not the only one who thinks about this stuff.

If you grew up in a church like I attended as a child, you were taught that God sees everything. EVERYTHING. Not only that, he’s the supreme mind reader, knowing your thoughts and intentions, hearing your prayers said aloud and silently.

There’s no escaping God. Not even in the shower.

If you’ve spent much time in a Christian church, you were probably also taught that we’re not supposed to seek mediums, to divine the future, to have fellowship with the occult. And yet the Christian faith is centered on supernatural beings who have the power to create and destroy, to bring life and death, to intercede and affect events and even physical items. (“Dear God, please heal this broken bone.” “Dear St. Anthony, please help me find my lost car keys.” “Dear Jesus, give me a sign.”) Christians spend a great deal of time in communication with these supernatural beings, asking for protection and intercession, for guidance and direction, for signs and miracles.

I was also taught as a child that the devil sits outside my front door waiting to pounce on me like a lion. And there was that other awesome lesson about the afterlife: that in heaven, I would spend an eternity looking down into hell to see the souls of those suffering because I didn’t tell them about Jesus.

This may be why Durham’s experiences both fascinate and frighten me. If there are both good and bad beings that can see me and interact with me, how do you know the difference? And do I really want to be able to see from beyond?

I don’t know what happens after death. But I believe there is something – and someone. I’d like to think that I can talk to my loved ones, but it creeps the bejeepers out of me that they’re always there, seeing and knowing everything.

Which brings me round to the thing that I’ve been mulling on for years: Angels or spirits? Soul and consciousness? Heaven and another realm? Prayer or communing with spirits? Is there a difference?

I don’t have the answers, but I can tell you this. If anyone is likely to speak to me from the great beyond, it would be my mother, if only to tell me to put her ashes in the closet so she can have a few minutes peace.

Want to check out what other Patheos bloggers are saying about “The Hand On The Mirror”? Visit the Blogger Roundtable!

May 16, 2015
Gates Police and Fire rescue duckling from storm grate (video)
Next Post 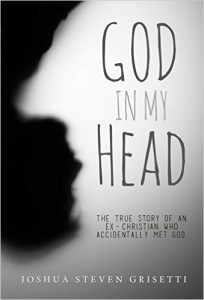 New Visions
A belief in a God bigger than any...
Heavenly Creatures 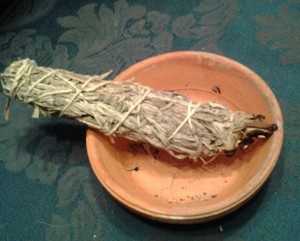 Is the God of Love also the God...
Where is God in all this? Why is God allowing COVID-19 to...
view all New Visions blogs
What Are Your Thoughts?leave a comment
Copyright 2008-2020, Patheos. All rights reserved.