Patheos Explore the world's faith through different perspectives on religion and spirituality! Patheos has the views of the prevalent religions and spiritualities of the world.
In medieval lore, various so-called monsters became famous, with Grendel from Beowulf being one of them who is remembered to this day. The question of his origin was raised in Beowulf, and in the text, it was suggested that he came from the line of Cain:

Even thus did the men of that company live in mirth and happiness, until one began to work deeds of wrong, a fiend of hell. Grendel was the grim creature called, the ill-famed haunter of the marches of the land, who kept the moors, the fastness of the fens, and, unhappy one, inhabited long with the troll-kind’s home; for the Maker had proscribed him with the race of Cain. That bloodshed, for that Cain slew Abel, the Eternal Lord avenged; no joy had he of that violent deed, but God drove him for that crime far from mankind. Or him all evil broods were born, ogres and goblins and haunting shapes of hell, and the giants too, that long time warred with God – for that he gave them their reward.[1]

The implications of this is that, contrary to the most literal and simplistic understanding of Genesis, Noah’s flood did not encompass the whole of the world, for how else could someone with Cain’s blood survive and end up producing the family from which Grendel was to be produced?

Beowulf is famous for trying to merge traditional lore with Christian theology, causing complications such as how and why Grendel was able to be born, but it also shows us that Christians have long tried to merge together the Christian faith to what was known, or believed to be known, from history and even scientific research. Scripture was taken to proclaim the truth, but it was understood to do so in a means which was different from pure history, that it took theological themes and encased them in mythic form. The discussion and debate as to what was to be taken literally and what could be taken as mere allegorical myth can be seen from the earliest stages of Christian history, and different authors, different authorities can be shown to hold different conclusions while remaining united in the Christian faith. Extreme literalism with Scripture was not seen as a necessary component of the Christian faith, and indeed, often seen as to contradict the spirit of the faith and had to be undermined as a result.

St. Augustine, recognizing the difficulty involved in the interpretation of Scriptural texts, tried to preserve their literal meaning, though he did so in a way which differs from what moderns mean by the notion. For him, as with many who followed after him, the literal value of the text is the meaning the author intended (while other meanings and values could be put in it beyond their understanding, thanks to the direction of the Holy Spirit), which sometimes, often, indeed most of the time for Augustine, was based upon a historical reality. Augustine tried to preserve the notion of a history which existed as the basis for Scriptural texts, while acknowledging that reading them without proper hermeneutical strategies would lead people astray: he was not literalist in the modern sense of the term, even when he presented the text and tried to preserve it as a source for historical knowledge. As there were significant limits to the knowledge of world history, many presumptions he used turned out to be wrong, yet how he used those assumptions provide us strategies and methods which we can use for engaging Scripture today with contemporary science and modern historical knowledge.

The question of monsters, of those who were different, was presented in The City of God as both something to wonder about and be amazed, but also as a way of showing how humanity itself can change over time, creating not just individuals who differed from the norm, but whole societies which take on such changes and make for radically different forms of “humanity” as a result. That is, Augustine was able to see God as working evolutionary change within humanity to produce such changes which we would now describe as evolutionary mutations, and he saw how they could result in some radically new creation, that is, what we would describe as speciation.

Augustine, therefore, differs in part from the author of Beowulf as to how to understand the origin of Grendel and any other such monsters which were known to exist in the world. While he agreed that they came from the same root, Adam, and so he wanted to declare them to all be human (and thus not be discriminated against), he did not think they had to come from the bloodline of Cain, so as not to have to deal with the question of Noah, but more importantly, as a way of showing that they should not be seen as morally degenerate and evil just because they were different.

Thus, when Augustine talks about so-called monsters, about those marvels who are unusual, he saw they could be said to be wonderful because of their unique status in the world: “What is clear, however, is that nature produces a normal type for the most part, and a thing is wonderful only because it is rare.”[2] With this as a realization that these unique persons, these monsters which were often believed to represent some foreshadowing of change for humanity, indeed, a divine sign which should be properly explored and understood (not all such signs had to be seen as indication of some great evil was to occur). Augustine, then, unlike many later medieval, did not assume the worst when such monsters, such signs, were evident in the world, and his words should be used to show why any discrimination against someone because they are different from the rest should be rejected; when he talks about monsters, he is not assuming any moral quality to them, but only sees them as marvels which show up in the world and must be seen as a thing of wonder. Augustine did not want readers to assume negative connotations with the word, monster, and so we must take that in consideration when he read him talking about them. This we can see when he wrote:

Just, therefore, as it was possible for God to create any natures He chose to create, so it is no less possible for Him to change any qualities He chooses to change in any natures He chose to create. This, then, is the root from which there has grown the whole forest of portents which the pagans have called monstra, ostenta, portenta and prodigia. There are so many that merely to recall, let alone relate, them here would make it impossible for me to ever finish this work. A monstrum (from monstrare, to point to) means a marvel that points to some meaning. So, ostentum (from ostendere, to show) and portentum (from portendere or praeostendre, to show ahead of time) and prodigum (from porro dicere, to declare things a long way off) all mean a marvel that is a prediction of things to come.[3] 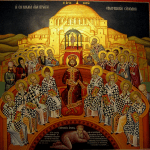 May 26, 2017
Sunday of the Fathers of the First Ecumenical Council
Next Post 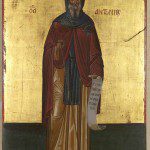